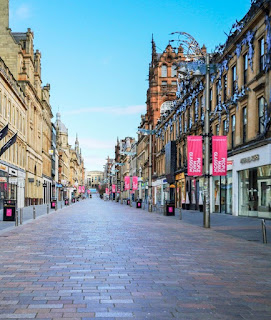 First Minister Nicola Sturgeon's retention of the #StayAtHome message for Scotland is a clear and welcome refutation of Boris Johnson's confusing and dangerous lockdown exit plans.

It puts public health before reckless economics and will surely help save lives.

Alas, it comes as a very late and still too nominal form of political distancing from Westminster and the catastrophe Johnson and his government have unleashed.

A BBC Scotland Disclosure programme has revealed disturbing  evidence of the Scottish government's early failure to get on top of the coronavirus situation.

In particular, it highlights a containment and tracing approach that was highly-approved in a Scottish government policy paper on March 10, yet abandoned two days later on March 12 in order to help bring Scotland into four-nation lockstep with Johnson and the UK.

It reveals how a gathering of international visitors at a Nike conference in Edinburgh on February 26 and 27 allowed at least one entry point for the virus, and how many of those infected were traced in an effort to prevent further spread. Yet, the significance of the cluster was not made public by the Scottish government.

The programme airs the views of notable public health figures all registering deep misgiving about the Scottish government's abandonment of this vital containment strategy, alongside more implied criticism of its policy alignment with Westminster.

It also highlights the tragic case of a family which lost three grandparents following a party at which the virus appears to have spread. Agonisingly, they now reflect on whether earlier advice to avoid large gatherings might have saved their lives.

As an epidemiological study for the programme on the timing and surge in the virus shows, implementation of lockdown even two weeks earlier than March 23 would have likely reduced the fatality rate by eighty percent and saved two thousand lives in Scotland.

Of course, in this moment of 'national unity', we're being reminded that it's not timely or appropriate to be making political points. Yet, in rejection of that same spurious UK lockstep, that's exactly what we should be doing.

If this isn't the point to speak about the politics and political implications of this public health crisis, when is?

For all Sturgeon's more assertive and caring performance during this pandemic, there can be no avoiding the deep and fundamental error her government has made in joining with Johnson and his government's disastrous policy.

We can speculate about the level of Scottish government complacency and uncertainty in confronting such an unprecedented situation. But we cannot accept that  the administration was hindered by any lack of vital scientific advice, notably from the World Health Organisation, or the terrifying forewarnings from what was happening in Italy and elsewhere.

In short, it could have negated the UK government approach and gone its own way under the more assured guidance of the WHO.

Coming inquiries may want to probe not only the chain of scientific advice and policy formation, but also the inevitable political calculations behind it.

Did Nicola Sturgeon's apparent concern to be seen as not acting in a politically divisive way - a political posture in itself - lead her towards the UK option and what she thought was the safest form of political cover?

Lamentably, Sturgeon's choice of political positioning here looks a lot like the same safe centrism that's kept any more radical agenda and the push for independence itself under party lockdown.

And this begs immediate questions of political cause and effect. Had Scotland not been denied independence by a determined UK establishment in 2014, or neutered by the continuing prevarications of an SNP hierarchy, might we now be sitting in a very different virus landscape?

How much more readily might a small independent country, looking to similar others around the world, have initiated its own much more suitable set of preparation, prevention and containment policies?

How more easily could it have closed and controlled airports and borders?

How more quickly and easily could it have implemented and maintained a responsible lockdown?

Indeed, how much more likely, with early test, trace and isolate, might Scotland have even avoided such a major lockdown scenario?

If New Zealand could do all these things, why not Scotland? Even allowing for geographical and border differences, why couldn't a similarly advanced small country make the same kind of decisions?

All told, these are tragic and disturbing questions of avoidable loss and what could have been.

Yet while this programme has shed crucial light on key government miscalculations, it's worth asking additional questions about BBC Scotland's own institutional failings here.

Where was its own earlier efforts to scope out and report such mounting negligence and looming crisis?

As with the BBC at large, where was the critical questioning of the whole calamitous approach being taken by the UK government and Holyrood's fatal part in it?

Given the BBC's own deep role in the 2014 take-down, some will see such exposures as part of an ongoing effort to question the SNP's fitness to govern and undermine the case for independence.

Yet this Disclosure not only provides vital evidence of Holyrood failings, but a perhaps more unintended political message.

While damaged by these revelations, Sturgeon's public standing still appears strong, given her seemingly assured presentation of the crisis, and particularly now with her belated distancing from Johnson. Again, this suggests what might have been had such positioning and very much more been enacted earlier.

But the real lesson to be drawn, and likely taken, from this programme is that Scotland's political as well as public health has been further ill-served by it's default decision to stay linked into the UK.

Whatever the immediate fallout and inquiries yet to come, such evidence shows just how unnecessarily exposed Scotland has left itself to Westminster rule, Tory negligence and actual viral spread.

With no obvious end to the infection and very likely second and further peaks, the Johnson government's lockdown relaxations, failure to test, trace and isolate, drive down the 'R' number and contain borders means the UK could be "destined for a disastrous end."

In this sense, any exposure of the Scottish government's own mistaken and ongoing part in that alarming failure can only be welcomed.

And, even in the still long-term stretch of this pandemic crisis, that understanding can only but strengthen the public mood and political demand for independence.

Another excellent article John. I admire your ability to cut to the chase and write clearly and objectively about how the Corona virus crisis is unfolding in Scotland.

It is refreshing to hear from an independence supporter who is not seduced by the undoubted polished presentation skills of Scotland’s First Minister or afraid to ask questions. Too many are seemingly blinded by appearances, impressed by fine speeches and unwilling to scrutinise her actions or accept any criticism of her and the Scottish Government’s handling of the crisis. As Scotland has closely followed the UK’s disastrous strategy resulting in the highest number of deaths in Europe, this is extraordinary. Ironic too given that Scotland has a reputation as a pioneer in the development of public health.

Why did the Scottish Government follow UK strategy, discontinue testing, tracing, isolating measures, not implement WHO advice, learn from the experience of other countries and listen to the concerns of experienced Public Health experts? Professor Allyson Pollock, a Public Health physician and member of The Independent Sage, wrote to the Scottish Government in March with her concerns.
https://www.allysonpollock.com/?page_id=2906
She has still not received a reply.

The responsibility for emergencies is another issue that needs further scrutiny, although it will take the forensic skills of a constitutional lawyer to interpret the complexities of the Civil Contingencies Act. However it appears the response to emergencies is in part a devolved matter with Scottish Ministers responsible for managing the consequences of any emergencies that impact on Scotland alongside their responsibilities for protecting the health of the people in Scotland. It is therefore legitimate, for them to devise a strategy and implement measures to control the outbreak of the corona virus infection as it effects Scotland.

Thank you again John for your interesting and thoughtful blog posts.

Many thanks. I think you put all that very succinctly, reinforcing the need to ask crucial and critically constructive questions about the Scottish government's primary responsibilities for public health, why it chose to discontinue the containment strategy, and what political motivations underpinned that decision to align so closely with Westminster. And, yes, I do hope supporters of independence will feel able to look with greater scrutiny at these matters in the hope of advancing that very cause.

Concise outlining of Scotland’s position. Independence success relies on the matters above, irrespective of which politician is charged with delivery. Thanks for the link to independent safe, an indicator of where we should be.