Covid-19: UK Government 'back on track', tragically late and heading for political derailment 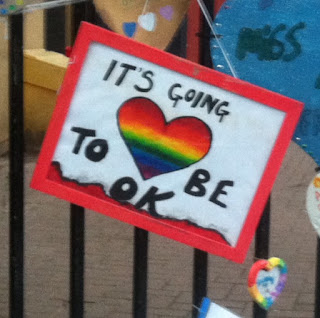 Today sees the return of trace, test and isolate, an essential service in viral containment consistently advocated by the World Health Organisation.

Test and Trace is being rolled out in England, with a coming version in Wales, and another already running in Northern Ireland.

From today, Scotland will also have its own system.

Test and Protect, as it will be known, brings back into use a proven contact tracing approach abandoned on 12 March by the Scottish Government as it fell into joint-policy line with the UK.

Collating and using localised data - all overseen by NHS regional health boards, rather than the private-run, centralised system being rolled out in England - it offers a vital front-line tool in virus suppression.

It comes a day before phase one of relaxed lockdown restrictions come into force in Scotland, a much more guarded and gradual easing than that already being green-lighted to worrying effect by Boris Johnson in England.

We must now hope that, combined with continued public vigilance, this key intervention will be decisive in helping to stem any major second virus wave, particularly as we head towards the winter months and new flu season.

Yet, for all this welcome shift, it's tragic to think that fully 11 weeks have now passed, with a damning death rate and over 60,000 lives lost, since that fateful Thursday on 12 March when contact tracing was discontinued by the UK Government.

And we cannot condemn that UK decision and its disastrous impact without asking why the Scottish Government felt compelled to follow and participate in that fatal policy.

It seems that Nicola Sturgeon's approval ratings can only go up as the 'R' number in Scotland comes down.

And, alongside Trace and Protect, her 'Stay Home' and other public awareness messages have been much more clearly and effectively conveyed.

But so too was her advice back in March to dispense with contact tracing. Saying clearly and consistently that we should adhere to a mistaken policy only reinforces false adherence to it.

That deeply-mistaken UK alignment and policy message might return yet to trouble Sturgeon, a recognition intimated even in her own daily mitigations that, 'yes, we've all made mistakes along the way'.

But whatever the political fallout to come, it's Johnson's own government that will be most duly haunted by this fatal policy shift.

And, as with the UK's lead in abandoning containment, so too was it's late call on lockdown that led to many thousands of avoidable deaths.

As Professor Tim Spector from King's College London has now concluded from the largest Covid-19 data analysis of transmissions due to large gatherings, "people will have probably died prematurely" because of this decision.

Critical examples included the opening of the Cheltenham race event on 10 March and Liverpool's Champions League match the following evening which saw 3000 fans allowed to travel from then virus-ravaged Madrid.

As this study now shows, both locations became major virus 'hotspots' shortly after these events.

Yet, as late as 16 March, Scotland's own National Clinical Director, Jason Leitch, was still defending the policy that had permitted attendance at mass concerts and football matches.

Again, why had the Scottish Government been following this UK line, against all the contrary advice of the World Health Organisation?

We need transparency on the entire chain of policy-making here all the way back to Number 10 as it pushed the whole 'herd immunity' line. 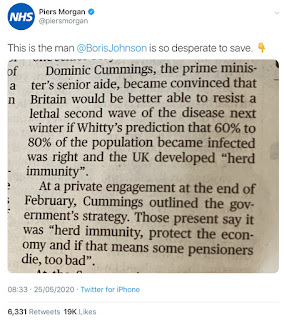 And as the spectacle of Dominic Cummings and 'Durhamgate' continues, it's important to see the more crucial part he played with Johnson in formulating this 'Darwinian' policy.

It's this corrosive relationship that may provide some of the deeper reasons for Johnson's dogged refusal to ditch Cummings.

What was Cummings doing at the heart of a decision-making process that should have been driven only by science and experienced public health advisors?

The story concocted by Cummings over his lockdown road trip, and signed-off by Johnson, is plainly risible. It's a damning example of rules for us, 'exceptions' for them, and will only encourage people to dismiss those rules and help spread the virus.

But it's not even enough here to say that Cummings should be sacked.

The much bigger issue is his role in the policy itself, the outcome of which should really be treated as a major criminal, rather than resigning, matter.

And wasn't it perversely convenient that, amid the great media 'interrogation' of Cummings over Durham, no journalist used this rare chance to probe that dark policy collusion? This is the real story the media should be tracking and tracing.

An entire populace, from life-saving health workers to those most vulnerable souls in our care homes, have been exposed, disregarded and discarded as 'collateral' losses. Dominic Cummings and Boris Johnson stand jointly responsible for that policy.

As John Pilger so damningly writes: "Britain's Covid suffering is a crime against humanity".

And, of course, we have some major precedents for such co-criminality and uncaring abrogation of life.

David Cameron and George Osborne hatched an austerity programme that, according to a major report, led to 120,000 excess deaths in this wealth-laden country.

Tony Blair and Alastair Campbell between them cooked-up the policy and cover narrative for the mass slaughter in Iraq. Now they're both back on the news platforms peddling their 'virtuous anger' and 'country-saving advice'.

And now Johnson and Cummings are trying to spin, deceive and divert attention from their own major crime scene.

Here again we see the truly awesome mendacity of elites attempting to save their own political skins and tawdry 'reputations'.

With Cummings now a derided figure and support for Johnson collapsing, it seems that the emergency impasse of the pandemic itself is the only thing now saving this government from falling completely.

Denounced at every level, including senior religious figures and many within its own party ranks, it stands utterly disgraced.

Yet, like the dark prevalence of the virus, it carries defiantly on. And despite brooding public discontent, it seems to be surviving on wider feelings of weariness, resignation and, like Johnson's populist lockdown relaxations, any feeble signal of a return to 'normality'.

We may have reached a point of 'peak shock' over the fatality numbers and the devastation for so many bereaved families. Even as that curve flattens, the scandal that so many people are still dying each day now barely seems to register.

Perhaps the very onslaught of graphs, country comparisons and wall-to-wall coverage has partly inured, or desensitised, people to the ugly scale not only of mass deaths but the criminal policies behind them.

Still, we continue on optimistic track and in good human hope that things will soon be okay.

But, as our understanding of the virus and its effects grows, so too must our comprehension of the dark forces, policies and decisions that allowed this terrible calamity to happen.

Tracing and dealing with that level of political negligence and criminality will pose as many challenges as tracking and checking the virus.

And, beyond all the scientific and public health lessons for Scotland, the political ones on the urgent need to de-link and fast track a new route forward should now be glaringly obvious.

I think the key phrase is: " Still, we continue on optimistic track and in good human hope that things will soon be okay. "