Today the Scottish Parliament at Holyrood swears in its new crop of MSPs. There's much excitement amongst the freshly inducted intake. The first two woman of colour are there, as is the first person in a wheelchair. Small strides for greater diversity in a parliament now composed of main parties and bereft of actual independent members.

More notably absent will be a ready body of Alba members for independence. That (still shamefully Crown-pledging) ceremony could have included people like Chris McEleny, Michelle Ferns and Kenny MacAskill, all decent leftists determined to push the independence case.

It could have seen a range of other truly Indy-committed Alba candidates, including the vital political force of Alex Salmond himself, preparing an immediate motion to commence negotiations with the Westminster Government on the back of an even greater parliamentary majority of pro-independence MSPs.

Lamentably, their absence has not been regretted in the least by a returning SNP leadership. Rather, it's been gloated over by the party and it's acolytes at large.

Indeed, the shrill and vindictive extent of the celebrations over the breaking of a six-weeks-old minnow party for independence tells us a great deal about the SNP's own deepening authoritarian mindset and priority consolidation of party control.

MP Stewart McDonald's malicious and ugly tweets over Salmond's and Alba's defeat, and the defence of them by once promising young radical Mhairi Black, reveals a great deal about SNP members' zealous placement of party before independence.

As a force for independence, Alba was also mocked and betrayed by much of Scotland's coy 'liberal-left', a much too cosy commentariat that would rather stay safe friends with a neoliberal/centrist SNP and Indy-avoiding leader than be seen associating with a genuine grassroots party trying its best to push Sturgeon and open up new routes to independence.

It's also worth remembering just how much such people sacrificed in leaving their safe SNP positions to join the unknown Alba journey. But they did so out of moral conviction rather than careerist opportunity.

Just as Sturgeon has sucked the joy and energy from the Yes movement these past six years, so does her 'back to my desk' declaration return us to the same sterile business of party securitisation.

The 'stand-up to Boris' bravado will be trotted out a little longer for the party's own Indy faithful. The constitutional 'clash', they're being told, is coming, but not yet. Have your moment, it's saying, then settle down to dutiful conformity. That famed SNP 'discipline' has now consolidated into an even more disturbing obedience to party instruction.

And the same ferocious control has been used to nullify a more threatening party. Alba has, for now, been neutralised by the establishment, it's vital electoral exposure blocked at source by the BBC and STV, all dutifully aided by a virulent attack dog Unionist press, and most readily assisted by a cynical SNP leadership. 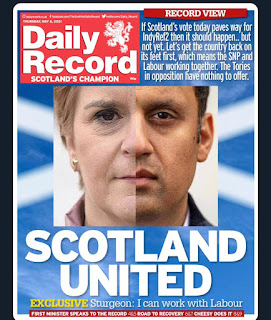 Sturgeon's dalliance with the Daily Record - the rag that sold us The Vow in 2014 (authored by the Record's Murray Foote, since hired by Sturgeon as her leading comms figure) - in helping to demonise Alba is an act of historical betrayal in itself.

What the British establishment wants, it usually gets. But, unlike its efforts to take down the unified Yes front of 2014, the Unionist state relied this time on the internal forces of the SNP itself.

Likewise, the siren voices of a Nicola twittersphere in deriding Alba and gloating over Salmond's misfortune was matched only by its dull silence on the great #BothVotesSNP deception.

"There’s an irony in the SNP suffering from unionist tactical voting, having traduced Alba for allegedly gaming the system. In the end it was perfidious Albion not Alba as Labour and the Tories gave each other hauners – when will the SNP ever learn that the British can’t be trusted? They may write the rules but they sure don’t play by them."

That million plus votes in the end garnered the SNP a grand total of two additional seats. How the Tories and other Unionist parties watched in thankful prayer at this great act of munificence in granting them safe return and banishing the common Alba foe.

This element certainly understood how to 'game' the List, just as Sturgeon knew how to play the List game in order to break Alba.

Because, of course, those 1.1 million SNP List votes weren't actually 'wasted'. They served Sturgeon's precisely intended purpose of locking out any serious opposition to her and the upper echelons of her party.

So, with the Alba 'threat' now contained, how is Sturgeon to manage expectations of her 'pledged' referendum? With the same playbook calls for 'caution', it seems.

It's pretty plain that both Sturgeon and Johnson are on the same mutually-serving page here. Neither will make any actual commitment to a referendum, or timescale for it. Neither wants court action to test the issue. And the endless 'recovery' from a never disappearing Covid threat will be the ready pretext for both in the now indeterminate years of prevarication and evasion to come.

As MacAskill and Hanvey note:

"Leaving aside how there can be recovery without the fiscal and economic levers provided by independence, Johnson can delay matters indefinitely by simply saying “now is not the time”, knowing that he and Nicola Sturgeon are now singing from the same hymn sheet."

And, like the predictable reappearance of Union-saver Gordon Brown, that other tired 'once in a generation' mantra is also back.

Ciaran Martin, the leading civil servant behind drafting the Section 30 order in 2014, notes that this phrase is completely meaningless, a piece of political-speak no more relevant to the legal and constitutional issue of the Union than the claims appearing on the side of certain buses during the Brexit referendum.

In a recent speech, Martin also stated that "a Union is not a Union of equal partners if one does not allow the other the option to leave", warning that, for the first time in history, with any UK denial of a referendum, the Union will no longer be based on consent, but on the force of law. And all that law, with more potential vetoing powers to come, will still reside with Westminster, while all the votes reside at Holyrood.

Martin also noted here that there is nothing particularly special or sacrosanct about a Section 30, a procedure, usually used for other administrative fixes, that was put together in a kind of improvised manner to facilitate the 2014 referendum.

This is the new, unprecedented and dynamic space in which an Alba parliamentary body could have been so effective in constructing more inventive responses. Instead, we're stuck with Sturgeon's fearful deference to constitutional niceties and failure of nerve.

Encouragingly, for all the SNP's squalid efforts, Alba will continue. Indeed, it may become an even more vital refuge for alienated SNP people as we enter the next prolonged period in the wilderness of Indy hopes.

For MacAskill and Hanvey, Alba will grow as both an electoral and extra-parliamentary force:

"Alba is readying itself to push for independence and promote a radical policy agenda whilst preparing the policies on borders, currency and so many other issues that the SNP have shamefully failed to do, as well as contesting council elections next year."

And as the SNP return to their comfort benches at Westminster, having won not a single vote there since 2019, Alba have pledged to use their own limited presence as a disruptive force for independence:

"Room for manoeuvre is limited, as the days of Charles Stewart Parnell and the ability of Irish Nationalists to disrupt has passed. Powers have been centralised and the government dictates the agenda more than ever...That said, there can neither be supine deference to it nor any role taken in the administration of the British State. Partaking in pageants such as the Queen’s Official Opening of Parliament will be forsworn, as will participating in issues that are neither relevant to Scotland nor of concern to her people. Seeking official offices within Parliament is not the role of an MP of a party seeking to be independent of it, and neither’s holding posts that simply entrench British authority, whether over our land or other provinces."

Hanvey has also expressed his own relief in being freed from the “toxic, aggressive and hostile” SNP group at Westminster:

"You are not allowed to have a critical mind. There is no place for debate. It is policy by diktat. It is a really uncomfortable place. It was frustrating to see how many of the SNP cohort were far too comfy with Westminster life - that really galled me."

Despite the establishment onslaught, Salmond is also likely to have an invigorated, ongoing role in such efforts. And as someone who actually did use his own time at Westminster in serving to subvert the UK state, both Sturgeon's circle and the UK establishment will still have to contend with his now re-energised presence.

Salmond made the astute observation on a post-election blogger interview that at no point in history was any just concession or quest for independence ever granted by the British state through submissive begging, or Sturgeon's kind of timid requests.

As the SNP's posturing continues, people for Indy, particularly people of the left, should be looking to help Alba grow in challenging imperious Albion and in holding it's submissive cohorts to account.