Latest from Plague Island: the "moral emptiness and epidemiological stupidity" of Johnson and Javid

After 18 months of serial negligence, the latest decision by Boris Johnson and Savid Javid to let the Covid-19 virus finally rip through a still largely unvaccinated population confirms the true extent of this government's depravity.

The dark implications of their policy have been laid out in a damning statement at The Lancet by a group of eminent scientists. 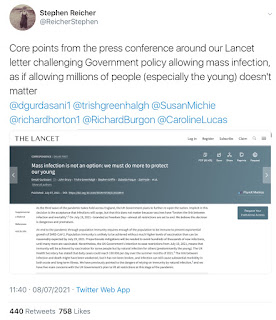 As Professor Stephen Reicher concludes: "This is pure toxic ideology." 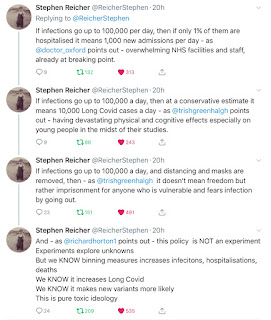 One can but wonder at the sheer scale of the death and suffering this savage elite has already unleashed on a vulnerable and unsuspecting population.

This decision now seals their abandonment.

Nor can we but lament the ethical complicity of leading government scientific advisers in failing to distance themselves from Johnson’s folly.

We may also reflect woefully on the blanket lies and propaganda used to sell these new disastrous directives to a demoralised and fatigued country.

The whole 'coming together' and 'celebratory unlocking' after the last 18 months has been played as a cynical distraction from government culpability.

Mass hysteria over England's part in the Euro football event has been used by Johnson for the same populist purposes, part of the spurious hubris in lieu of 'Freedom Day'.

There will be no 'freedom day', alas, for the many young people who will now fall sick to long Covid, or those still dying from this fast-spreading Delta variant and the mutations it will generate. 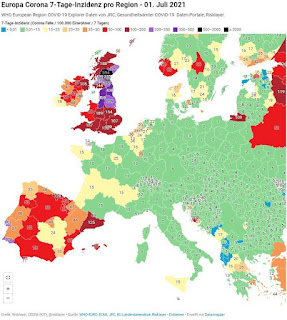 There will be no 'coming home' for many more victims of Tory negligence.
Regions of the UK, notably central Scotland, now represent the highest infection rates in Europe.
The UK now rightly deserves the title Plague Island.

Head of the World Health Organisation, Mike Ryan, has referred to the UK's latest policy decision as "moral emptiness and epidemiological stupidity.”

Indeed. Johnson, Javid and the rest of their crazy cohort can never say they weren't availed of such informed advice and ready warnings.

May there come a day when it is all used as key evidence in a test of this government's actual criminality. 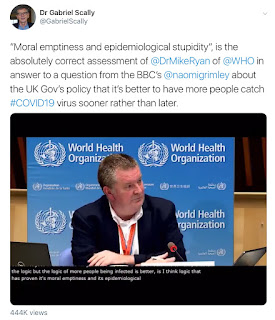