The liberal interventionists, it seems, are out in offensive force again as Cameron, Clegg, Miliband and a cheerleading media drag us into another calamitous war.
Some avowed left/liberal 'anti-imperialists' have also succumbed to the Faustian acceptance of US/UK missiles bombarding Tripoli and Gaddafi's own bunkers, invoking the spurious trade-off that it's the only way of protecting Libyan rebel civilians.
The prospect of many thousands more civilians, pro and anti-Gaddafi, dying as an inevitable consequence of Western bombing, gets conveniently lost in the calculus.
Non-intervention, so the interventionist argument runs, means abandoning anti-Gaddafi forces to certain slaughter - a 'moral abrogation'.


It's a convenient emotional appeal to the public from a military-political assemblage that holds little regard for any Arab face.  As the recent all-guns-blazing US attack on a rebel party gathering suggests, they are all, ultimately, expendable.
More bombing and murder will solve nothing.  But it's the knee-jerk endorsement of Western military 'solutions' by supposedly thoughtful liberals and a default-line media which serves to marginalise the basic realities and possible alternatives for Libya.
As a group of academics otherwise declare:

"We strongly advocate creative strategies of solidarity with the Libyan people while underscoring that calls for coercive external intervention do not qualify. Indeed, it is possible that demands for Western support to the rebels may already have done more harm than good.  In the end, we argue for humility in imagining the role we might play in the course of Libyans' struggle. The international community is neither entitled to take the reins today nor dictate the post-regime scenario tomorrow."

Thus, one can support the movement to oust Gaddafi without advocating another Western campaign of mass killing to 'achieve' it.
In the wake of Iraq, Afghanistan and other Western 'liberations', could we ever presume to bestow upon such forces the mantle of humanitarian protector?
Media Lens provide the relevant analogy:

"A serial killer with a long history of violent, greed-driven crimes might claim to be motivated by compassion in committing further violence. He might even act morally. But his actions could not possibly be based on any ‘moral right’. And the rest of the world would be entitled to argue that, given his record, he was the last person likely to achieve positive results."

As Ken O'Keefe also reminds us, any proclamation of liberal interventionism, particularly regarding the Middle East, should be treated with definitive derision.
Where are the calls for military intervention to protect the protesters in Bahrain and Yemen, or to isolate all those other Middle East dictators, notably Saudi Arabia, eager to see their fellow dictator Gaddafi fall?
Where was the Western demand for a no-fly-zone over Gaza when 1400 Palestinians were being slaughtered by Israeli jets?  More Gazans, including children, have just been bombed and murdered.  Where's the emergency Security Council resolutions calling for their protection?
With the expedient backing of the Arab League, dictators and tyrants all, the West has now secured its tactical boot in the Libyan door.  And, as the showers of million dollar Cruise and Tomahawk missiles show, there will be no military end game short of mass civilian bloodshed and regime change favourable to Washington.
The only interests protected here will be the arms industry, oil companies and other venture investors eager to see the Blair-initiated 'deal in the desert' secured.

Media framing of Western involvement in Libya routinely pitches Gaddafi as the 'rogue tamed by good-guy Blair, but now needing to be punished for killing his own'.  Cameron is, thus, just doing his 'ethical best' now, following on from Blair's 'fine-but-failed' efforts.  Blair's role, and Cameron's support, in the genocide of Iraq, of course, forms no part of that 'ethical' narrative.

As with Britain's past arming of Saddam, George Galloway has, rightly, accused the BBC of going quietly along with the West in supporting Gaddafi this last decade, while he and many others on the left had been denouncing the Libyan dictator.

It's not a home truth the mainstream media appear keen on airing.  Stop the War has been all but ignored over Libya.  Pilger and notable anti-war others may be exposing the real hypocritical utterings and motives of Obama, Cameron, Sarkozy et al, but it's the language of 'necessary intervention' and 'our forces' that gets all the major media attention.
Even the Guardian's Seumas Milne, in denouncing Western hypocrisy, has precious little to say about the liberal media's own language-contorting role in rationalising the war.

From Colonel Bob Stewart to David Owen, the voice of 'sensible intervention' gives soothing reassurance to a public fearing another foreign military disaster.

Another current liberal media favourite performing this task is Rory Stewart, an ex-foreign office point man for the Middle East - the quintessence of the modern career Orientalist - and now Tory MP.

Stewart is eagerly paraded by liberal apologists as the deep and thoughtful voice of 'ethical interventionism'.  Having dutifully considered the "national security arguments" and "moral" objections to the West's actions, Stewarts's conclusions amount to this:


"We need therefore to work out how best to use the no-fly zone, while recognising how insecure and reckless we can be tempted to be."

"Insecure and reckless"?  "Tempted"?  Such diplomatic angst typifies the tortuous liberal deliberations on whether this 'intervention' can be morally validated.  For Stewart and his war-rationalising peers, the discussion may be laboured, but the outcome is predictably the same: the ultimate need for 'our best' military engagement.

Beyond all the soul-searching, reflective words on Britain's and the West's capacity for 'erroneous' foreign adventures, Stewart has nothing seriously damning to say about the UK's real political priorities and the relentless corporate imperatives that drive the conquest and control of such states in pursuit of oil, arms sales and other imperialist dividends.

Instead, we have to seek out other media commentary for credible understandings of Libya, assessments that don't take as their starting points presumptions of basic Western benevolence.
One can only hope for a relatively quick and peaceful end to this conflict and the possibility of a true democracy for Libya.  It's, perhaps, a forlorn hope.  But any argument, from right or 'left', that believes in the quick-fix, or even long-fix, of Western intervention is more hopelessly misguided than the Criuse missiles now being fired in 'protective support' of the Libyan people.
John

Link update: some of the forces assisting the Libyan rebels.
More here.
Posted by John Hilley at 10:07 No comments: 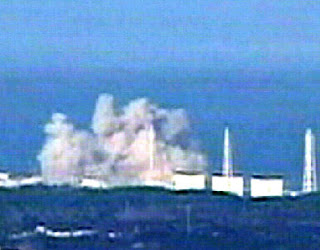 The astonishing natural tragedy of Japan's 9.0 magnitude earthquake and 30 foot tsunami has now been accompanied by another, much more human-constructed, terror as the nuclear reactors at Fukushima Daiichi continue to disintegrate and explode radioactive material.

The eventual scale of this nuclear disaster is, as yet, to be realised.  But, with an increasingly worst-case-scenario of core meltdowns, extensive atmospheric exposure and mass evacuations, the sheer folly of nuclear energy is there for all to see.

It's usually only in hindsight, as with Three Mile Island and Chernobyl, that the 'obvious case' against nuclear plants gets serious attention.  And, as we're now seeing, elementary issues over the Japanese plants seem to have gone wantonly unaddressed.

How could the Japanese authorities ever have permitted the concentration of so many coastal-sited reactors knowing the perennial threat of regional quakes and tsunamis?

Where are so many nuclear refugees now expected to go as the exclusion zone extends further and further from the plant?

If the dangers of nuclear energy seem all-too-evident to an alarmed public, the argument for abandoning it has still not been accepted by some 'environmental realists' who see nuclear as the only viable option to the bigger calamity of carbon-inflicting climate change.

While recognising the extent of Japan's nuclear disaster, and what might yet be learned from it, notable green advocate Mark Lynas insists that any wholesale criticism of the nuclear industry "may not be entirely fair."


"The majority of the world’s nuclear plants are not situated in seismic areas which present a threat along the scale of that faced by earthquake-prone Japan. Those which may be affected by tsunamis are likely even fewer in number. Moreover, the Fukushima plant is 40 years old and was due to be mothballed in February – it was given an extended license, just as has happened in the UK, Germany and many other countries – because no-one could agree on newer, safer designs at the same time as power shortages loomed."

This argument over nuclear location may be partially valid.  But it still doesn't make any other nuclear plant assuredly safe.  Just remember Windscale.  Nor does the age limit of Fukushima and the prevarications over its extended life, always based on economic expediency, provide much in the way of mitigation.

It's a position which Greenpeace and many others within the green movement convincingly reject - and regret, given the particular influence of Monbiot and Lynas as popular environmentalists.

What seems beyond doubt, even to these eco-veterans, is the potential catastrophe now unfolding and the glaring incapacity of humans to deal with nuclear emergencies.

And with this official desperation comes the official lies and subterfuge.  Little wonder we're now seeing a global government effort, as in France and Germany, to offset public anxiety and distrust.

As Michael McCarthy notes in the Independent:


"The reason is an industry which from its inception, more than half a century ago, has taken secrecy to be its watchword; and once that happens, cover-ups and downright lies often follow close behind. The sense of crisis surrounding Japan's stricken nuclear reactors is exacerbated a hundredfold by the fact that, in an emergency, public trust in the promoters of atomic power is virtually non-existent. On too many occasions in Britain, in America, in Russia, in Japan – pick your country – people have not been told the truth (and have frequently been told nothing at all) about nuclear misadventures."

While the Japanese authorities may be doing all they can to stem this crisis, the nuclear industry in Japan have displayed:


"an identical culture of nuclear cover-up and lies. Of particular concern has been the Tokyo Electric Power Company (Tepco), Asia's biggest utility, which just happens to be the owner and operator of the stricken reactors at Fukushima.
Tepco has a truly rotten record in telling the truth. In 2002, its chairman and a group of senior executives had to resign after the Japanese government disclosed they had covered up a large series of cracks and other damage to reactors, and in 2006 the company admitted it had been falsifying data about coolant materials in its plants over a long period."

It's an endemic trait within the industry.  As McCarthy neatly puts it: "Secrecy came with nuclear energy, like a birthmark".

Like the radioactive carcinogens now seeping from Fukushima, the detection of corporate greed around the nuclear business is increasingly evident.

In the US, a mercenary nuclear lobby has preyed on hyped public fears over energy supplies, utilising big-business-leaning legislators to help bend government regulators to its will:


"Add to that the ongoing concern about peak oil, energy costs related to foreign fuels and the environmental problems associated with petroleum/coal energy sources and the shameless lobbyists for nuclear power have never had an easier task getting their product online."

"That may have changed in the wake of the Fukushima disaster.  With the event at that plant, the world was once again graphically reminded of the dangers of nuclear power.  The question is, can we the citizens of the planet, successfully mobilize against a corporate effort to impose this expensive, inefficient, dangerous and ultimately deadly form of power generation?"

Meanwhile, the people of a decimated and radioactive Japan are reliving past horrors, trying, in their amazingly quiet and dignified way, to contemplate the forces of natural catastrophe and the fallout from those built on misguided human design.

There are viable, alternative technologies.  Perhaps the Japanese tragedy might stimulate radical new movements for an end to nuclear madness.

*  Some more here on TEPCO's shocking record of negligence and secrecy.
Posted by John Hilley at 11:37 No comments: