Syria and the selective use of 'terrorism'

As the civil war in Syria intensifies, Media Lens's latest alert, The Right Kind of Terror provides another timely reminder of how our propaganda system works in demonising the West's official enemies while harnessing effective leftist-liberal 'support' for its anti-Assad agenda.

Many on the left will sincerely respond that they completely oppose Western 'intervention' while still holding to a position of solidarity with 'ordinary Syrians' and the 'Syrian revolution'.

Yet, rarely does this include any radical critique of  the liberal media's selective denunciations of violence in Syria. Nor does it, seemingly, see the already Western/Nato/Saudi arming of Syrian and associate 'rebels' as a criminal, interventionist and, yes, terrorist encouragement to that violence.

Only now are we seeing a trickle of media commentary on such on-the-ground involvement, though, crucially, pitched around questions of 'effectiveness' to US interests rather than 'violation of international law' and 'wilful intensification of killing'.

Which begs not just a moral, but very practical, related question: are the left, in any material or political way, helping the cause of humanitarian freedoms in Syria by turning an effective blind-eye to the proliferation of Western-channelled weaponry?

The absence in most media reportage of Western arms and its crucial role in fuelling Syria's civil war is not just some passive omission. It's part of a default-line presentation of the conflict as a 'mass-populist-uprising' endorsed by a 'concerned international community'.

Yet, the much more nuanced religious/sectarian divisions, political allegiances and social support lines across Syria easily defy this conveniently-procured picture.

Caught between a desire to declare template-type backing for another 'Spring rising' against 'another brutal dictator' and the more uncomfortable reality of an opposition itself engaged in ugly sectarian/jihadi bloodshedding, the latter is sheepishly ignored.

Nor has this, apparently, restrained many on the professed left from denouncing those who seek to convey these essential truths as 'Assad apologists'. The gathering vilification of Media Lens, in particular, by a brooding corpus of the liberal-left spectrum helps define just how deeply incorporated many are into the consent-building system of liberal-media hegemony.

All of which brings even many of the 'support Syrians, reject interventionists' into tacit line with the Western narrative and aim of regime change.


"It should hardly need to be emphasised that criticising Western state and corporate propaganda about events in Syria should in no way be interpreted as support for Assad. To suggest this, as a few critics have done, is cynical, ignorant and deceitful. Over the years, we have been accused of being pro-Milosevic, pro-Saddam, pro-Gaddafi, pro-Iran, pro-Assad, and even pro-North Korea, when what we have done is expose Western media bias against these official enemies of the West. As a matter of simple common sense it should be obvious that highlighting systemic bias in the corporate media is important, regardless of one’s moral evaluation of the targets of that bias."

As Libya descends into further Nato-inflicted disorder, the most vital and immediate task for serious leftist writers/activists, most notably those in the West, is not just rhetorical pronunciations of solidarity with oppositionist Syrians, but the purposeful exposure of more media-cheered Western aggression.

That's an expression of true solidarity, part of the long-term exercise of real humanitarian assistance to already suffering Syrians.

John
Posted by John Hilley at 13:37 No comments:

Like the surprise return of some special, absent friend comes Paul Buchanan with his emotionally-captivating album Mid Air.

Beyond his own modest claims, these are songs of exquisite, heart-swelling beauty, with Buchanan's rich, restrained vocal filling the atmospheric spaces between soft, chiming piano and those still-sparsely familiar Blue Nile synths, brasses and strings.

The opening title track conjures the most simply compelling statement of love and wishful observation - "The buttons on your collar, the colour of your hair, I think I see you everywhere" - a perfection of lyrical brevity that resonates through every serenely-delivered track.

As short, imprinted songs, the less seems so much sublimely more.

Amongst the personally-loaded vignettes, Half the World flows in saddened, dreamlike testament to some unaccomplished humanity, slowly rising in mood  - "for the starlight in my suitcase" - and fading to a delicate poignancy of piano, while I Remember You - "I know exactly where you are" - invokes warm, lingering affections and memories of a still-cherished love.

Summer's On It's Way also ambles wistfully to soft bass accompaniment, like a pared-down, child-like incantation of adult hope and expectation. Utterly beguiling.

And there's My True Country, a small poetic masterpiece of abstract longing and belonging that transcends the artifice of patriotism or place, inviting us, enigmatically, beyond - "dance along the edge with me" - and upwards to a 'land' of simpler, contented identification with all that's lovingly familiar and yearned for: "Far above the chimney tops. Take me where the bus don't stop."

Savour all the languid, laconic expressions of loss, love and desire as the quiet instrumental drama of Fin De Siècle gives way to After Dark and Buchanan's last gorgeously drifting harmonies.

John
Posted by John Hilley at 15:17 No comments:

Significant particle discoveries of the week - Higgs and Arafat 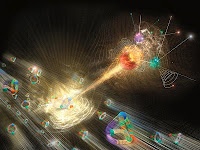 This week will be remembered for the momentous discovery of the elusive Higgs boson, a wondrous accomplishment of scientific theory and painstaking detection that finally confirms the existence of a vital sub-atomic particle giving coherence to all life-forming matter.

As elated scientists gathered in Geneva to praise Professor Higgs and contemplate the mass potentialities of the breakthrough, one could feel a sense of pride in the knowledge-first ethic of science.

The same week will also go down in the annals as the one in which other diligent scientists, from a Swiss laboratory, confirmed particle traces of polonium-210 in the clothing and other personal effects of the late Palestinian leader Yasser Arafat.

Coupled with long-held suspicions that Arafat was poisoned, most likely by Israel, the Palestinian Authority has now granted a request from Arafat's widow that his body be exhumed from his lair in Ramallah for further examination.

Polonium-210 is a rare, deadly substance held and controlled mainly by nuclear-advanced states and valued as a toxic agent for its relative untraceability in the victim's body.

So, while scientists at CERN are deep underground colliding atoms together in hopeful, life-revealing discovery, others are busy finessing polonium, white phosphorous and other deadly cocktails for use against human beings.

The staggering revelations and contrasting appliance of science: on the one hand, Higgs and a community of appreciative physicists working for the pure joy of finding the wonder 'God particle' and enhancing our understanding of the universe; on the other, the dark dealings of a desperate state and its terror alchemists planting cancerous particles and plotting to eliminate a figurehead for the liberation of an occupied people.

John
Posted by John Hilley at 12:37 No comments:

Here's a Guardian editorial on the theoretical possibility of Tony Blair returning as prime minister.

Please look at it in its short but shameful entirety.

And whenever you might feel the generous urge to think of the Guardian as a radical organ for morality, justice and change, just check back on this text as a template reminder of how Rusbridger and his circle have consistently oozed a language of apologetics over Blair, providing, in the process, that vital protective cover for his warmongering past:


"Like him or loathe him, you can always catch Tony Blair's drift – he instinctively hits upon the words to communicate no more and no less than he intends. So when the Evening Standard asked him whether he would like to be prime minister again, he did not answer "sure" by accident; even the rider that this was "not likely" respected the reflex to never say never. Gladstone, Disraeli, Churchill and Wilson all pulled off prime ministerial comebacks, so why not another now? Grover Cleveland was the 22nd and 24th president of the US, while Vladimir Putin has only recently bounced back into pole position, although many would say he never really went away. Mr Blair took the Chiltern Hundreds without compunction the moment he quit No 10; he could equally swiftly, and breezily, fix up a byelection to parachute him back into SW1. He says he has learnt a lot that will help him govern better next time. The five-point pledge card implied by his 2010 memoirs – bomb Iran, cut top tax, free financiers, kill foxes and restore Whitehall secrecy – suggests that is a matter of taste . But he seems to have mellowed a touch since his book; maybe he's even learnt a little respect for international law. Besides, this is no time to fret about the policy details – there is the showbiz to consider. In 2007 John Major likened Mr Blair's long goodbye to Nellie Melba; the coming comeback must demonstrate he is more like Sinatra and Elvis. There can only be one true heir to Tony Blair, and that is Tony Blair II."

"But he seems to have mellowed a touch since his book; maybe he's even learnt a little respect for international law."

Instead of stating simply and without equivocation that this man should be in the dock at the Hague, charged with the highest of war crimes, we're treated to fawning speculations on the comparative prospects of Tony's "showbiz" comeback.

Try relating that shallow, offensive gush to the widows and orphans in Iraq and Afghanistan. A million and more souls lost to Blair and his co-villains, a money-grabbing shyster parading as a 'peacemaker' and what purports to be a 'crusading newspaper' pondering his 'new, moderated regard' for international law.

Too late for all the tragic victims. Too late for Blair's sham "mellowing". And much too late to hope or believe that the Guardian will ever see or confess its own complicity.