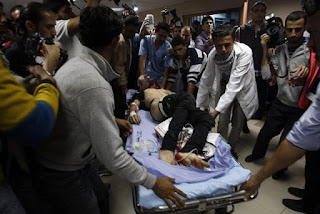 Here we are again. Though, in the greater scheme of Israel's murderous invasion, siege and containment, what ever really changes?

Was it just four years ago that Israel launched it merciless attack on Gaza's civilian population?

Didn't we hear the same spurious claims about 'targeting militants' and 'responding' to rocket fire?

Wasn't there a pending general election in Israel, with each zealous contestant competing to see who could visit the most killing and devastation on Gaza?

Wasn't a certain US president in that same victorious post-election moment, awaiting inauguration and unwilling to condemn Israeli murder?

Didn't we witness the same wider Western support for Israel and hand-wringing at the UN?

And wasn't the media who covered it all not awash with the same, familiar language of 'Israel protecting itself from militants'?

Of course, the latest assault is reported as if little has happened to the people in Gaza in the meantime. The BBC, like other international media, report the 'upsurge' as though the regular attacks, killing and suffering of the past four years, as before that, were some bland, daily routine undeserving of serious media attention.

Nor, in the midst of this 'upgraded' coverage, is there much highlighting of the recent key UN report stating that the situation in Gaza is now so bad, life so intolerable, that Gaza will, effectively, no longer be "a liveable place" by 2020 without emergency action to improve water supplies, electricity, education and other urgent health issues.

Neither before or after the collective punishment of Gaza in 2008/9 and taking of over 1300 lives - an atrocity which Israel and a dutiful media still sanitise as 'Operation Cast Lead' - have the 'international community' paid any serious attention to the plight of the Palestinian people or challenged the wilful planning of ongoing Israeli aggressions.

Denouncing the media language being used to describe the latest attacks, a group of international academic linguists have, as in 2008/9, pointed to the particular targeting of civilians, while noting the extent of deaths and injuries:


"According to the Palestinian Centre for Human Rights (PCHR) report on Sunday November 11, five Palestinian civilians including three children had been killed in the Gaza strip in the previous 72 hours, in addition to two Palestinian security personnel. Four of the deaths occurred as a result of Israeli military firing artillery shells on youngsters playing soccer. Moreover, 52 civilians had been wounded, of which six were women and 12 were children. (Since we began composing this text, the Palestinian death toll has risen, and continues to rise.)"

Contrary to most media misrepresentations, Israel has not been 'responding' to rockets or acting in 'self-defence'. As before, it's engaged in another calculated operation to display its mastery over Gaza and divert attention from Netanyahu's own political weaknesses.

As Ali Abunimah makes clear, the timeline of this latest offensive began with Israeli shelling of the Khan Younis district on November 8, killing a 13-year-old boy playing football. Palestinian resistance fighters responded two days later by attacking an Israeli patrol besieging Gaza. Israel then launched a further attack killing four more civilians, including two more boys playing football. And, as Abunimah reminds us, even after a relative lull, as reported by Reuters, "an effective truce brokered by Egypt", Israel then violated this with the "extrajudicial execution" of leading Hamas figure Ahmed al-Jabari.

For the media, of course, such people are only ever 'killed', never "murdered" or "assassinated".

Amongst all the predictable media labelling of Ahmed al-Jabari as a 'Hamas strongman', there's been little mention of his key role in promoting truce terms with Israel. As Israeli peace activist Gershon Baskin reports, he was killed just after receiving the draft of a permanent truce deal. Baskin believes that "Israel made a mistake that will cost the lives of 'innocent people on both sides.'" Besides the large Palestinian losses and injuries, the deaths of three Israelis from subsequent rocket fire seem to have proved him right.

Again, in deliberately breaking a truce, we see how people who might actually play a constructive part in stemming violence serve no useful purpose for a state built on violent control and zero-sum domination.

But, as Abunimah insists, it's not just this latest murder and provocation that makes a mockery of Israeli claims of 'self-defence'. Is the wanton shelling of civilian neighbourhoods, he asks, 'self-defence'?:

And so the relentless cycle of Israeli villainy, desperate Palestinian resistance, international indifference and media apologetics goes on.

People, civilians, children, die every day in Gaza, in bloody, agonising pain, their suffering still largely unrecognised. Gaza remains under a state of brutal Israeli siege, not a single relief boat with basic aid permitted to reach its shores. Six decades of wilful oppression and occupation - which Israel's control of Gaza still amounts to - and still there are those who ask why Hamas or splinter groups feel the need to send retaliatory rockets into Sderot.

For Israel, its allies and a media who, in default manner, continually repeat the standard line, the issue must always be headlined, bylined, imaged, discussed and in all other ways contextualised as being ABOUT Palestinian rockets. The possibility of defining any such attacks, violence or conflict in an original context - as being ABOUT ethnic displacement, stolen land, illegal occupation and criminal siege - can never be countenanced.

Thus, without seeming to have accepted any criticisms of the BBC's past distortions, reporters like the BBC's Jeremy Bowen could speculate (BBC News 15 Nov) on whether this will be as 'ambitious' an offensive for Israel as 'Cast Lead' in terms of that last, 'more comprehensive' effort 'to remove Hamas weapons in their entirety'.

And so we see how in that small central statement, that standard repetition of 'what it's all about', an unqualified acceptance of the falsely-pitched motives behind both Israel's last onslaught and this one.

So much leeway is given to Israel for 'defending' and 'responding', but never to those who are actually being oppressed, those resisting. The central question is never about why the actual conflict arose or why Palestinians feel enraged enough to resist.

We could, in similar logic, ask why people felt compelled to resist the brutalities of Nazi Germany?Was the defining motive here not about legitimate resistance to occupation and invasion? A whole post-war narrative seems secure on the principal reasons for, and rights to, that resistance. Yet, when it comes to occupied and besieged Palestine, its never about the formative violation or Palestinian right to resist.

Bowen also urges us to consider what has changed since Israel's last major assault, namely the Arab Spring which has brought a new, 'more Palestinian-supporting' government to Egypt. Yet, beyond the token return of Egyptian diplomats from Israel and Cairo's stated condemnations of the Israeli attacks, are we likely to see any significant challenge from president Morsi and his Islamic Brotherhood-based administration?

Not according to Ali Abunimah who correctly notes that there's little difference in practice between Morsi's 'revolutionary' government and Mubarak's client state in their diplomatic overtures and security-supporting roles to Israel.

The politics of the Arab Spring and civil war in Syria do however, signal one key shift. Hamas has now decanted from its exile base in Damascus, taking principal residence in Cairo, while also seeking to build new alliances with Qatar, as evidenced by the Emir's recent visit to Gaza.

Contrary to the convenient portrayal of Hamas as a monolithic entity vowing to annihilate Israel, the truth is of a disparate, complex movement, its main elements manoeuvring pragmatically to build alliances, advance a two-state arrangement and, importantly, maintain its own political authority.

Indeed, besides Israel's provocative aggressions, the fringe Hamas element involved in the rocket fire are also reacting to what they see as safe political entrenchment within Hamas.

Hamas's new alignments also suggests a relative distancing from Tehran, a turn which Israel are seeking to address as it continues to ratchet-up claims of an Iranian 'nuclear threat'. The estrangement has made it more difficult for Israel to use the prior relationship to demonise Hamas.

In the wake of unwelcome disclosures for Netanyahu over the impracticality of any strike on Iran - revealing internal Israeli military opposition and US reticence - this latest assault on Gaza is intended to redress such deficits and provide domestic 'political cover' in the run-up to Israel's January polls.

With Netanyahu threatening to expand the action against Gaza to a possible ground offensive, how readily a Palestinian's life, even a child kicking a ball, can be snuffed-out just to enhance a political image.

But the latest attack is also, just as wickedly, another punishment reminder to imprisoned Gazans that Israel can and will maintain their suffering.

Excellent. Thanks for adding your illumination.