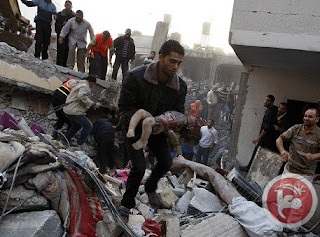 Israel has murdered the entire Dalou family, including five women and four children. All nine, along with two people passing the house, were killed when their home in the Sheikh Radwan district was shelled on Sunday. Amid the devastation, chaos and bewilderment:


"Diggers at the scene of the explosion were scooping rubble from flattened buildings as rescuers tried to locate survivors. Witnesses said there were chaotic scenes as the dead and injured were brought to the Shifa hospital, which has been on emergency footing since the start of Operation Pillar of Defence. The bodies of four young children lay on two metal trays in the morgue, covered in dust and blood. A crowd of onlookers outside became increasingly distressed as the body of the children's mother was wheeled in, covered in blankets."

Another family of two adults and two children have also been wiped out after a shell levelled two houses.

Israel claims that it 'mistakenly' bombed the Dalou home due to a 'technical error'. It would seem beyond belief that anyone could even conceive of such a wicked conceit:


"With the cynicism typical of Israeli government spokesmen, Moshe Yaalon, minister for strategic affairs, blamed the Palestinians themselves for the deaths of women and children. “When they use civilians as human shields, what is our choice?” he said at a press conference in Jerusalem. He was referring to Hamas officials, living at home with their families, who are targeted by Israeli missiles and bombs.Yaalon’s remarks underscored the ruthlessness of the Israeli aggression. “We operate slowly, identify the target and clean the area around it,” he said, as though he was referring to the extermination of vermin, not human beings. “If they position rockets in densely-populated areas, such as mosques and schoolyards, we should not be blamed for the outcome,” he continued. In fact, there were no rockets near the high-profile targets hit this weekend, which included the offices of the Hamas prime minister, Ismail Haniyeh, and the building used as a media center by many journalists in Gaza."

The Israeli hasbara (propaganda) machine is nothing if not brazen in projecting the message that such acts are all in 'necessary defence'. Hence, the Orwellian title given to its latest 'Operation'.  As with the mass killing of 2008/9, should we even dignify Israel's inhumanity by acknowledging the titles given to such slaughter?

The related, dismal truth is that an overwhelming part of the Israeli public endorse their state's brutal treatment of the Palestinians. As Jonathan Cook comments (at his Facebook page):


Netanyahu will be scanning this morning's papers for the results of a survey of Israeli public opinion about his attack on Gaza. There is not too much for him to worry about. An astonishing 84 per cent of ALL Israelis back Operation Pillar of Defence. That means just about every Israeli Jew is behind him, given that Palestinians inside Israel are nearly a fifth of the population. (Haaretz cautiously states only that "more than 90 per cent" of Israeli Jews back the operation. But unless significant numbers of Palestinians in Israel do too, the figure must be much nearer 100 per cent.) The only good news is that a minority of Israelis – 30 per cent – want a ground invasion. In other words, they are happy for Palestinians in Gaza to carry on dying from the rain of bombs and missiles as long as no Israeli soldiers are put in danger's way.

Such is the depressing Israeli view of mass suffering in Gaza.  And little wonder given the venomous language of Israeli media, like this from Gilad Sharon in the Jerusalem Post:


"A strong opening isn’t enough, you also have to know how to finish – and finish decisively. If it isn’t clear whether the ball crossed the goal-line or not, the goal isn’t decisive. The ball needs to hit the net, visible to all. What does a decisive victory sound like? A Tarzan-like cry that lets the entire jungle know in no uncertain terms just who won, and just who was defeated. To accomplish this, you need to achieve what the other side can’t bear, can’t live with, and our initial bombing campaign isn’t it."


"We need to flatten entire neighborhoods in Gaza. Flatten all of Gaza. The Americans didn’t stop with Hiroshima – the Japanese weren’t surrendering fast enough, so they hit Nagasaki, too. There should be no electricity in Gaza, no gasoline or moving vehicles, nothing. Then they’d really call for a ceasefire. Were this to happen, the images from Gaza might be unpleasant – but victory would be swift, and the lives of our soldiers and civilians spared."

How, we may ask, can people speak in such a zero-sum way about murdered and oppressed others? It's a salutary reminder of how a relentless hasbara message of fear and hatred has been foisted by a permanent-war-driven state and endorsed by its ideologically-bombarded populace.