And the award for best averted picture goes to...

Glenn Greenwald has written approvingly of the Oscar night disaster for Zero Dark Thirty and all those CIA figures who helped director Kathryn Bigelow and writer Mark Boal produce this pernicious propaganda.

It seems that the film's claims over the tracking of Osama bin Laden and its rationalisation of torture to find and murder him was too hot to handle for Hollywood's elite panel.

Conversely, the success of Argo as best picture reflects the more benign image of US interventionism. What, after all, could be liberally safer than a quirky tale of 'American ingenuity' in serving to deal with the Iranian hostage crisis?

If ZDT works on the level of 'propaganda wash', Argo, in its multiple evasions and embellishments, functions as "propaganda fable" .

In his acceptance speech, the film's director Ben Affleck also took time to mention the current situation in Iran: "I want to thank our friends in Iran living in terrible circumstances right now."

What does he mean, precisely: that life for Iranians is intolerable under their government; or that Iranians are facing the terrible circumstances of Western sanctions and being threatened and intimidated by Israel and the US? I think we can safely nominate something akin to the former view.

One wonders, though, whether that same liberal queasiness over ZDT was also responsible for Hollywood passing over 5 Broken Cameras and The Gatekeepers.

Whatever the reason, it averted any embarrassing award and potentially awkward acceptance speech.

Still, while Israel will be quietly relieved about the non-award, both films have attained serious international attention, encouraging more such exposures of its daily brutality and state subterfuge.

Here's what 5 Broken Cameras director Emad Burnat would have said, had he won: 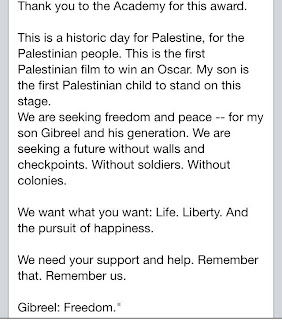 Michael Moore has further defended Emad Burnat over his account of being security-detained at Los Angeles airport.