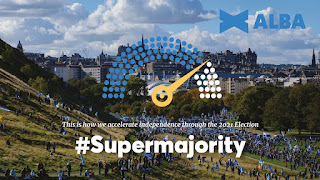 The Scottish Election on 6 May represents the most vital and perhaps last realistic chance we might have for securing independence in the foreseeable future.

In approaching it, we should be aware of what has led to this crucial impasse, and how we can best utilise the opportunity.

In positive anticipation of that task, all independence-seeking people should be directing their energies in making the most assertive case possible for leaving this defunct and all-constraining Union, while being clear about the reasons for still being held captive by it.

How we got to this juncture

It should be glaringly obvious by now that there is no realistic prospect of Boris Johnson or any other political defender of the British state granting, permitting or facilitating the means of its disintegration.

The near-death experience for the Union in 2014, and significant rise in support for independence since, means that it will not risk allowing another referendum. Any measured view of how we now advance independence should start from this primary point of recognition.

As such, relentless condemnation of Johnson and cries of 'he must respect the democratic rights of Scotland' is totally wasted energy. The more useful question to ask here is why Ian Blackford and the SNP are still spouting this futile line from their secure positions at Westminster.

Beyond what we now expect of Johnson and a rigid British establishment lies the more obstructive problems and political failings of Nicola Sturgeon's own party and government.

It should also now be obvious to all serious pro-independence people why the Unionist press, media and wider establishment are pitching for Sturgeon at the expense of Salmond. He's an immediate threat to the Union. She isn't. There's a common set of interests at play here in attacking Salmond and talking-down independence, which is why Sturgeon has been so keen to engage and feed such media.

How we use the opportunity

The sole task for the independence movement is actually gaining independence. And it is now a greater potential reality than at any time in the last, lost six years.

The arrival of Alba is, effectively, the re-manifestation, and all the energetic optimism, of the 2014 Yes movement.

The frustration and resentment many Yes people have felt towards the SNP leadership in the new political landscape since that momentous event is understandable. It’s been a legitimate response to a politics of prevarication and betrayal.

But that shouldn't be used now to cloud rational assessment and mature political action.

Serious advocates for indy within the SNP fold should also recognise that the presence of Alba can only help raise the stakes for independence.

All such forces should be uplifted by the significant political opening now before us.

"Alba has already transformed this from a rather dull election, where the questions were whether the SNP could win a majority and who would come second. Indyref 2 was only to be a debating point, with the SNP accepting a Johnson veto but the Prime Minister making it clear he’s not granting one. There was to be just enough rhetoric to allow Tory and SNP leaderships to rally the faithful without threatening the status quo."

The arrival of Alba - with the gracious endorsements of AFI and ISP - has made this election an indy game-changer.

Whatever one's party leanings, or none, this is a vital chance for independence. Successful electoral returns for Alba will raise the pro-indy parliamentary majority, change the political configuration of the indy parties, and, most significantly, open up the very options for delivering independence.

That's the crucial opening any serious advocate for independence must now engage.

This is not about prioritising one vote over the other.

As The Proclaimers simply state it:

"We're backing Alba for the Scots Parliamentary elections in May. We want to build as big a majority as possible towards putting pressure on Westminster to grant Indyref2. Vote Alba on your list vote."

Impressively, Alba has established itself in a very short space of time. If it can drive up its vote to anywhere beyond 6 per cent share of the list vote it starts to look like an even more effective force.

The vagaries of the D'Hondt system show that independence-seeking voters giving the SNP both votes are wasting their list vote on a massive scale, not only depriving seats to another indy party but keeping Unionists in place.

There's also the reverse paradox here that if indy people don't give their constituency vote to the SNP, any loss of those seats for the SNP only raises its chances on the list, thus threatening Alba's own list hopes.

Think of that constituency vote for the SNP both as a necessary addition to an overall pro-indy majority and - in improving the prospect of more Alba list seats - as a necessary check on any sole SNP control of the indy agenda. Practicality and principle.

It's also important to see that the Unionist media aren't just attacking Salmond and Alba because they see them as a real threat to the Union, they're doing so to try and protect those very Unionist seats which Alba now threaten to take.

More fundamentally, it's also important to remember that all pro-indy votes, as with all pro-indy parties, should be regarded as a means to an eventual end. For serious independence supporters, the entire purpose of the SNP, as now with Alba, is to get to that point.

All other issues, debates and, yes, even political hostilities will continue to be played out before, during and after that event - which, one hopes, will generate a whole further new set of radical political possibilities and openings.

A big Alba parliamentary presence will raise the immediate case for independence. Anyone voting for Alba will expect them to move quickly on pushing for alternative options should, as seems likely, Westminster refuse another referendum.

Even with expected resistance from the SNP, it keeps the issue to the forefront, live and prominent. With any new supermajority mandate, the SNP leadership can finally be pushed into action.

Nicola Sturgeon has made much noise about refusing to work with Alex Salmond. The reality is usually very different in the actual theatre of parliamentary politics. Whatever the case, it's of little relevance to the key impact any Alba presence will have. Disreputable as these statements are in not just taking-down Salmond but talking-down independence, Sturgeon's position, reputation and legacy will become much more crucial if Alba does well. She must at that point raise her game, rather than be seen as continually stalling, and risk being remembered as the leader who split her party and failed on indy.

All independence supporters in this election have much to gain in voting Alba. If they don’t give it their support, a lame, self-serving SNP leadership will only have an ongoing 'mandate' for more indy deferral. If they do help ensure a significant Alba presence, it places all the pressure on the SNP to end that dissembling and finally move with decisive intent on securing independence.