Revelation media - a guiding hand behind Scottish Friends of Israel 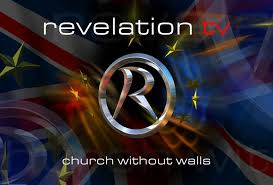 While reluctant to give overdue notice to Israeli propaganda, a Scottish Friends of Israel (SFoI)decision to form street stalls as a means of countering pro-Palestine campaigns suggests a relative need to highlight some of their Zionist network, religious backers and hasbara output.

In an edition of televangelist channel Revelation TV (24 July 2015), presenter Simon Barrett has been talking to Nigel Goodrich, Co-ordinator of SFoI, about their campaign.

Goodrich has been instrumental recently in setting up pro-Israel street groups in Dumfries and Galloway, Glasgow, Edinburgh, Aberdeen and elsewhere. 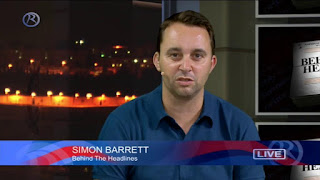 As well as producing the Middle East Report and other output at Revelation TV, Barrett is Communications Director at BICOM, the British-Israel Communications and Research Centre.

The video's content, Barrett's presentation and Goodrich's commentary are all part of a Christian Zionist collaboration. Allowing useful insight to the Zionist support network, the programme peddles the most blatant pro-Israel propaganda, all couched in a language of 'saving grace', as opposed to the 'hateful' motivations of those campaigning for the Palestinian cause.

It's a remarkable kind of 'human loving' that can, with such sanctimony, castigate the 'aggressive' actions of pro-Palestine campaigners while denying and shielding Israel's illegal occupation and mass murder. There's nothing, of course, in this cringing show about Israel's ethnic cleansing of Palestinians (The Nakba), its relentless flouting of international law, its multiple violations of human rights, the apartheid treatment of its Arab 'citizens' or even the most basic humanitarian concern for Gaza and other suffering Palestinians.

I won't say much more about the overall content of this squeamish production. It's an uncomfortable piece to watch - including the last, sickly musical section. Viewers can make their own assessments.

But, with SFoI trying to mobilise its street message, it's important to highlight a disturbing (and possibly litigious) message running through it: that pro-Palestine campaigners and sympathisers are motivated by a particular hatred of Jews.

"Can you share with us who are not Scottish, who don't live in Scotland, the hostility pretty much towards Israel and the Jewish people up there...?"

Note how neatly here Barrett connotes 'Israel' and the 'Jewish people'. Goodrich, citing the 'principal motivations' of the Scottish Palestine Solidarity Campaign (carefully allowing that there may be 'some exceptions'), replies:

Note that, while focusing on the SPSC, little differentiation is offered here or throughout the video between them and any wider pro-Palestinian feeling in Scotland. As in Barrett's question, the alleged feelings of the SPSC are implied as being part of a 'deep problem' of anti-Israel and anti-Jewish sentiment in Scotland at large.

"I was speaking to a Jewish American student only last week at a meeting of Edinburgh Friends of Israel, who said - she's a Master's student - that her professor said to her that he had failed two of her essays because she is Jewish and supports the state of Israel. That's how bad the situation is."

And, indeed, it would be if proven to be true. However, if no corroborating evidence can be offered, it stands as a deeply-contentious allegation.

Selections of SPSC-led pro-Palestine demonstrations against Barclays Bank are then shown, after which Barrett asks:

"What if you were Jewish or you were an Israeli walking past that demonstration, how as a Jewish person or an Israeli, how would they feel knowing that their nation is being attacked like that in such a way?"

"I think you'd be scared. You'd think to yourself, well, do we have a future here? Scotland historically has been very supportive of Jewish people. Somebody said to me that it's one of the few countries in Europe where no Jew has ever been murdered for being Jewish. I don't know if that's true or not. But that seems to be changing."

The strong implication here is that serious violence against Jews in Scotland is happening, with worse looming. No evidence of such is offered.

Goodrich also stresses that his SFoI groups are all "pro-PalestINIAN" (he emphatically spells out the latter letters), making the important distinction between 'pro-Palestine', something that such groups cannot, of course, countenance as it would involve the actual support of Palestinian rights. In truth, SFoI are neither pro-Palestine or pro-Palestinian.

Barrett further asks Goodrich why he thinks there's such a particularly prevalent pro-Palestine feeling in Scotland - noting, in passing, that Alex Salmond has also been "incredibly hostile" towards Israel, and that "anything that he could possibly do to hurt Israel, he was willing to do."

Goodrich alludes to the relative socialist political culture in Scotland as one possible explanation, but, conveniently circumventing this, goes on to specify:

"The problem is anti-Semitism, masquerading as being pro-human rights. The move to de-legitimize the state of Israel is the new anti-Semitism. We have to make that case. We are making that case...thereby upholding the truth."

This is entirely typical of the pro-Israel lobby in seeking to equate being anti-Israel with being anti-Semitic. It's a desperate but deeply pernicious tactic. Indeed, such claims are not only deceitful but, arguably, a provocative incitement to hatred against people campaigning for and supporting Palestinian human rights.

I can't speak specifically for SPSC, not being part of that group. But I've seen no evidence that theirs or any substantive part of the widespread public support in Scotland for Palestine and Palestinians is motivated by a core hatred of Jews. It's informed, much more rationally, and commendably, by a basic human objection to Israel's conduct as a state, and it's wilful oppression of Palestinians.

Being more closely connected with Glasgow Palestine Human Rights Campaign, I can say categorically that this group, also comprising people of varying religious faiths - including Jews - and none, are motivated purely by humanitarian impulses, a conscientious concern to highlight and help challenge an historic injustice, and to offer support to Palestinians most badly affected. The message that this is fundamentally a human rights issue is constantly reaffirmed by GPHRC.

Very importantly, admirable bodies like Scottish Jews for a Just Peace (as with Jews For Justice for Palestinians) are also a vital part of that progressive, humanitarian network in Scotland. In stark contrast to the complicit Friends of Israel message, their unequivocal refrain to Israel is: Not In My Name.

Do people have the civil, peaceful right to demonstrate against Israel and organisations defending, promoting and concealing its aggressions? Yes, without question. Is there a similar moral case for Boycott Divestment and Sanctions, helping to highlight businesses, such as banks and arms companies, deeply involved in the barbaric killing of Palestinians? Again, assuredly yes. It's the same question of conscience and legitimate action that's informed every civil rights movement, from the US to South Africa.

The wider issue of anti-Semitism should not be denied. But it's always much more productive to try and see where such hatred and resentment comes from. The reality is that much of it stems from a reaction to Israel's brutal treatment of Palestinians and its key part in colonialist control of the region.

It's the same kind of reaction to Western aggression in Iraq, Afghanistan and elsewhere. You can't invade and steal lands, murder people en masse, occupy, terrorise and lay siege to entire populations without there being some kind of fallout hostility towards those perceived to be part of that occupation and control.

Friends of Israel-type organisations have no serious interest in exploring the root causes of hatred as a way of moving forward, mendaciously fixated, as they are, on repeating selective symptoms.

As previously noted, it's a sign of growing public awareness over Israel's brutal conduct that such groups now feel compelled to come on to the streets, trying to defend the indefensible. Their literature is riddled with pro-Israel distortion, comprising not the slightest real "pro-Palestinian" sentiment or genuine concern for a justice-based peace.

Encouragingly, understanding of the actual underlying causes is growing. Hopefully, real justice for Palestine and Palestinians will prevail. But no illumination of such truths, or compassionate regard for suffering others, is likely to be aired on Revelation TV.

Is it any more likely to be shared on BBC TV? I think not. Such is the lamentable absence of real context and critical enquiry across the media 'spectrum'. While people like Barrett indulge in Israel-serving rapture, fervent disciples of 'BBC impartiality' like Lyse Doucet can deliver unto viewers the 'two-sides-to-blame' message of Gaza's destruction - a 'gospel' of mitigation and deceit with much more intense and far-reaching effect.

Still, it's useful to shine a critical light on all such forms of propaganda and its 'higher guidance'. From evangelical presenters to establishment journalists an instruction to dutiful, complicit silence is being followed 'from above'. That's no small revelation.
Posted by John Hilley at 07:08

Thank you John, a cogent, humane and, in the circumstances, very reasonable dissection of a pro-Israel group and the way the arguments are always framed - being anti-Israel is the same as being anti-Jewish or anti-Semitic. It would be as if being anti-Amercan because of their wars was the same as being anti-Christian or anti-Americans in general. All countries have leaderships capable of doing horrible things which significant numbers of their citizens might oppose. The sheer horror of what is happening the the Palestinian people, particularly in Ghaza, would certainly excuse some biting rhetoric which you've managed to avoid, it's a very compassionate article.

Thank you kindly, John M. Your points on these false equations and what states do in opposition to their citizens' views and interests are well stated.

One thing that constantly intrigues me is how such advocates for Israel can be so wilfully blind to the occupation, killing and persecution of Palestinians. Even in seeking to make the case for Israel's continued existence, what kind of mindset could fail to see and renounce the horrors being perpetrated by 'their state'?

That suggests multiple reflections on propaganda and the deep socialisation of those who support such oppression. This, it seems, ranges from a kind of merciless approval of militaristic control and punishment to a more liberal calculus of mitigation - that which rationalises the preservation of one's own continued 'wellbeing' against the 'necessary' persecution of others.

This, of course, can be widely observed, as in public support for Western aggressions. It's all part of the same psychology of power that can persuade people to support the invasion, inflicting of pain and elimination of 'threatening others'.

In the case of Israel, that rationalisation manifests itself as a kind of national psychosis on 'defence', helping to mask the wickedly offensive actions of the Israel 'Defence' Forces, while giving vent to a zealous triumphalism over that which has failed to break 'our higher Zionist resolve'.

This defiance and 'superiority' is openly displayed by settler types, but it reaches much deeper into 'moderate' Israeli society - without which no such colonialist occupation, war economy and apartheid state could be maintained.

The ways in which Christian Zionism zealously wraps itself around all this tells us, in turn, much about the support network Israel continuously relies on.

Again, this brings one's thoughts back to the absence of real, proactive compassion, and the seemingly evangelical disregard such Israel-supporting groups have for suffering others. It's not to claim that pro-Palestinian or any other civil rights advocates have some monopoly of moral virtue - we're all human beings shaped by a complex myriad of humanitarian impulses, political socialisation and self/ego-rooted motivations. Rather, it's to ask, in a spirit of rational enquiry, just what kind of deep moral abrogation and lifetime indoctrination informs the language and positions peddled by power-supporting organisations like Friends of Israel.