﻿It's that great exercise in 'participatory democracy' again, the General Election. And, as dutiful BBC headlines boom with party claims of 'stark choice', just think, rather, 'easy interchangeability'.

As the coy Channel 4 drama, Coalition, unwittingly showed, you could have given any variation of the main parties the keys to Number 10 without remotely alarming the Establishment, City elite and corporate forces who really govern us.

2010 or 2015, as ever, it's the same cosy consensus, the same conservative cabal, committed to corporate capitalism and the continuation of callous cuts.

And there's essentially little difference, either, when it comes to the 'big UKIP issue': immigration. 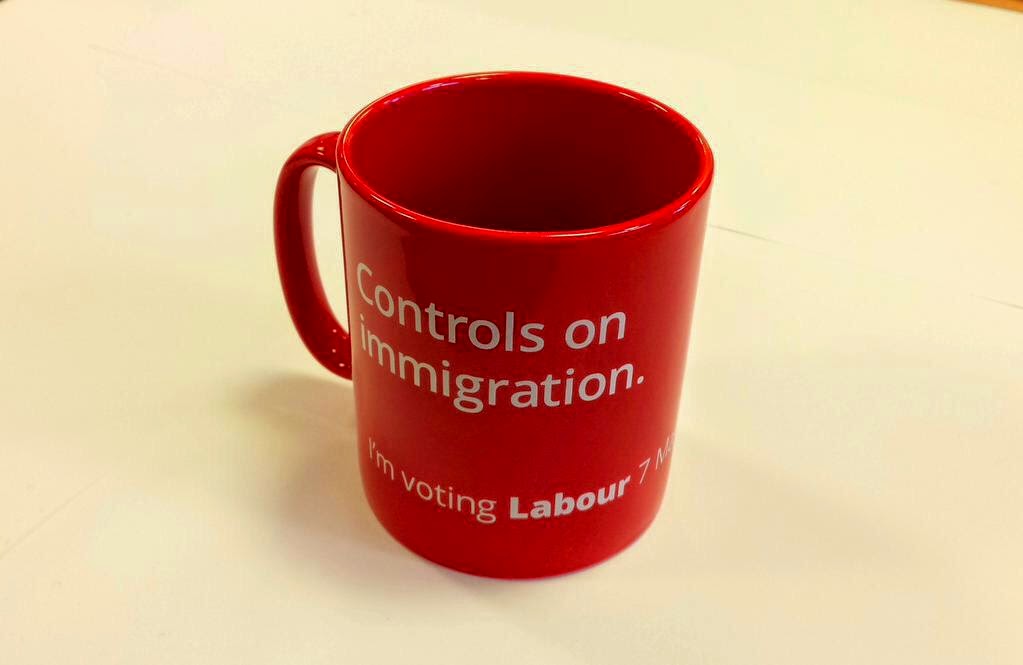 No need to posture like true-English-pint-of-ale-man Farage when you can sip like a quiet liberal xenophobe from your very own Milibranded 'control those migrants' Pledge 4 tea mug.

As the Artist Taxi Driver, in his wonderfully convulsive voice, reminds us, this is no spoof.

After lauding his 'triumphant' performance with Paxman, Owen Jones tweeted in an apparent desperate 'appeal to Ed':


“Fancy a brew in my ‘Controls for immigration mug’?”. Seriously, Labour. Scrap your Farage wannabe mugs and give people some bloody hope

But what kind of real, radical hope is Jones and others among the 'keep with the People's Party' left-establishment asking us to hold on to here?

Beyond the clone neoliberal parties, Westminster media babble and Polly Toynbee warning us of our 'responsibility to vote', just what qualitative political options do we have? In particular, what's on offer from New Improved Labour that could even remotely help initiate a transformative agenda?
﻿﻿﻿﻿﻿﻿

We also now learn that David Cameron won't seek a third term if the Tories win the Election.

Cue same excited media chatter over Cameron's motives. Is he a spent force? A liability? Does he really just want more family time?

Well, here's a couple of clues as to his dominant influence, and what he might more readily have in mind.
As observed by Peter Hitchens, this is:
﻿﻿
"David Cameron, who once called himself the ‘heir to Blair’, who speaks often to Mr Blair on the telephone and who has several times invited Mr Blair to Downing Street. My photograph shows an occasion in 2012 when ex-premiers gathered there to meet the Queen."

And as Peter Oborne, in a recent damning review of Blair's wealth-enhancing career, suggests:

"The Conservative Prime Minister – who once declared himself the “heir to Blair” – may be planning a similar exit route."

Blair has not only set the template for political criminality and brazen evasion, but how, most graspingly, to feather the financial nest on leaving office. A logical and likely model for Cameron to follow.

And all in keeping with the constant revolving-door relationship between politics and big business.

From Thatcher to Blair, Brown to Cameron and Clegg, the neoliberal project continues unabated, while the contrivance of 'political choice' remains drearily familiar. And for all his Jones-approving efforts, nothing Miliband stands for remotely undermines that line of uniformity. They're all safely interchangeable.

Aside from the political frisson of a likely SNP surge, hopefully driving-on the mood in Scotland and elsewhere for a radical, independent alternative, we're only delaying the day of realisation in rejecting this whole dead-end politics for a new mass-street, people-directed one, akin to that still being born in Greece and Spain.

As we consider the true extent of the void, it's inspiring to have a vein of real human politics projected by compassionate street-thinking people like Russell Brand and the Artist Taxi Driver.

And the one crucial thing they help remind us of is the stark absence of meaningful choice under this loaded, archaic and elite-serving system. It's not just a question of whether we should be voting. It's about the greater understanding of how we're being ideologically mugged.
Posted by John Hilley at 09:27

The article prompts me to ask, is Mr Hilley inferring he likes Hezbollah better than he likes Israel? Perhaps his response would be, perhaps or neither, while he's mainly drawing attention to another's real politik, which, given the hellaciously convoluted deathly situation, should not be totally surprising to students of politics.

I'm afraid I find your question and observation rather convoluted. Perhaps you could simplify?

do countries sometimes lie about neutrality for perceived self-interests ?

is Israel expected to medically help a wounded hezbollah soldier?

isn't hezbollah a proxy for iran?


It's not a fear of Hezbollah or any other opposing force, per se. It's about Israel seeking to maintain a stolen land, a wicked occupation, an oppressive state and an apartheid system. All of its subsequent actions in the region, much of it cloaked in a feigned hasbara language of 'neutrality' and 'self-defence', stem from that historic wrong. It's why Israel will always be a militarist, violence-based entity. It's about zero-sum power and selfish survival. Nothing and no one else matters. That's why it's ready to play out alliances with forces like al-Qaeda.