Ten days to save archaic Britain, or rip it up and start again

The No establishment are in deep panic mode, screaming that there's only ten days now to save 'our cherished union'. Ten days for the 'best of British nationalism' to stand up and be counted.

Not, for the BBC and our 'leading' media, ten days left of healthy, vibrant debate on the deep problems many now see in that archaic, warmongering union. Not ten historic days in which to assert our democratic opinions and rights.

Just ten angst-ridden days in which to rescue a failed state, a failed politics, a failed economics.

A small selection of the noble call to arms:

The BBC dutifully announcing the 'crisis', in its review of press output, without, of course, any mention of its own establishment part in hyping the 'emergency'. 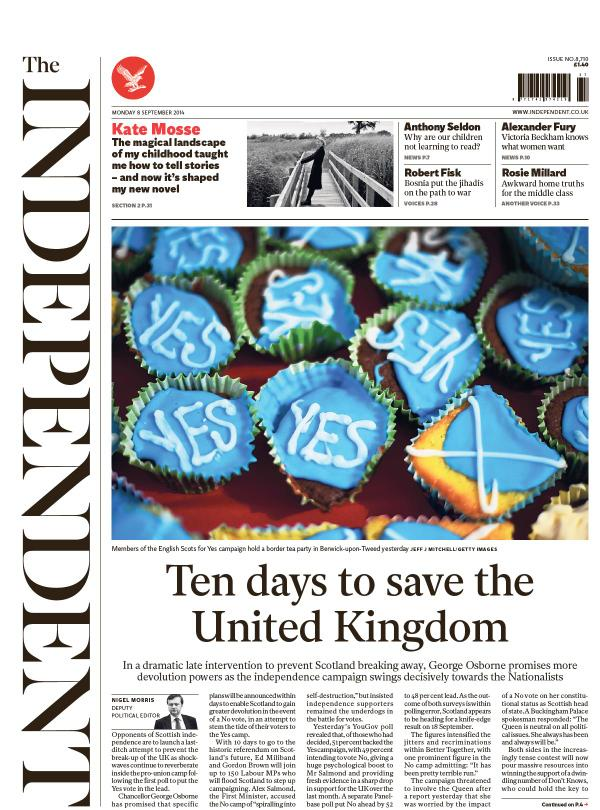 The Independent's front page: 'Ten Days to Save the United Kingdom'.

Fraser Nelson and the Spectator urging us to save the union with a rush of persuasive letters to misguided Yes voters.

Alan Cochrane of the Telegraph ordering everyone to pass around felt tip pens and make improvised No window posters: 'Now's the time to stand up and be counted'.

Hughie Green with the original Stand Up and be Counted. (Okay, Hughie's gone now, but I'm sure he'd be readily invoking his 1977 classic in these darkest days for the union.)

Tim Stanley at the Telegraph proclaiming that same emotional nationalism: 'To save the Union, we have to say it out loud: Britain is the greatest country in the world'.

Will Hutton declaring Scottish independence as, no less: 'the death of the liberal enlightenment before the atavistic forces of nationalism and ethnicity'.

And, of course, with perfect timing, The Pregnancy (as presciently suggested by our 'Yes seer' at Bella Caledonia).

We even had the Guardian ask: 'Will the new royal baby save the Union?'

Perhaps not, but maybe Gordon Brown can. The man who wrote the cheques to 'save' (read, slaughter) Iraq has now been 'recalled' to save the UK with his 'promise' of 'new powers' - forget the purdah, the media have - if we all just cut the Braveheart stuff, vote No and put our trust in those benign ConDemLab saviours.

Just think, we really can now have The Best of Both Worlds. With all those dreamy prizes on offer, why would we even think about having real, confirmed powers in nine days time?

Maybe because of interventions from leftists like Owen Jones who, while berating the establishment as solely responsible for this state of affairs, declares his faith in 'federalism' and the fascinating idea that neoliberal New Labour can still be transformed into something radical.

Jones often claims that he's 'not here to tell Scotland how to vote'. But this kind of opinion piece, pitched significantly at Labour supporters in Scotland, serves the same establishment-upholding purpose: to prop-up a collapsing UK state; and to foster the illusion of Labour as a party of left deliverance.

As Ian Bell notes at the Sunday Herald, this is the same Labour party under Miliband which voted for a Tory benefits cap that will see another 345,000 children thrown into poverty, and which slavishly follows the ConDem's relentless privatisation of the NHS:


Even if you can make the bet that Labour can fend off Ukip, prevail against voting habits in the English South, suppress its own worst instincts and see sense amid the austerity mania, you are left with a question: when did Miliband's party last deserve to be called progressive?

Nothing progressive can come from a party bent on such a course. Nothing that party offers, circumscribed by expediency and electoral calculation, matches the opportunity for Scotland of independence. You can have Miliband's remote hopes. Or you can rip it up and start again.

For George Galloway - alas, it's the same false faith choice of a Labourite rescue and that old clarion call to hold the union: 'Ten days left to save Britain and unity of people of this small island. Now is the time for men women [sic] who believe in that to step forward'.

It's not just the blatantly reductionist portrayal of an intoxicating Yes movement as 'nationalist', or the fallback to rogues like Brown and that old Labour clique, it's the poverty of the No left's political imagination, that toxic refusal to look beyond the SNP, or Salmond or the White Paper, to contemplate the creative potential of a new left-directed politics, for Scotland and the rest of the land.

As an antidote to all this atavistic Brittanica, referendum bribery and Labour apologetics, how energising it was to read Irvine Welsh's leftist essay on the real case for Yes, all wonderfully infused with a true appeal to Labour supporters.

Reflecting on the cringe of old patriotic infantilism and spurious 'nationalism', Welsh observes the pleasing advance of a new political and cultural maturity:


I’ve been greatly inspired by the post-devolution generation, and their pragmatic thinking on the issue of independence. I believe they have enabled an emotionally backward and immature country (as all countries, by definition must be, when they are governed from elsewhere) to grow up and move forward. It’s this generation who have given us phase three of the independence debate: beautiful, wonderful phase three, which says that it doesn’t matter who is to ‘blame’, the important thing is to fix it.

Welsh also mulls the Blairite project's annihilation of old Labour through the post-war period and the now lost gains of Bevanite social democracy:


All that has now gone, and the Labour Party will not be bringing it back. Tony Blair and Gordon Brown were no aberrations; they were the natural progression of a movement that has ‘evolved’ from its radical roots into a centre-right focus group-driven party of power. Now, on a policy level, they chase middle England votes, while lecturing working class people on their ‘duty to vote’ (Labour), in order to ‘keep the Tories out’.

He also puts paid to the old 'class abandonment' argument:


An anti-independence argument, repeated in the discussions with my old Labour-supporting pals, is one I’ve consistently heard down the years. It contends that we have to ‘stand alongside our comrades in England.’ I agree wholeheartedly, but fail to get how ‘standing alongside’ somebody involves trudging to the polling booth every five years and sheepishly sending down a cluster of political class lobby-fodder careerists to Westminster, who then continue to preside over the transfer of resources from the rest of us to the super rich.

I believe that our joint aim should be to make these islands the home of a batch of healthy, vibrant democracies, instead of a chess piece in the saddo G7/militaristic ‘sphere of influence’ games of the power brokers: those war-mongering (never war-fighting) cowards and their pathetic groupies in the privately owned media. Let this happen in Britain, in Europe, across the world. That’s internationalism, not preserving an elitist, reactionary, pomp-and-ceremony failed UK state, which has over the last thirty-five years systematically crushed every single gain that non-privileged people in this country have fought for.

If you're one of those conscientious Labour waverers, let that timely, inspiring piece, rather than Jones's false manifesto, seep into your progressive consciousness these last nine days.

Good piece. And since this happened https://twitter.com/EdwynCollins/status/507614239301726208, the title is appropriate. Despite the European elections and Tory victories, I think most on the Yes side know our southern friends are not as dumb as they make out. Hopefully this'll inspire them to see what's possible when they stop looking at themselves through the lens of the tabloids, and see that if there's something worth voting for, people will vote. https://www.youtube.com/watch?v=ESy-Z8vqMrE

Just ten angst-ridden days in which to rescue a failed state, a failed politics, a failed economics.

Not to mention, the plutocrats for whom all the above are working out just fine.
~

Not that I'm a Labour supporter, but I am undecided, having moved from a certain No to the uncertain middle after finally waking up to the chance of getting rid of Cameron and Co (warmongering, deceitful millionaires selling us out to the geopolitical aims of the USA).

However, I don't think Alex Salmond is any different, really. When Megrahi was released and in full knowledge of the Scottish Appeals Court ruling that the verdict against Megrahi was likely the worst miscarriage of justice in the history of the Scottish legal system, Salmond chose to score a few cheap political points and attacked Westminster for releasing a guilty man. He could have made a stand for what is right, but he didn't.

So how am I to truly believe that it will be any different in an independent Scotland? It'll just be business as usual, I'm afraid.

I am looking at the argument from all angles and still find myself firmly stuck in the middle. I will read Welsh's piece, but are there any more well-argued pieces? Oh and please don't point me to Craig Murray, I read his blog regularly and I respect and appreciate his views, but for once I find his opinion of no voters incredibly offensive.

Thanks for your comments, Charlie.

I won't delve too deeply into the Megrahi affair, except to say that I agree, he was almost certainly innocent.

Try to look beyond Salmond, the SNP or any other party politics. This is a referendum about independence, the possibility of attaining real democratic powers, and allowing us to vote for whoever we want and feel it matters.

It allows us to pursue something radically different in economic and social justice terms. It also allows us to remove the obscenity of Trident, and to be a peace-seeking, rather than warmongering, country.

The real question is why wouldn't we want such powers?

All these things still have to be fought for, but independence places us in the correct strategic place to do so.

We have a truly wonderful, indeed envious, opportunity to build the new and better society.

I hope this helps you towards a Yes.

Thanks for your thoughts, Jimbo and ifthethunderdogdontgetya

Thanks for the links, John. I'm still swinging wildly from yes to know, but until Thursday I'll be reading as much as I can.