Highest commendations today to the White Feather activists who carried out this brave and imaginative protest against militarism and war propaganda. 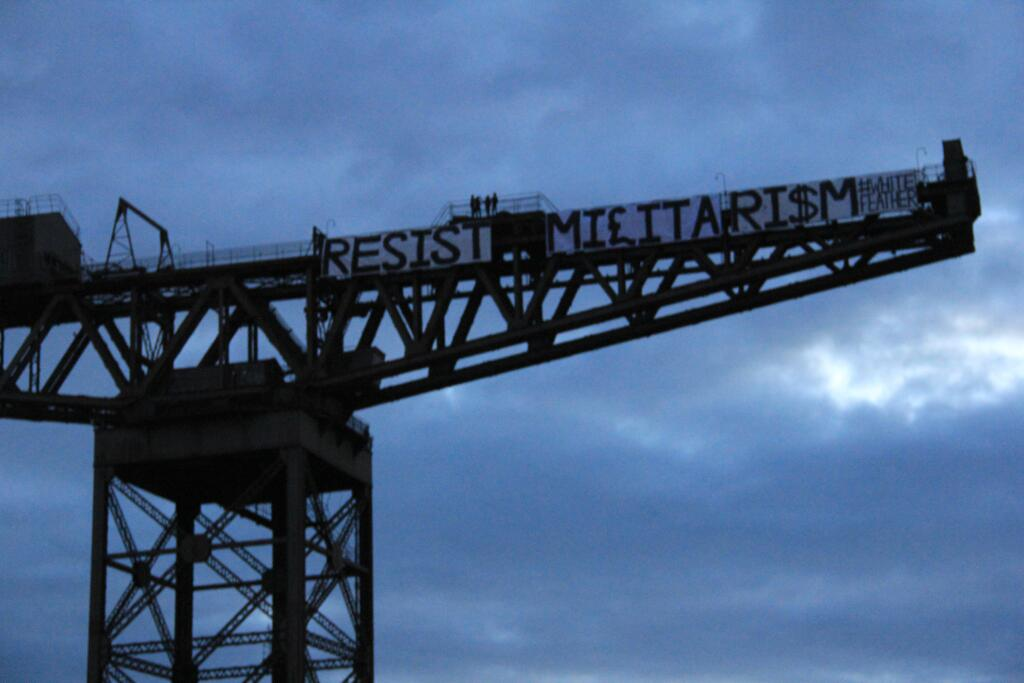 On a day dominated by news coverage of Armed Service events, this radical action serves as a valuable reminder of how routinely we're bombarded with messages of 'benign
militarism', all serving to disguise the vast crimes being committed by US-UK-Nato forces.

The huge banner draped by the four courageous activists over the iconic Finnieston Crane on Glasgow's river Clyde faced, appropriately, the main media offices of STV and BBC Scotland, the latter, predictably, choosing to omit any mention of the action. 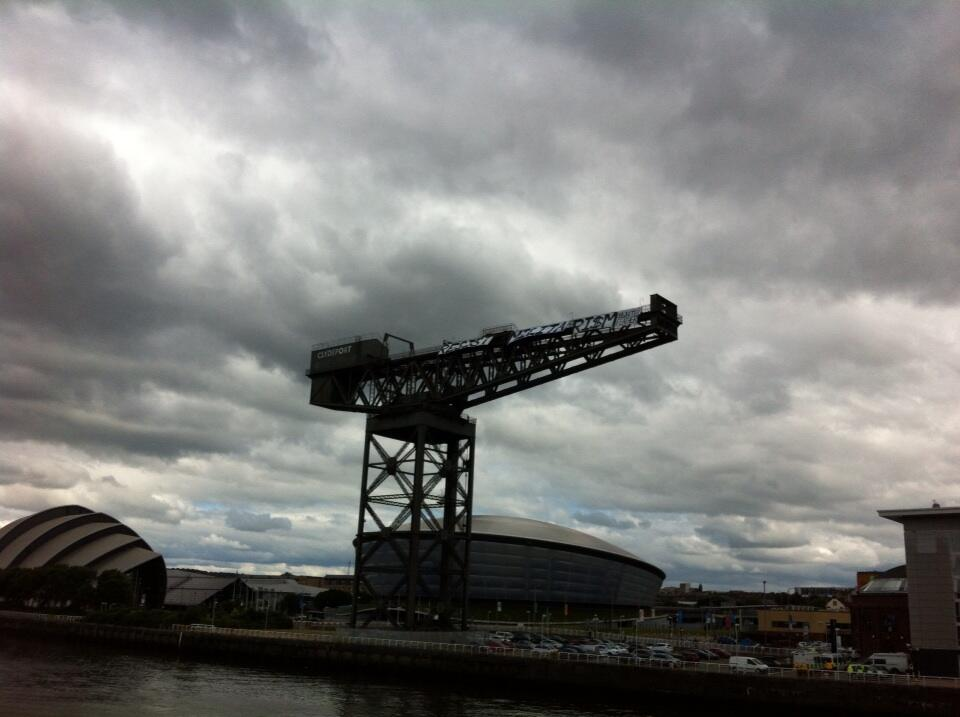 The protest was, however, reported by STV:


Speaking from the top of the crane protestor Frida Grey said: "When children in Scotland go to see tanks and bombs today in Stirling that's part of the normalisation of military culture. "We've been engaging with police all morning and explained we want to stay here for Armed Forces Day. This is a peaceful protest about getting a message out. "I would encourage people to think more carefully about celebrating military culture. "There is sacrifice and commitment from people in the Forces, but we have to work towards a demilitarised future."

Arrested on breach of the peace charges, these four admirable women have shown, by the tallest moral example, that there are true, humanitarian alternatives to war, spurious 'intervention', corporate-serving weaponry and the insidious culture of militarism that urges us to celebrate it all. 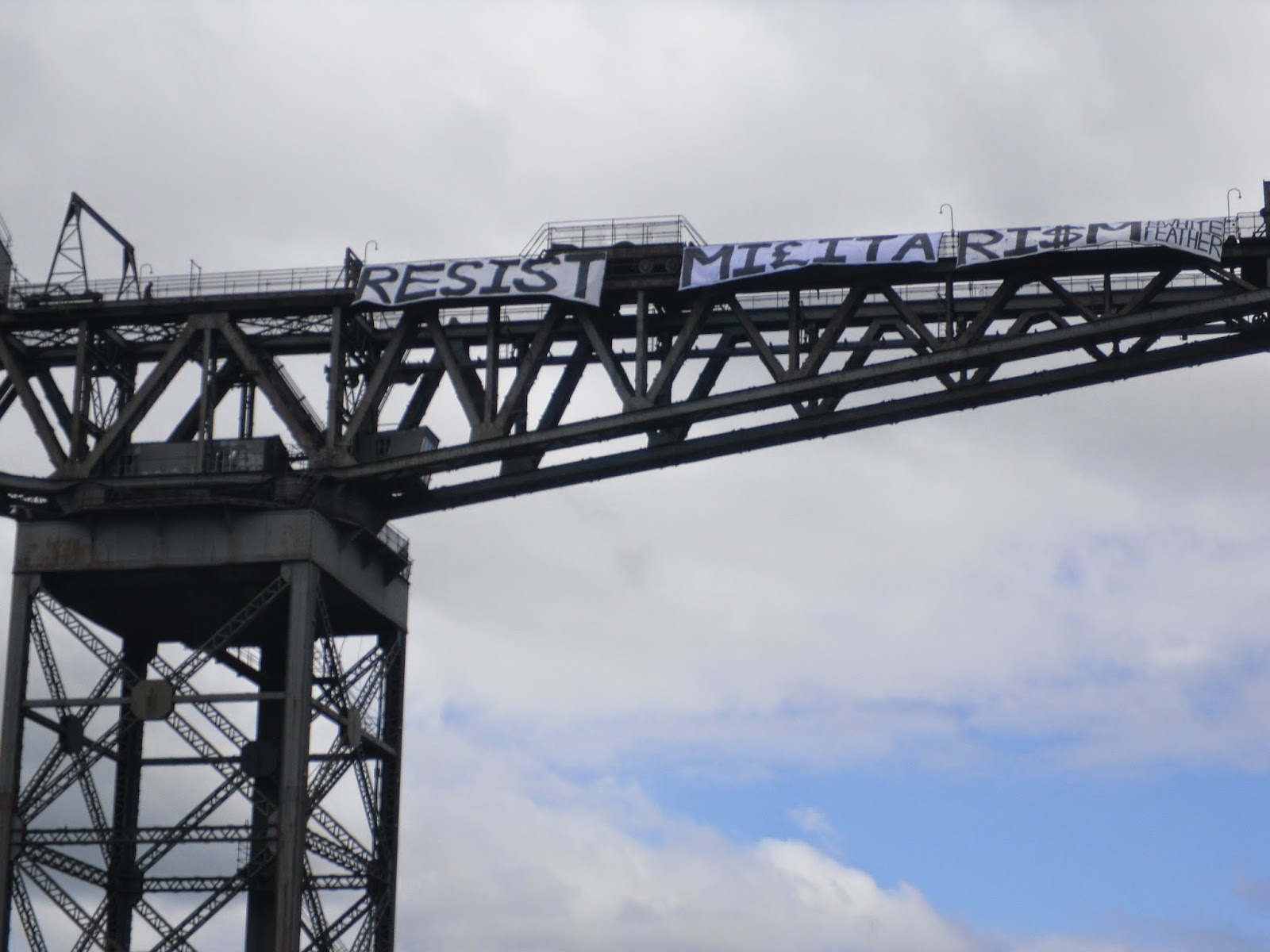 Follow police and court proceedings against the 'Finnieston Four' via White Feather WW1.

'The white feather  - a symbol of cowardice given to men who did not enlist in WW1. We reclaim it as a symbol of defiance and solidarity.'

After lengthy delays, 'lost paperwork' and legal arguments, all four appeared before the judge, pled not guilty and were granted bail.

The Crown had tried to insist on a set of 'special conditions' preventing the accused from entering what they called the Commonwealth Games 'event zone'.

Asked by the judge to specify what was meant by an 'event zone', the fiscal listed over a dozen extensive areas of the city, including the entire Marathon route, around which the women would not be allowed to enter. It also included the Queen's Baton route.

The fiscal accepted the judge's point that this could effectively mean the accused being unable to leave their homes to go to their places of work, study and other locations.

The defence lawyer argued that such restrictions were both disproportionate and logistically unenforceable. He also noted that this had been a specifically anti-war protest, with no particular bearing on the Games. 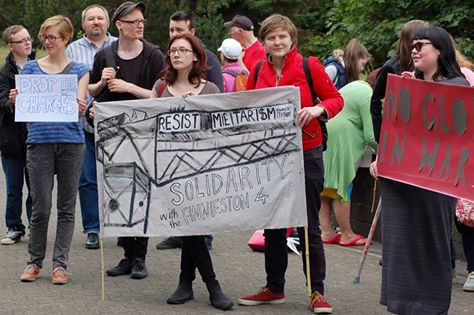 The judge, sensibly, agreed, also wondering why the Crown had brought the case before this lower district court while seeking such a severe prohibition.

All four were released on standard bail conditions, the only proviso being that they stay 50 metres away from the Finnieston Crane.

Trial dates were set, and the 20 or so supporters in the gallery broke into applause.

There was also a good gathering of supporters with placards outside the court before the hearing, breaking into the improptu chant: 'no weapons, no war, free the Finnie Four'.
Posted by John Hilley at 21:07