Awkward questions are now being asked of the MoD, Rangers FC, the police and a virtually silent Scottish media after an armed forces parade at Ibrox degenerated into a military-sectarian singalong.

Much of the public will be both embarrassed and sickened by the spectacle. Many, of course, will be unsurprised at seeing some of 'HM's finest' revelling in their true colours.

How they 'bounced' together 'for club and country' - with even a senior uniformed figure zealously waving a red-hand of Ulster flag from the touchline - as troops and fans belted-out 'No Surrender' and other 'party tunes':

Victims' families in the North of Ireland will have little difficulty recalling the dark politics of military-paramilitary collusion behind that little ditty.

Little will such events do to help diminish long-standing hatreds. But at least it gets an ugly reality into the open.

It also undermines the oft-made claim that such parades aren't political in essence. And in this case, as understood even by an ex-serviceman, there's a darker political-ideological agenda afoot. 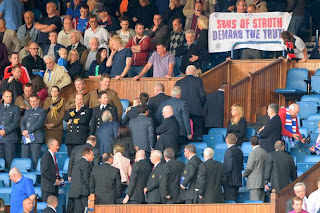 The real culprits here are not the sadly-conditioned fans and soldiers, but the military brass who, grandstanding with Rangers' smart-suited directors, surely understand not only the jingoistic potency of parading troops, but their provocative presence at this still deepest of sectarian clubs.

'Win-win', they must have thought in mixing this 'our brave boys' march-on with keeping the 'faithful' nicely diverted from the club's deepening in-house crisis. A motley amalgam, indeed.

If only those 'Rule Britannia, no surrendering' fans really knew how much they were being manipulated by such tawdry stagecraft.

Nor, in this exploitative context, should we dismiss the significance of such naked displays of Unionism in approaching the independence referendum.

How seamlessly the legitimising of imperialist wars and militarist propaganda is being used as a prop for Unionist continuity.

Yet, even here, mainstream Better Together campaigners must be troubled by such Unionist 'associations'. Is this a healthy 'promotion' of their 'best-of-both-worlds' urgings, or any inviting message for a still mass of undecided voters?

On which note, a seemingly uneasy silence from much of the Scottish media. I suspect the standardised, cursory reportage of 'an incident now under investigation by the police and army' reflects both an editorial reticence to engage a subject that not only still scars our society, but carries sensitive ramifications for the 2014 poll.


"We’ll wait and see the response from the media, politicians and sporting authorities in the coming days. The response will answer the question ‘what kind of a country are we living in?’ and a subsequent question, what sort of Scotland do we aspire to?"

One can only trust that such events help stir the electorate towards a more enlightened vision of political-cultural modernity, something more inclusive and humanitarian, hastening the true detachment now from an anachronistic British state, with all its imperialist gloating and militarist pandering to sectarian division.
Posted by John Hilley at 15:07

Nor, in this exploitative context, should we dismiss the significance of such naked displays of Unionism in approaching the independence referendum.

theres the thing in a nutshell which I havent seen stated on any of the other articles I have read on this fiasco.

"Rangers" are the primary Unionism Delivery System for the uneducated mass of working class Scotland.

Thanks, kay. I wouldn't want to overstate its primacy, as such. The appeal to raw Unionism has certainly been long-filtered via this institution, but it also comes through other forms of cultural conditioning, like schooling and media.

It's also a complex picture across much of working-class - and wider - Scottish society, with many of the old 'religious-political' affiliations now broken down and giving way to new identifications.

Still, these kind of events are a sobering reminder of a still-apparent, and troubling, expression/manipulation of sectarian politics.