"You proud house town mouse, ha ha charade you are.
You're trying to keep our feelings off the street..."

As the £15 million George Square 'revamp' moves from fiasco abandonment to open recrimination, it's worth pondering just what essential issues have been ignored or circumvented in Glasgow City Council's invitation of the design proposals.

There must be a proper assessment of sustainable traffic arrangements.
It's remarkable that barely a city council memo or media report has been afforded to what should be the primary issue of environmental sustainability.

It's notable also that none of the design submissions made any firm proposal for traffic removal or prioritised such crucial environmental factors.

It is entirely feasible to either pedestrianise George Square's surrounding streets or, like the nearby Merchant City, curtail their use as traffic thoroughfares. Creating an extended concourse/piazza would demonstrate a serious commitment to discouraging city centre car use and reducing carbon emissions.

It would also provide greater pedestrian connectivity from all sides of the Square. Presently, the Square is an underused and still oddly detached public space.

Altogether, an extended pedestrian square would foster much-improved air quality and create a noise-reduced area in which people could relax and move around without the feeling of being in the middle of a bustling, polluted traffic island.

George Square should remain a public space, not an events-driven one.
And that includes the right to free assembly, demonstrations, protests and any other such activity integral to citizen democracy.

The council's plans to further commercialise the Square has, unsurprisingly, seen efforts to serve notice on such activity, negating an entire social and radical history of mass gatherings, from the First World War rent strikes to the anti-poll tax and anti-war rallies.

It's always useful to 'follow the money' in seeking to understand such motives. The Labour Council Leader Gordon Matheson appears to favour a plan that links the Square's overhaul with an extended commercial plan for Buchanan Galleries and Queen Street.  As noted at the Guardian:


"Rather than a place for contemplation, assembly and meetings, the square was to become a far more commercial space, for events and money-spending; the square would effectively have become part of the so-called Buchanan Quarter redevelopment to its north. Demonstrations on the square were to be banned outright. A preview of the likely effect has been present for a while – for the last few years the council has been letting the square out for Christmas events and the like, making it feel like the concourse of a shopping mall rather than a public open space."

The warning is reinforced by campaign grouping Restore George Square:


"The continued emphasis on events (and the tents, portaloos and crush barriers that go with them) and the same funding source suggests the plan is generally the same: improve the events infrastructure of the square with a view to herding as many people as possible into the square in the hope they empty their pockets, particularly in Land Securities’, Buchanan Quarter, who are providing much of the cash for the development."

The Restore site also outlines some of the cosy interconnections amongst the business lobby pushing for an increased events agenda on George Square, including figures from the George Square Project Board and Glasgow City Marketing Bureau.

While nominally attractive, the 'winning' design by John McAslan (even with its extended revisions, left) still only envisages a sparsely green space which, one suspects, will allow for an events-driven concourse easily adapted to the staged commercialism favoured by the council.

Since the curtailment of his plan, McAslan and his team have made notable efforts to engage both the public and Matheson's council. He has also spoken encouragingly of incorporating new forms of sculptured design while retaining the generally favoured feel of the Square.

However, it remains to be seen what further consideration the McAslan plan would give to any more park-like and traffic-free space - and, of course, whether any of his proposals will ever be approved by Matheson.

Due time and consideration should be given to public views and wishes for the Square.
It's rather obvious now that Matheson's singular dismissal of the favoured bid and authoritarian handling of this issue demonstrates a flagrant disregard for due process or the actual feelings of Glasgow's citizens.

Matheson is keen to promote his own vanity project in time for the forthcoming Commonwealth Games, one which, he probably prides, will be his 'political legacy'.

Such is the edict-passing style of Glasgow council leaders, notably New Labour's Frank McAveety who, in 1998, with barely even a nod to public opposition, ordered the bulldozing of 75-year-old trees and the green lawns to make way for the infamous red tarmac and more staged events.

Likewise, the so-called 'qualitative research' exercise carried out by the current council in fact 'consulted' all of 42 people, arriving at the unsurprising 'conclusion' that: “They wanted a square that … had more staged events.”

The Square and what eventually goes there will have to please and facilitate Glasgow and visiting people long after the games. Any refurbishment, 'grand design' or basic 'facelift', should be allowed ample time for consideration and completion rather than rushed through as some kind of flash presentation.

Alongside proper consultation and free assembly, people also have aesthetic rights. The appropriate way to resolve the issue is to have a fuller set of options and discussion of the details followed by a local referendum.

Should the statues stay, go, be replaced?
It's impossible to please everyone in such cultural or political regards.  But it's apparent from the gathering online campaigns that, with the desire for replanting trees and green lawns, most people want some kind of return to the old George Square, statues and all.

That fits with a seemingly common wish to regain or preserve things that were/are solidly familiar, an instinctive wariness - following years of closing cherished buildings and other public places (like Paddy's Market, shut down by Matheson) - of the council's 'modernist' ignorance and ineptitude:


"There is a feeling that the council’s ­vision of Glasgow as a shiny shopper’s paradise will eventually engulf entirely the older, rougher, more characterful city; a triumph of the bland."

However, it may be suggested that, while recognising the broad desire to retain a traditional Victorian square, there may still be careful room for removing, relocating or replacing statues that are not just ugly and monolithic to many an eye but redolent of a past imperialist age.

Would most Glaswegians really resist de-plinthing, for example, Field Marshall Lord Clyde (whose colonial exploits included quelling the 1823 slave rebellion in Demerara and putting down the Indian Rebellion of 1857) or Lieutenant-General Sir John Moore (whose military cv involved the crushing of Irish rebels, circa 1798)?

And if we are to cherish historical heroes and events, why not honour those like Glasgow anti-war radical John Maclean and commemorate the George Square riots which saw government tanks on that now red tarmac?

From the Merchant City's dark founding on overseas slavery to George Square's own Hanoverian and Victorian iconography, it's sobering to think that Glasgow has precious little in the way of truly humanist and revolutionary remembrance.

Of course, there are those supposed purists like Sandy Stoddart ("Sculptor in Ordinary to Her Majesty The Queen in Scotland DL RSA (London) RSE") who would little countenance any such radical imagery while zealously defending assorted statuary of the Empire.

Here's Stoddart on the above-noted exhibits and what he thinks of their critics:


"There is also one who fought in the Crimea and in India (Colin Campbell, Lord Clyde) and although his presence often most excites those with a pathological desire to make George Square statue-free, owing to his easy castigation as a soldier in service of the Empire, nevertheless he is certainly more of a man than any, or all of those put together, who would seek the erasure of the statuary on his account." 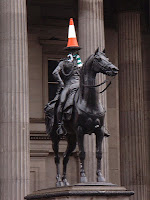 And Stoddart again on his own lofty architectural pedestal dismissing the 'philistines' of Glasgow for 'desecrating' the nearby Duke of Wellington:

"Marochetti’s statue of the Duke of Wellington is the one the abuse of which Glasgow has taken to its heart like a class delinquent (I mean the infernal traffic-cone at which our foreign visitors are aghast and about which we as hosts are perfectly mortified; what does the treatment of this statue indicate about Glasgow and its “authorities” in general?)" [My emphasis.]

Whatever it may suggest of the city's people - rather than its authorities - one hopes that it reflects the humanitarian heart of Glasgow life and a democratic appreciation of culture rather than the boorish snobbery of Stoddart, who goes on to damn, in more melodramatic tones, its 'barbarous iconoclasts':


"Be certain, then, that the Taliban in Afghanistan target the rock-cut Buddhas of Bamiyan with exactly the same sense of resentment against their perpetual peace, as certain thrusters in Glasgow seek to expel the statues from George Square. There is a deep-seated, natural-barbarian instinct to topple, oust or deface the graven image, as fundamental to Nature’s plan as the cycle of rebirth itself."

So, anyone with the temerity to remove or replace a statue is to be equated with religious fanatics.

Such opinion, 'expert' as it may claim to be in the history of sculpture and, yes, helpfully defiant of the council's own commercial-led vandalism, nonetheless reveals itself as brutally fundamentalist in permitting no room for alternative sculptural innovation.

And while risking such opprobrium, why not open a proper citizen's dialogue on what might more appropriately replace the cenotaph structure - one that's more inclusively humanitarian in style and message rather than the present edifice which, like the villainous Field Marshall Earl Haig who unveiled it in 1924, seems only to lionise war and the tragically fallen?

While there may be little likelihood of any change to this section of the Square, it shouldn't preclude open discussion of it.

In that explorative spirit, there may be scope for introducing and blending other more imaginative statue and art forms across the Square which are representative of Glasgow, past and present.

Again, these are matters always subjective, the outcome of which, perhaps with a fair input from sympathetic artistic and architectural bodies, should be determined through a full consultation process and referendum.

Whatever eventually appears, the most vital task is to re-create George Square as an inviting, environmentally-friendly, people-centred, green-pleasing space rather than the creepingly privatised, money-driven blandscape controlled by ego-driven councillors and their commercial coterie.
Posted by John Hilley at 08:37