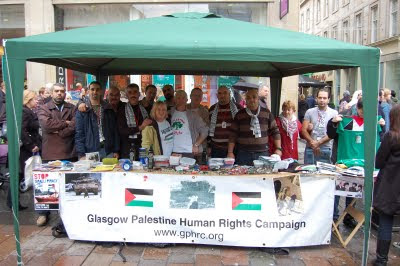 Glasgow Palestine Human Rights Campaign were delighted by the visit last Saturday of eight firefighters from Nablus, accompanied by Scottish Fire Brigades Union organiser Ken Ross. The group are here on a month-long training exercise initiated by Ken and the FBU.

Ken was part of the STUC delegation which visited Nablus and other West Bank locations recently to document (view youtube film) the plight of Palestinians and compile a report on the case for Boycott, Divestment and Sanctions (BDS) against Israel. The subsequent motion to the STUC conference arising from the report was carried overwhelmingly.

It was particularly uplifting to have the Palestinian firefighters -none of whom have ever been out of their occupied land before - stand with us for pictures and exchanges on life in Nablus. GPHRC retain a special fondness for the city, particularly Balata refugee camp.

The assistance and hospitality of the FBU and other organising bodies helps illustrate the growing solidarity felt for the Palestinian people across Scottish civil society.

Likewise, visits by trade unions and other civil groups to the West Bank and Gaza are helping to illuminate the brutal and humiliating conditions of Palestinian life.

As one FBU member recalled following another recent visit:

"Israeli settlements, checkpoints, road closures, land seizures, military exclusion zones and unequal access to water. I instantly understood that the rest of the world is not being told about what is happening in Palestine.

"The wall and checkpoints impact on every aspect of daily life, turning the West Bank into one huge prison with people penned in like cattle, having to form queues in order to do routine chores such as shopping, working or even going for medical treatment.

"We saw the refugee camps in Bethlehem and Nablus, where thousands of families are packed together in conditions totally unsuited for human occupation. As a firefighter I could only imagine the horror of a property fire in these conditions. As a firefighter I also watched aghast as a fire engine, responding to an emergency call, was stopped and delayed at one of the checkpoints. Firefighters we met in Nablus told me this is not uncommon, nor is it uncommon for one of these vehicles to be detained for up to an hour. Pumps – and firefighters – also received bullet holes when providing emergency deliveries of water to hospitals.

"I carry these images with me, and everyone I meet will be told about them otherwise the Palestinians’ story and struggle for everyday existence and dignity will remain hidden and forgotten.

The FBU's excellent film of this visit offers more graphic testimony of the occupation and pressing need for training and support for Palestinian firefighters.