With all your power: Faslane 365 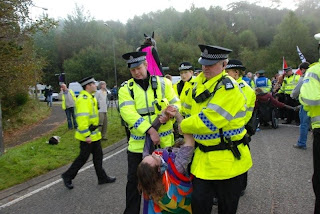 Isn't it funny how we associate particular tunes with significant events?

We're at Faslane North gate, early morning, gathered together in a spirit of solidarity and carnivalesque resolve. And the tune going through my head is The Yeah Yeah Yeah Song by the Flaming Lips, with it's whimsical verses and challenging refrain:

"With all your power, what would you do?"

And I'm thinking how apt that little lyrical question is on this uplifting day, both as an interrogation of the political elite with their fingers on the nuclear button and as an active demonstration of our own inner and collective capacities for resisting their policies of mass destruction.

Consider, in the first regard, the staggering scale of this deathly enterprise and what actually lurks behind those fortified gates.

Each of the 200 nuclear warheads, carried on four submarines, carries 8 times the explosive power of the Hiroshima bomb.

Trident's replacement will cost £76 billion (including 30 year running costs). Just think, to state the obvious, what kind of social benefits that colossal sum could deliver.

The International Court of Justice has ruled (1996) that "the threat or use of nuclear weapons would be generally contrary to the rules of international law applicable in armed conflict and in particular the principles and rules of humanitarian law." The replacing of Trident is, in effect, illegal rearmament.
www.cnduk.org/pages/binfo/ntr07.pdf 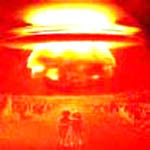 In breaching the Nuclear Non-Proliferation Treaty, the UK, along with America and Israel, is serving to encourage a new arms race in the Middle East. This is the dual economics of geopolitical control and corporate militarism. From Faslane to Dimona, it's the same concocted story of "necessary deterrence" and privatised warmongering.

Trident has also locked Britain into America's military agenda of global dominance and 'pre-emption', thus encouraging nuclear upgrading by other countries. But, in seeking to protect its place within the nuclear club, and in its role as a leading global arms trader, the UK is itself a willing and mendacious party to this destabilisation.

As Greenpeace note: "The disposition of the US and UK Trident fleets, and the extraordinary range of the Trident D5 missile, mean that every day the USA and the UK project massive nuclear force into the Middle East – providing states such as Iran with an argument for acquiring their own nuclear weapons."

Again, the question is posed: with all those powers, what might they do? Annihilate countries like Iran for daring to think about protecting themselves in similar ways?

But, then we have the other facet of our lyric:

With all your power, what would you do?

And this opens up another line of uplifting thought on our own powers of human persuasion. 1149 people have been arrested during the 365 campaign, 180 on the Big Blockade day alone (including, in humble spirit, yours truly). 131 groups have blockaded throughout the campaign, covering 188 days of protest. From all walks of life, people have come to express their opposition to WMD. And that display of collective dedication has helped keep Trident firmly in the public domain as a political, financial and, of course, moral issue to be resolved. 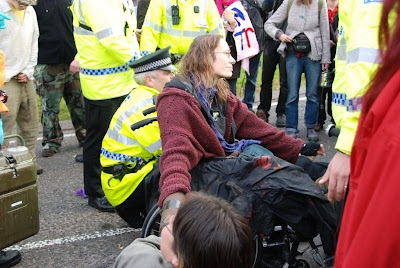 This combination of civil disobedience and vigilant action has helped delineate how the Scottish Government itself must now act to oppose and obstruct the UK's Trident replacement policy. While encouraging to hear First Minister Alex Salmond openly endorse Faslane 365 and the Big Blockade, even greater pressure must be applied to make Holyrood act decisively.

Meanwhile, we can take great heart from the display of collective power here. As the police busied themselves sawing through iron lock-ons and un-supergluing the hands of demonstrators, there's the reassuring thought that all their considerable powers will never match the simple ingenuity of those driven by such humanitarian ideals. 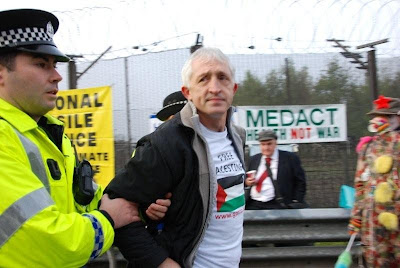 And, hopefully, this gives out a message of support and solidarity to others engaged in resisting state violence and oppression around the world. From the gates of Faslane to the checkpoints of Palestine, crass militarism will never outlive the desire for true peace and justice.

So, in tribute to all of those principled, resilient and peace-caring people, here's a little burst of The Yeah Yeah Yeah Song with pictures of this memorable day. (Many thanks to Alan Pacetta for the video.) Turn up loud, dance along and keep asking that vital question:

With all your power, what would you do? 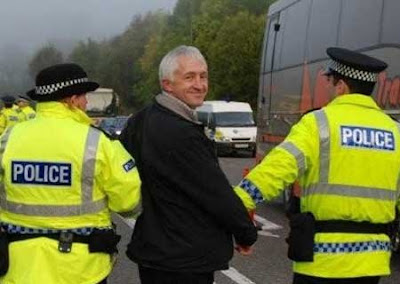