It's another grim reminder of the kind of 'justice' Palestinian children can expect from 'the world's most moral army'.

As Jonathan Cook blogs, the beating and unlawful incarceration of Tarek is consistent with the inhuman treatment experienced by the family of Tarek's murdered 16-year-old Palestinian cousin, Muhammad Abu Khdeir.

Autopsy results have confirmed that Muhammad was burned alive after being abducted in Jerusalem. Arrests have now been made, though Palestinians have little faith that proper justice will ensue.

Tarek has also now been released. But, as reported by Rania Khalek for Electronic Intifada, Tarek's father and other family members have struggled to get US Consulate officials to press Israel on Tarek's behalf:


When asked if he expects any accountability or justice for the treatment of his son, Salahedeen said, “No way, this is Israel. There is no protection for Palestinians from the police or soldiers or army.”

No one cares. The media doesn't. Obviously, you’re [Yolande Knell of the BBC] talking to me, you’re part of the media, but there’s something crazy going on. But for the most part, no one talks about the Palestinian situation, the Palestinian case. It’s quieted, it’s shushed because most people support the Israeli government. No one cares if six people are missing, 10 people die, two kids are kidnapped, 10 women are killed. No one cares about Palestinians.

One wonders whether the BBC and other leading media would have even covered such Palestinian killings had three Israeli teenagers not been killed earlier. For, as with the treatment of Muhammad's cousin and other family, it seems there's a higher premium placed on Israeli deaths.
As suggested by a tortured article from the Guardian's Jonathan Freedland, it's also revealing how media comment and analysis is routinely framed as 'tit-for-tat' revenge, a 'cycle of vengeance', all feeding the convenient narrative of 'two sides' locked in an 'intractable conflict', rather than the true, but never properly contextualised, fact of an Occupier and an Occupied.
Here, in a deplorable statement, is what senior BBC correspondent Kevin Connolly has to say about the 'weighing' of such violence:

Palestinians have been killed in the Israeli security sweeps conducted across the West Bank, as the Israeli army searched for the three boys and for clues as to what happened to them, but I think Israelis would argue that the nature of this crime – these three boys were from a religious college on the West Bank – they were just hitchhiking home for the weekend — the nature of it, the brutal abduction, the murder, the fact that the families were left for two and a half weeks not knowing the fate of the boys — there was a special kind of chilling factor, a cold blooded calculation to that crime that slightly sets it aside from the other waves of violence that we report on across the Middle East. [Original emphasis.]

So what we have is a supposedly impartial BBC Middle East correspondent elevating three Israeli deaths above all others in the Middle East and justifying this elevation by claiming that the circumstances in which they were killed were uniquely awful.

While effectively relegating Palestinian lives to that of Israelis, Connolly has, likewise, nothing to say about the primary cause and context of the killings: the Occupation. Indeed, it's sobering to think that this vital word is almost entirely excluded from BBC and other media output. 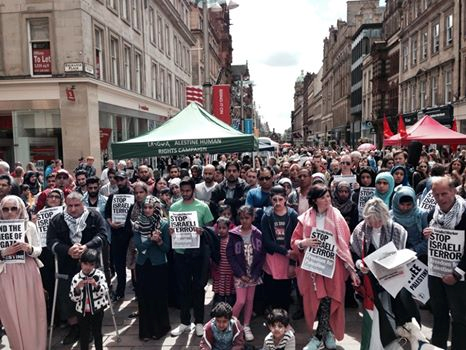 We are all human beings. We share the same hoped-for humanity, the ability to comprehend the pain families feel when their children are murdered, beaten and locked-up, and to recognise how children themselves are scarred and blighted by violence. But we also have a humanitarian duty to help identify the central cause of that violence: the historic crime of the Nakba and Israel's brutal removal of Palestinians from their land and homes. All present questions and possible resolutions must still return to the core illegality of the Occupation.
Complementing widespread protests, this was the scene yesterday in Glasgow's Buchanan Street as people gathered to denounce Israeli terror and the rampant media bias that prevents these essential truths from being properly aired.
Posted by John Hilley at 18:17