Glasgow turns out to support Gaza and shame BBC

Yesterday saw a tremendous display of humanity in Glasgow as people gathered to denounce Israel's wicked bombardment of Gaza and the media's disgraceful coverage of it.

While the people of Gaza are being bombed and murdered, the BBC in particular is not only failing to report Israel's actions as the high crimes of a rampant occupier, it won't cover mass protests over those crimes and the misreporting of them even at its own front door. 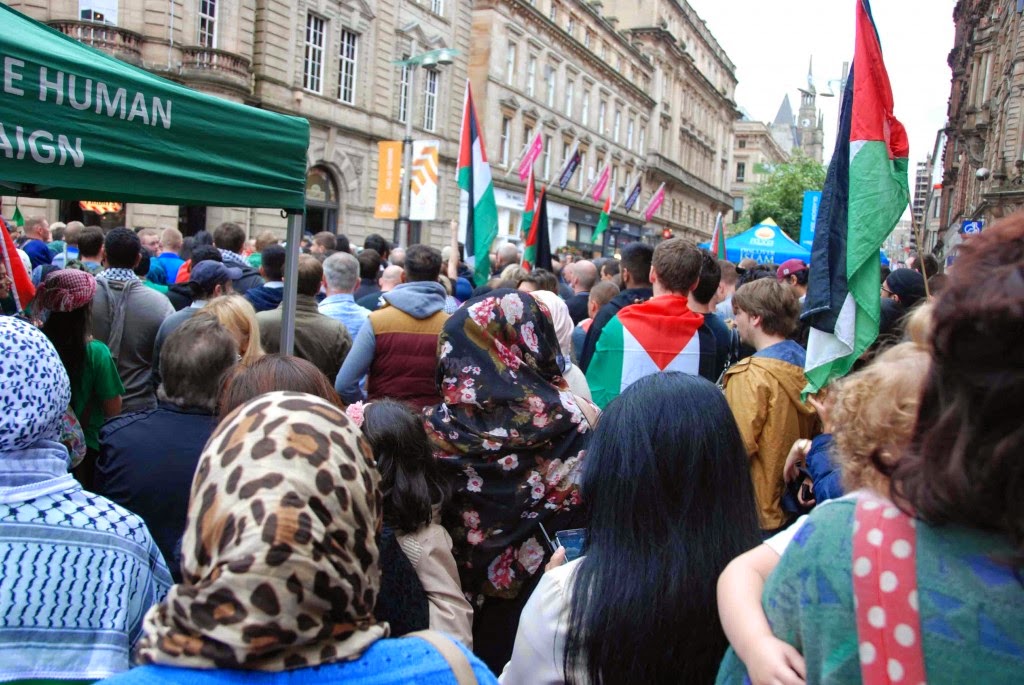 Condemning the appalling death toll, and expressing solidarity for the people of Gaza, many of those addressing the crowd highlighted the false 'Israel responds' narrative being repeated by state media. 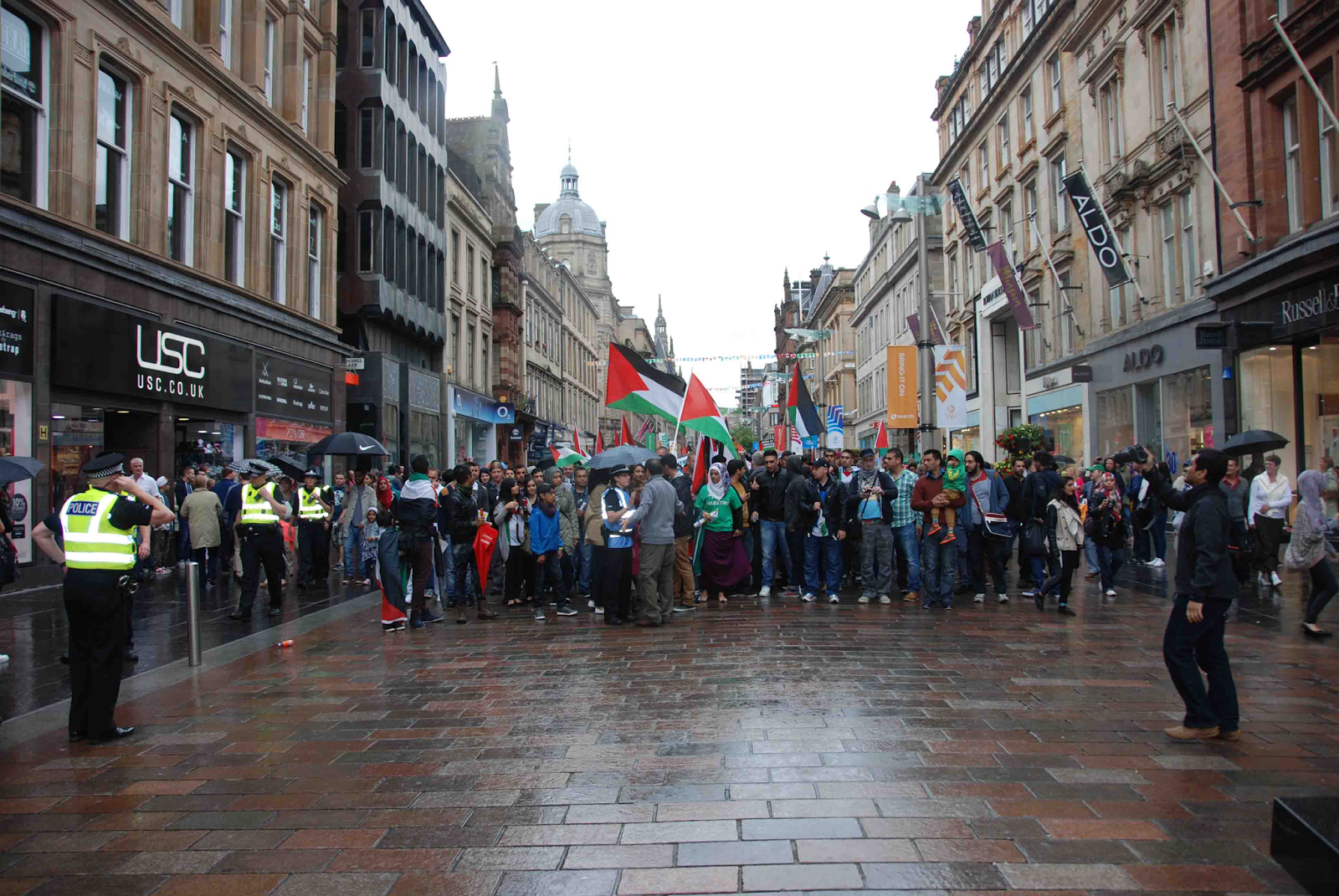 Key points were raised about what never gets reported: that Israel has Gaza's 1.7 million people under enduring military lockdown, that the context of the Occupation is never presented, and that, alongside its daily killing and repressions in the West Bank, Israel have consistently violated the 2012 Hamas-agreed ceasefire by murdering Gaza's farmers, fishermen and other civilians, most notably children.

How, others wondered, can the so-called 'international community' stand aside and allow Israel to engage in such a barbaric act of collective punishment - an act declared illegal by the UN. 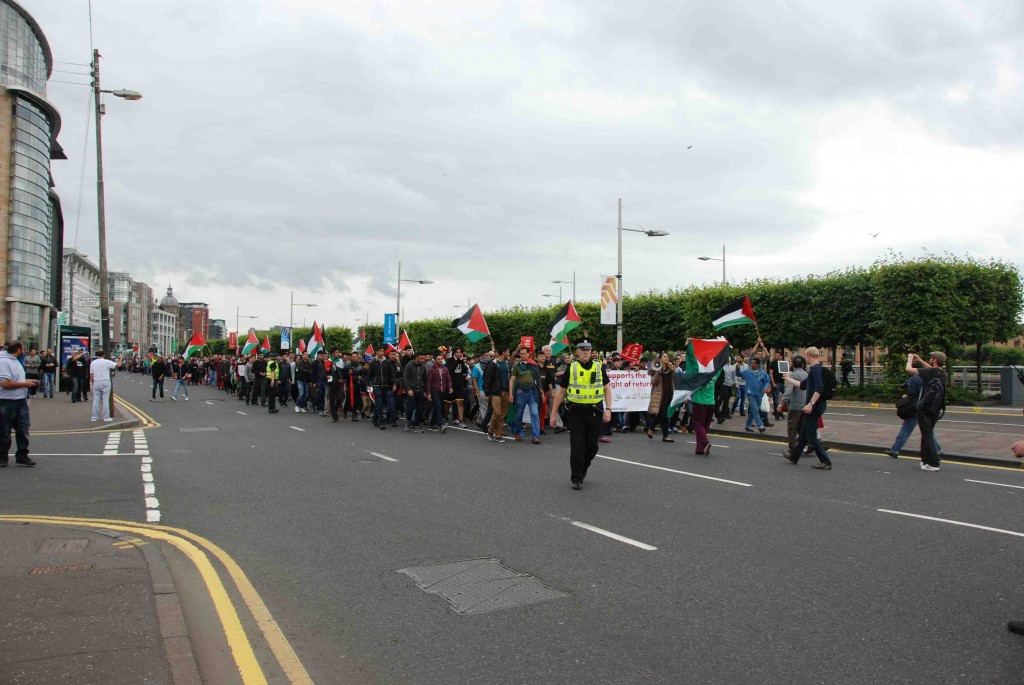 A Jews for Justice for Palestinians speaker also reiterated their admirable message that 'Israel does not speak in our name'.

And, in deliberating on what can be practically done for Palestinians, strong opinion was registered that an independent Scotland with control over foreign policy offers a much more promising means of support than a UK state which embraces Israel and its US military sponsors. 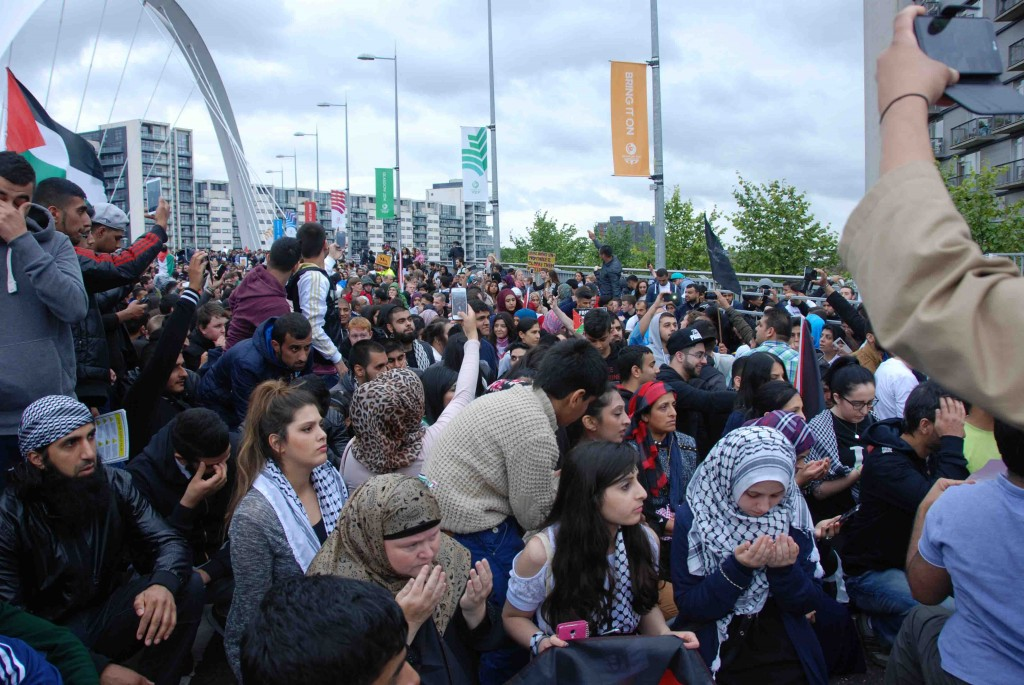 Afterwards, the entire crowd, in spontaneous mood, flowed down Buchanan Street for an inspiring march along the Clyde-side towards BBC Scotland HQ.

People from all walks joined in the swell of Palestinian colour, young and old, people of religions and none, families pushing babies in prams.

At one point the entire 'Squinty Bridge' and a long mass behind stopped, sat on the road and fell silent for Gaza. 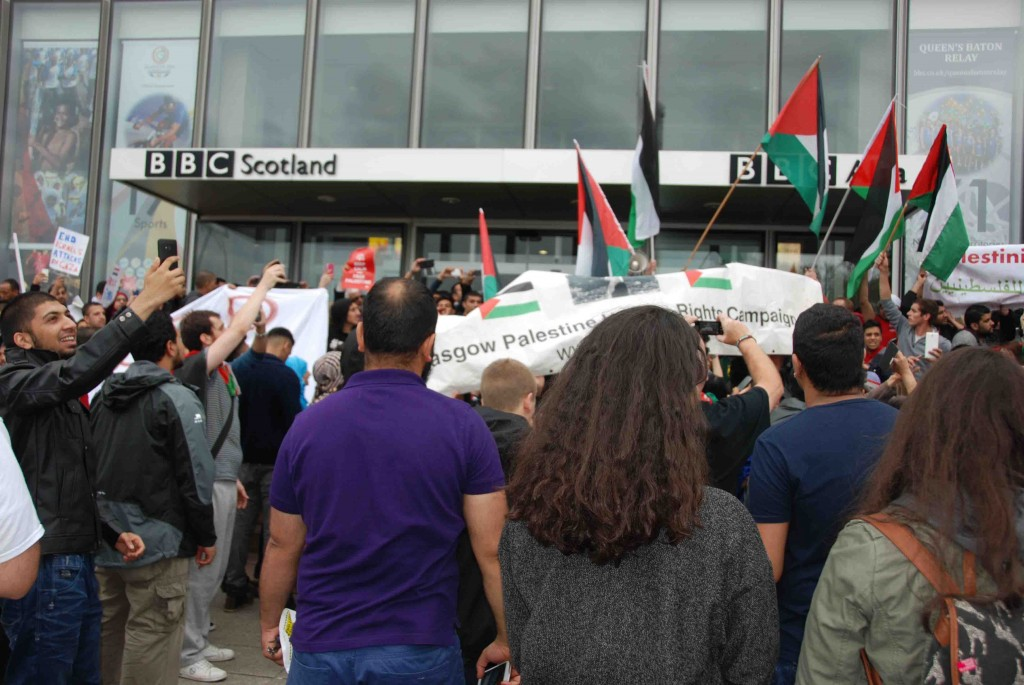 At their glass-fronted offices, people announced in voluminous voice: 'BBC - shame on you'.

And, shamefully indeed, not a word or picture of
this event has been offered by the BBC.

What kind of 'public broadcaster', with an 'impartial' remit to 'inform', can be so fearful of reporting such strong humanitarian feeling? 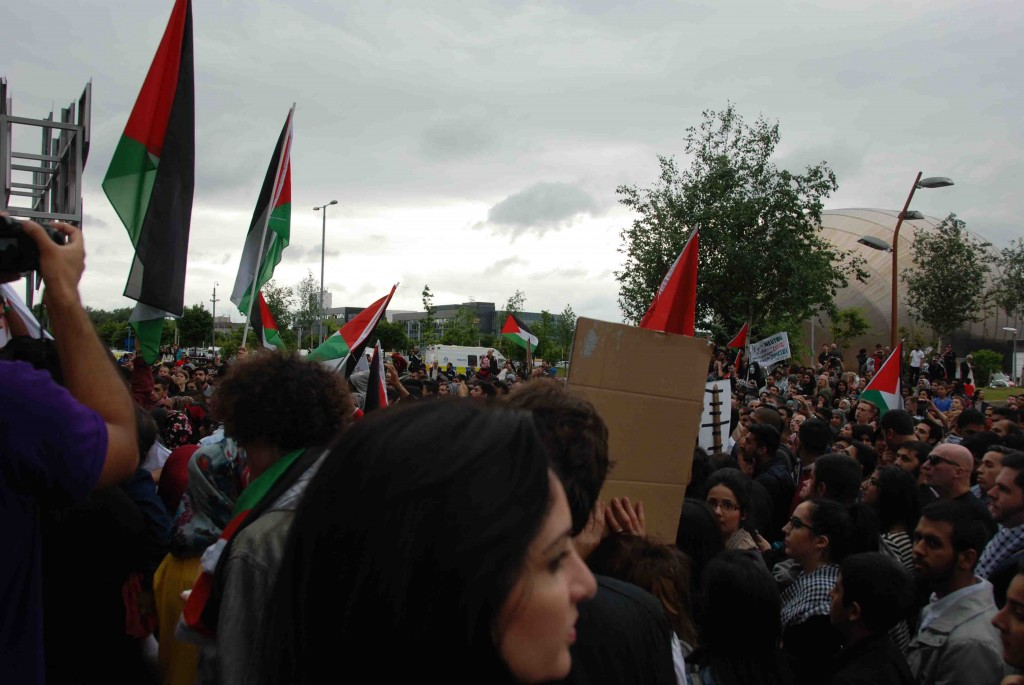 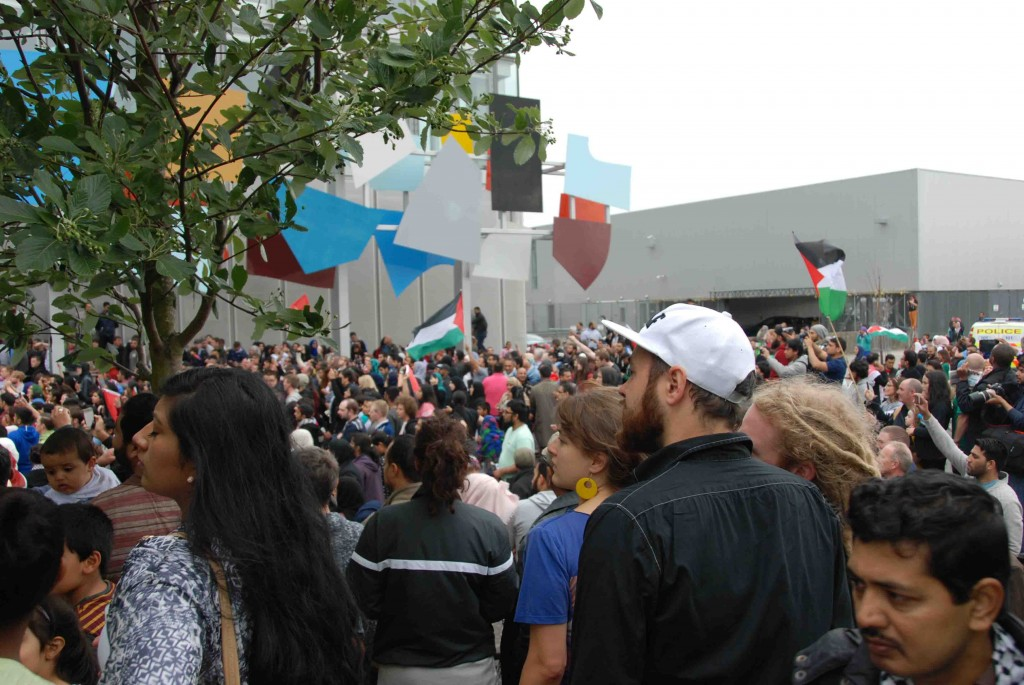 Despite such blatant censoring, people are turning to - as this superb gathering in Glasgow showed - a much more highly-effective social media to organise, communicate and disseminate information.

So, while the brutality of Israel's war crimes and other apartheid oppression continues unabated, one hopes that Palestinians can, like us, take great encouragement from the kind of resilient protest and activism going on here and in cities all around the world.

Muhammad Hamad, 75, lost his wife, three sons, daughter-in-law and grand-daughter when his house was wiped-out by an Israeli bomb. Here's his painful words:

"I went into shock. The neighbours held me because I couldn't stand. I felt I was going to faint from the horror of it."

What horrors our leaders are allowing to continue with their sanctimonious words about a 'peace process' and the need to ensure Israel's 'security'. And what consequential horrors are being hidden from public view by a shameless state media repeating those distortions on Palestinian 'militants', Israel's 'rocket-preventing mission' and the great fiction of the West's 'benign brokering'?

As Glasgow's and other outpourings for Gaza have shown, the capacity for rejecting such propaganda is growing, as is the heroic resistance of suffering Palestinians to their criminal occupiers.

*Thanks to John Pacetta of
Glasgow Palestine Human Rights Campaign
for the above images.

No report either John of the massive protest in Kensington High St outside the Israeli embassy on Friday afternoon.

As confirmed by this search result on their website!


'Sorry, there are no results for Israel london embassy protest 11 july 2014'

PS I am passing round the lists which you post on MLMB of those killed in Gaza.

I think more and more people in the U.S. are wondering why we give Israel $3 Billion a year for their atrocities and land grabs, but we're told we're told we can't afford Social Security, education, a public health insurance option, etc.

Yes, it looks like a blanket policy of saying little or nothing about these mass demos, a blatant evasion which only taints them more.

It's good that you're passing the names around.

Thanks too, ifthethunderdontgetya, hopefully more people in the US are starting to question the obscenity of America's dirty cheques to their co-criminals, while cuts and deprivation deepen.

Great Piece John, Thanks.. And well done the decent souls of Glasgow, and as Mary says, Kensington.

It's all just sickening... And have you seen this heart breaking clip -


While two killings — the sniper shootings of two Palestinian teenagers in May — are shown in the film, there is no fetishization of mangled bodies nor lingering gaze upon bodily trauma.

To me the film is all the more powerful for it is this distance between the fact of the missile strike and the expectation of death that creates a haunting sensibility of doom when framed with the audio of “maavet la’aravim.”

Yes, what a really powerful film from Benjamin Doherty.

There's something very haunting about the clinical, sharp whine of those rockets as they slam into homes, snuffing out life. And the wickedness is componded by those vigilante thugs seeking out Arab victims.