A new pro-Israel front group is seeking to exert its influence within the SNP.

SNP Friends of Peace in the Middle East claim to be promoting 'common dialogue' towards a 'two state solution'.

But behind the seemingly all-inclusive title and benign facade, it's really a Zionist advocacy group formed through Glasgow Friends of Israel and Sammy Stein, a leading figure within both bodies.

Contrary to their 'pro-peace' and 'pro-Palestinian' claims, each of these groups is dedicated to upholding Israel's occupation, colonial settlements and apartheid state.

The manoeuvring of those behind SNP Friends for Peace in the Middle East has been ably reported by Michael Gray at the social media news site Common Space. This includes leaked emails revealing support from the Israeli consular in Scotland, despite the group claiming to have no particular alignment with the state of Israel.

As detailed at Common Space, Stein, a former-serving soldier in the IDF, gained the backing of wealthy SNP associate Joe Goldblatt to help establish the organisation through a floor stall at the recent SNP conference. Behind the smooth promotion, it's a brand exercise in disguising Israel's crimes. A Jewish community leader has even denounced it as an 'Israel front group'.

With Israel coming under increased international pressure, this is part of the wider hasbara effort to contrive a new 'peace' image. But it requires little research or scrutiny to see the real reactionary nature of such groups.

Disappointingly, on the eve of the SNP conference, the party's Glasgow South MP Stewart McDonald wrote a comment piece at STV endorsing Stein's new group. (The STV site has been overseen by digital and comments editor Stephen Daisley, an ardent defender of Israel, who was recently 'reined-in' by the channel following concerns over his inappropriate use of the space.)

As reported at Common Space, McDonald's approval of the group has led to considerable critical reaction, both within and outwith the party.

The independent journalist Liam O'Hare has produced a searching critique of McDonald's claims to be a 'progressive, liberal moderate' serving the 'real' interests of Palestinians, reminding him that this group "is not pro-Palestine in any sense". Noting the "naivety displayed in McDonald’s article", O'Hare says of such groups' manipulative branding:


The creation of front groups is not a new tactic among those who seek to defend Israel’s actions. They represent an attempt to create an equilibrium in a conflict where none exists. I risk stating the obvious, but it’s important to remember that there is an occupier and an occupied. Israel is a nuclear-armed state, with the ninth strongest army in the world, and the blanket support of the world’s sole superpower. The Palestinians are a dispersed and dispossessed people largely abandoned by the international community.

At The National, Cat Boyd, offers further critical questioning of McDonald's "Palestinian rights activists have been unable to move with the times" line, and his chorus-joining 'concerns' over anti-Semitism on the "anti-imperialist" left. Boyd also challenges his invocation in the article of Winnie Ewing's past travels around Israel with Menachem Begin as some kind of 'inspiration to Scotland'. Where, we might ask, was his mention of Begin's own colonialist terror role, or his order to invade Lebanon in 1982, leading to the massacres in the Sabra and Shatila refugee camps?

Like many authentic SNP supporters of Palestinian rights, one can but speculate as to the reasons for McDonald's tortured endorsement of this organisation. But it's deeply perplexing that he should have failed to understand the group's real motivations, or, having been duly informed of its true agenda, still not renounced it.

McDonald has since declared his enduring commitment to the Palestinian cause. But many will question the kind of 'solidarity' that still approves and engages such zealous pro-Israel voices.

With Gaza under relentless, merciless siege, and the murderous occupation intensifying daily, it's never been more important to stand up unequivocally for Palestinian justice by helping to expose, rather than indulge, this kind of Brand Israel duplicity.

As Desmond Tutu reminds us: "If you are neutral in situations of injustice, you have chosen the side of the oppressor."

For the purposes of confirmation, here's the short leaflet produced and distributed by Glasgow Palestine Human Rights Campaign denoting the true agenda behind Glasgow Friends of Israel and their associate Friends groups. The very same deceit applies to SNP Friends of Peace in the Middle East.


STREET DECEIT
Friends of Israel are NOT 'pro-Palestinian' 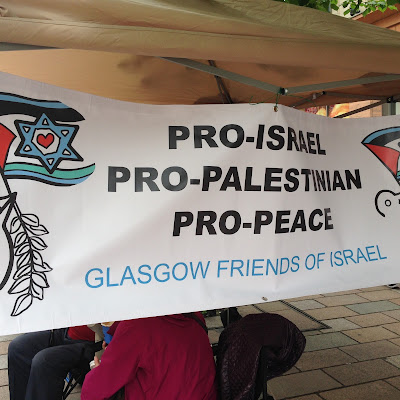 Friends of Israel are committed ONLY to Israel

Friends of Israel's MULTIPLE EVASIONS over Palestinian rights, and cynical claim to be 'pro-Palestinian', are intended to deflect public attention from Israel's colonisation of Palestinian land, war crimes and apartheid violations. DON'T BE MISLED BY THEIR STREET DECEIT.

Excellent piece and hits the nail on the head regarding this repugnant and sneaky bunch. I had Stein tell me through gritted teeth once, that "Palestine never has and never will exist". They are certainly no friends of peace in the Middle East let alone anywhere else

A "two state solution" is openly racist - it ostensibly means to promote perpetuation of ethnic-cleansing and continued Jewish supremacy in most of Palestine - quite bad enough, but that's not all. It's set up to fail, since the Zionists certainly know that racism is not a solution for peace - even if most of their adversaries fail to understand that.

The real point of a "two state solution" is to steer attention away from what is OBVIOUSLY the only real solution: STOP ALL THE RACISM NOW. Nothing less than that would be tolerated in any other case of openly-declared racist violence - and racist violence cannot be more openly-declared than the ongoing ethnic-cleansing of Palestine in broad daylight - or forcing a Jewish state into indigenous Palestine.

Talk about a two state solution, in one form or another has been the primary backdrop for constant Zionist expansion, ever since the "Partition Plan" was presented to the UN in the late 1940s. That is its purpose - to let the Israelis appear to be trying for peace, with a plan that can never even reach serious negotiation, in order to facilitate fastest-possible expansion.

The Zionists have pulled every conceivable trick, for decades, to steer attention away from these facts, because the call for an end to all the racism cannot be disputed or defeated any other way. The "two state solution" has been the foremost of these tricks. It's absurdly phony. It's appalling that the pro-Palestine or pro-equality movement has no historic memory and needs to be re-schooled in the meaning of "racism" every few years.

The obvious solution is to stop financing any policies of prejudice by anyone involved, and allow justice to replace prejudice, step by step, as in the US Civil Rights Movement.

We have been contacted by some of our members and supporters expressing concern about one of the puppets we use at campaigning events appearing to shake hands at the SNP conference with someone from a group called SNP Friends For Peace in the Middle East.

As current chair of Scottish CND I thought it would be useful to make the following points:

1. I understand that the SNP Friends for Peace in the Middle East group has similar membership to a group called Glasgow Friends of Israel. I also understand that unfortunately both these groups support current Israeli Government policies toward the Palestinian people. It is my view shared by many Peace Movement activists that these policies which include the building of illegal settlements on Palestinian land are cruel and heartless .

2. Scottish CND opposes the presence of nuclear weapons in Scotland and throughout the world. We are very concerned that Israel and a number of other countries posses nuclear weapons. Our secretary has recently returned from talks at the United Nations which are aimed at progressing a Global Ban on Nuclear Weapons.

3. In my view it is unfortunate that the group Called SNP Friends of the Middle East and Glasgow Friends of Israel seem to be trying to imply that their activities are endorsed by Scottish CND on the basis of a handshake with a puppet that we use at campaigning events.

4. it is quite easy to get a photo with our puppets at the events they attend. Over the last couple of years many individuals and group representatives have had their photo taken with the puppet. People tend to get their photo taken because they support the work of Scottish CND rather than their own publicity purposes.