As the crisis for refugees continues, our 'compassion-swept' media have moved seamlessly into familiar 'bomb-to-save' mode. And this goes well beyond the usual suspects.

Unsurprisingly, the Sun, Mail and other hate press have leapt upon the 'migrant crisis' as a call to war. Thus, could Owen Jones tweet:

The real cowards are politicians who
don't stand up to our thuggish press. 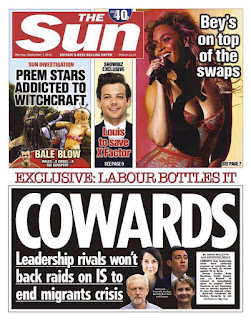 The virulent hypocrisy of the Sun should need no expanding upon. But what of the liberal thuggery of the Guardian, pontificating about saving refugee lives while advocating more bombs?

This, of course, is all stated in more 'moderated' tones than that shouted by the Sun. But it's message is no less loaded. With the lofty compassion-speak comes the same predictable war-speak:


The increase in refugee numbers heading for the EU describes a collapse of hope among millions of Syrians, many displaced in neighbouring countries, that their home will be safe again in their lifetime. To begin restoring that hope will inevitably mean international intervention of some kind. The establishment of credible safe havens and the implementation of a no-fly zone must be on the table for serious consideration.

And while Russia and Iran also get shot-down for backing Assad, not a word is uttered here about the mendacious role of the US/UK, Gulf states and Turkey in fomenting the conflict in Syria.

Nor, it seems, are the near-identikit column words of Guardian executive editor Jonathan Freedland coincidental:


Of course, this could never be a whole solution. Action for refugees means not only a welcome when they arrive, but also a remedy for the problem that made them leave. The people now running from Syria have concluded that it is literally uninhabitable: it is a place where no one can live. They have come to that conclusion slowly, after four years of murderous violence. To make them think again would require action a thousand miles away from the level of the district council, an international effort to stop not just the killers of Isis but also Bashar al-Assad’s barrel bombs.

That might mean the creation of safe havens and no-fly zones. More trenchant voices say the bombs won’t stop until anti-Assad rebels can fire back with anti-aircraft weaponry. Those wary of military action, which always risks making a hellish situation worse, prefer diplomacy. After the breakthrough on the nuclear issue, could there not be progress with Iran – whose military backing, along with Russia’s, has helped sustain Assad in power, and maintained his killing machine, for so long?

While Jones and others keep their convenient focus on the right-wing press, providing a 'moral' shield for the Guardianista, a fine piece from Adam Johnson helps confirm the deep involvement of the West/Gulf states, and exposes the 'do something' advocates. Specifically, regarding no-fly zones:


A) A no-fly zone would only be applied to Assad because anti-Assad forces don’t have an air force. B)  While it may sound like a simple humanitarian stop gap—and that’s no doubt how it’s being sold—literally every no-fly zone in history has eventually led to regime change. Which is fair enough, but those pushing for one should at least be honest about what this means: the active removal of Assad by foreign forces. Indeed, if one recalls the NATO intervention in Libya was originally sold as a no-fly zone to prevent a potential genocide, but within a matter of weeks, NATO leaders had pivoted to full-on regime change.

Johnson also rejects claims that this would have prevented the deaths of refugees like little Aylan Kurdi:


But here again, there’s some serious fudging going on by the Guardian. While there’s no doubt many of the refugees are escaping Assad’s bombing of cities, the boy in question, Aylan Kurdi, wasn’t: He was escaping ISIS and the US bombing of his hometown of Kobani, far from anything the Assad government is doing. A no-fly zone would not have saved his hometown. An absence of fueling jihadists by the United States and the subsequent bombing of said jihadists by the United States? Perhaps.

The suppression of these truths has become all the more vital as the smearing of Corbyn gets used not only to agonise over New Labour's lost 'entitlement', but also, now, as blame for blocking Cameron's efforts to 'liberate' Syria.

Again, as with Libya, the Guardian case for more bombing of Syria is being sneaked under the 'compassion radar'. And little effort is being made to identify and target it.

Instead, Jones and his peers have helped maintain a kind of 'no-fly zone' around the liberal media, protecting it from critical attack. While their own salvos are directed at the villainous Sun and Mail, 'safe corridors' of opinion are being kept secure for liberal journalists to moralise the case for 'intervention'. A sanctimonious 'cordon sanitaire', likewise, surrounds liberal-hawkish editorials, serving to deflect criticism over the 'bomb-to-protect' agenda.

It's entirely right to denounce your shrieking Sun, but your 'guiding Guardian' needs a closer kind of critical attention.
Posted by John Hilley at 15:07


That France and the Uk, U.S can just Say, let alone do these Bombings, Threats, Arming, Funding, is the result of the U.N being the greatest Cowards. International Law is in complete tatters. just heartbreaking.

@adamjohnsonNYC
"He gassed his own people!"
So did Saddam, but all we did is make things much much worse.
"HE GASSED HIS OWN PEOPLE!!"