Another week, another frontline assault on Jeremy Corbyn from the Guardian. It's a measure of the media establishment's panic that the 'Corbyn crisis' has now overtaken even the 'migrant crisis' (never, of course, a 'crisis for migrants') as the most pressing 'Operation Halt'.

Following Blair, Straw, Campbell and Johnson, David Miliband has now been rolled-in to deliver his stark warning over Corbyn. The Blairite rescue convoy now seems like an M20-type stack waiting in turn to denounce the menacing swarm of illegal entryists and system-threatening Corbynistas.

Alongside runs a relentless line of skewed 'copy' from Rowena Mason and other 'political correspondents'. Just how many smears, one wonders, can be crammed into a piece under that cover role? Mason is, of course, well attuned to such chicanery, having plied her trade for many years at the Telegraph.

If the Guardian, Channel 4 and the rest of our 'enquiring' media had the remotest integrity they would be headlining and exposing such fabrications. Instead, the slurs are 'reported', repeated and allowed to rest as part of a massively-weighted body of 'news' and opinion, supposedly 'balanced' by Corbyn's denials.

The much-hyped 'intervention' of Gordon Brown is a glaring case in point. 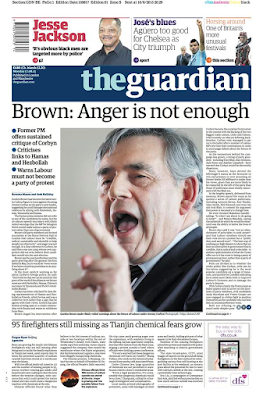 The Guardian wasted no time in getting him front-paged, with those all-important smear lines written-up, alongside, by Mason and her associates.

As with the Scottish independence vote, Brown has been wheeled-out as some kind of 'reluctant sage', intended as a more 'respectable' and persuasive figure than Blair or Campbell.

But, as with the Indy vote, and despite such favoured presentation, there's been a notable backlash against Brown's posturing, his fellow Labour 'saviours', and, increasingly, the Guardian itself for its complicit hosting of them.

In response, Guardian regular Suzanne Moore is now crying foul over 'hostile' Corbynites who are 'abusing' those 'daring' to speak out against Corbyn. Keeping up?

You should be able to express doubt about Corbyn without risking vitriol.

Note the coy use of words here: while an entire media effort to bombard Corbyn with abusive distortion can be reduced to "doubt", responses to it are to be condemned as "vitriol".


I am sure Corbyn genuinely does not want to sink to the level of yelling at his opponents, but the specialist subject of some of his supporters is vile abuse. This may just be the modus operandi of social media now, but it is unedifying to see that the mood music of those who would enact the socialist dream involves, at times, screaming at anyone who harbours any doubt about Corbyn. Express the slightest qualm about his potential leadership and you’re apparently a war-mongering moron who feasts on homeless people. Or, if you are Liz Kendall, basically to the right of Iain Duncan Smith.

At the risk of being labelled part of Moore's 'vitriolic pack', this is the most crass hyperbole, a facile sweep of the issues and debate, implying that alleged abuse from "some" on social media is somehow representative of, or particular to, Corbyn supporters.

More specifically, Moore laments that she:


was disturbed by the vitriol poured out against Gordon Brown this weekend, even while I’m aware of his flaws.

Again, note the passive use of "flaws", few of which are actually probed.  Instead, Moore uses her piece to talk-up Brown's 'respectable intervention', stoutly defending his record in office. Yet, amongst these "flaws", she conveniently fails to mention his central part as Treasurer in funding and supporting the war in Iraq.

Perhaps the passage of time has given Brown space for honest, moral reconsideration? Not so, as made abundantly clear in his own evidence to Chilcot, where he reaffirmed his support for Blair's motivations and conduct. This was nowhere to be seen in Moore's gushing account, not deemed one of his "flaws". A safe Guardian oversight, no doubt.

Likewise, Moore assures us, criticism of people like Blair and Campbell is "entirely understandable", but not applicable to Brown, who, we must assume from Moore's apologetic screed, was one of the 'silent waverers', a 'deep-down dove'.

Yet, as noted in his own unambiguous declaration, that was never the case. And if he ever did have 'quieter misgivings', why didn't he declare them before the slaughter and resign in good conscience?

The Guardian's coverage of Brown tells us much about the pernicious cycle of smear and containment. Firstly, there's the eagerly-hosted attacks from people like Blair and Brown, followed by glowing coverage from 'correspondents' like Mason, leading to Moore's kind of rearguard demonisation of those challenging those smears and the 'reporting' of them.

It's more mounting evidence of how the establishment line is crafted and peddled in 'crisis' situations, and the pressing need, in ever-civil manner, to expose, boycott and exit the Guardian.
Posted by John Hilley at 09:37

Superb article. Wish I could write as well - your demolition of Moore is spot on.

This is my more trundling open letter to her yesterday:

I should be very glad to host this article on Sodium Haze with your permission - it should get the widest possible coverage.

This is the first time I have seen the activity of 'some' on Social Media supporters generalised across the board...in such a blatant fashion! It is admitted! But, then done anyway. Almost as if they can't be accused of doing so because 'they did say "some"'. Such obvious propaganda.

It was also great getting your excellent open letter piece. Let's hope it all serves a useful collective message.


it's all a bit like the Daily Record now suddenly All for Corbyn, when during the indy reff they did all they could to back supporters of Trident, and the Iraq war. Then there was Brown and Co's (the Vow.)

What I find interesting about the antisemitism smears is that every source cited by the Guardian has a track record of Islamophobia - in Newman's case, she was caught lying to the public to incite anti-Islamic sentiment via social media. You will also note Corbyn's rebuttal of the claims was reported on the Guardian website with significantly less prominence than the claims themselves, with no comments enabled so as to keep web traffic and repeat viewing of the article much lower than others. As I recall, when it first appeared on the site, it was actually lumped in with the previous days' news articles on the lowest tier of the Politics section.

Cheers @ Beautiful Sakura. I totally agree with you about the disgraceful Daily Record. Also to be boycotted.

Thanks @ Brigonos. Yes, Corbyn's rebuttal received nothing like the profile given to the attack pieces against him. Note also how the constant smear-and-denial routine is intended to keep Corbyn on the defensive. We're seeing nothing of the same in the cases of Cooper, Burnham or Kendall. The establishment media know there's nothing substantive they can pin on Corbyn, so the strategy becomes slur-by-insinuation. Fortunately, many can see through it, finding the truth through social and independent media, but there's still no doubting the drip-drip effect of the propaganda. This is why it's so important to keep exposing such media and building a seriously effective alternative.