There was yet another tremendous turnout in Glasgow yesterday in support of the suffering people of Gaza.

Isn't it remarkable to think that, here in the heart of our Merchant City, while so many people are gathered from the furthest part of the Empire to enjoy the Games, the people of Gaza are under lock-down, not only being bombed, maimed and terrorised, but unable even to flee their slither of besieged land.

As yet another UN school crammed with civilians is assaulted, the third in ten days, it's been hard coming to terms with the horror of their situation.

Observing the images and imagining the terror, I still have feelings of incomprehension over how even such a ruthless, violence-addicted state could actually kill so many civilians, so many children, in UN refuges, schools and hospitals.

And with that sense of bewilderment, another question: how do they get away with it?

As Obama and Cameron issue their unctuous pleas for a ceasefire, forced to declare their grudging 'concern' over the humanitarian toll, the ships are still cruising into Haifa laden with US bombs and armaments for final, terrifying delivery into Gazans' homes. Disgracefully, Britain assists with drones, armoured vehicles, ammunition and other murderous technology.

And what, as despairingly, to be said of the BBC and wider media which, while relaying the terrible images from Gaza, still speak obsequiously of a 'two-sided war', still implying Palestinian blame, still failing to raise the key contextual issues of the occupation and siege? 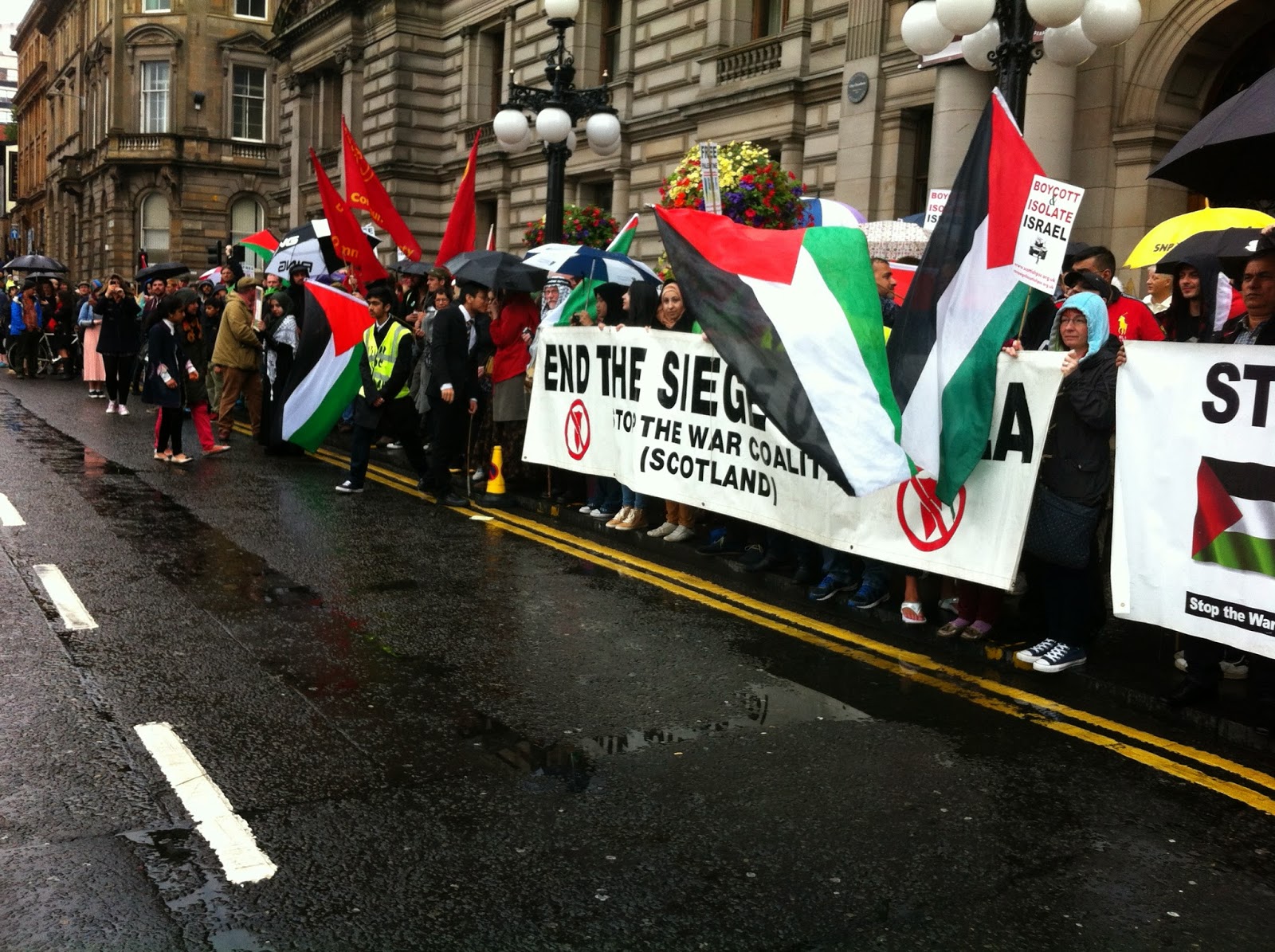 Just beyond George Square lies Nelson Mandela Place, an emblem of how Glasgow stood in solidarity during many of the darkest years of South African apartheid.

Yesterday, protesters stood in front of the City Chambers as a reminder of what has to be done now for occupied and apartheid-inflicted Palestinians, notably the adoption of real boycott and sanctions measures.

While Glasgow council should be doing much more for Palestine, many of the city's people already are.

And their admirable support makes at least one thing clear and comprehensible to this writer: that there will - however desperate things seem for the people of Gaza and the West Bank - be a day of justice and liberation for Palestine, a day when innocents will no longer be bombed and murdered, but able to leave their imprisoned land, to travel and return with dignity to their homes, to have the same basic human rights as others.

Hopefully then many of them will stand here in our city as a welcome and free people.

John it is heartbreaking the pictures and news coming out of Gaza. It is a desparate situation yet Gazans still help each other. The international western communities should be ashamed for the deafening silence.

As Obama and Cameron issue their unctuous pleas for a ceasefire, forced to declare their grudging 'concern' over the humanitarian toll, the ships are still cruising into Haifa laden with US bombs and armaments for final, terrifying delivery into Gazans' homes.

Even those unctuous pleas are too much for Bibi the Baby Butcher:

In a phone call with US ambassador to Israel Dan Shapiro, Netanyahu vented his anger, according to people familiar with the call.

Netanyahu told Shapiro the Obama administration was “not to ever second-guess me again” and that Washington should trust his judgment on how to deal with Hamas, according to the people. Netanyahu added that he now “expected” the US and other countries to fully support Israel’s offensive in Gaza, according to those familiar with the call. They spoke on condition of anonymity because they were not authorised to discuss the matter by name.
--------------

"SHUT UP, OBAMA, AND GIVE US OUR DAMNED MONEY!" shouted The Butcher.

And so it was done.

The White House had originally requested about $176 million for the system for 2015, but lawmakers increased the amount. Congress often increases funding for Israeli security projects sought by the president.
------------
We've got huge problems here in the U.S. Congress left town without doing anything about any of them. But they gave Bibi his war crimes money.
~

Thanks, Anon. Yes, utterly heartbreaking, but what resilient spirit among the heroic people of Gaza.

Thanks, ifthethunderdon'tgetya. What a truly sordid relationship we see here between the butchering Netanyahu and his shameless paymasters.

Just think too how the military corporations running Iron Dome, bombs and guns into Israel must be revelling in all of this.

Well Said John...and its heartwarming to see the people of Glasgow out again.

I was at the protest on the 19th July in the city...great turnout then too, we walked all the way from the concert hall steps to the BBC building.

So heart breaking what the Evil Btds are getting away with.

there is some great works being done on Dandelion Salad. Great collection of writers in there.

Thanks for the Piece here John.

Thanks, BeautifulSakura (how do you guys all have such great names ;)), yes, wasn't that just a great demo too?

Cheers for the link.