What's sort of messages and impressions might we assume from these two pictures? 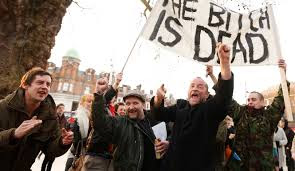 The particular circumstances of each death may be different, but political and media reaction to the revelry is much more telling: the demonising of one set of party-goers, the extolling of another. One is permissible cheering over the state's illegal elimination of a 'leading bad guy', the other an impermissible gloating over a 'leading lady' deeply involved in the elimination of people, economy and society.

Yet, while vital differences of motive and expression distinguish the respective assemblies, both still share an apparently similar emotion: taking pleasure in the death of an enemy.

The problem of such expression isn't just its 'inapropriateness', its lack of 'conventional respect' for the dead. Nor, more particularly, should we heed the kind of coy establishment etiquette that would have us keep quiet about the mass crimes committed and supported by an infamous leader like Thatcher.

This is someone, after all, whose dark activities included support for Pol Pot's Khmer Rouge and other dictators like Suharto, someone who backed Reagan's murderous killings and death-squad coups across Latin America, who condemned Mandela and thought the US shooting-down of an Iranian civilian plane was "understandable". And that's before we even get to the historic crimes and miseries inflicted at home.

As millions are spent on a quasi-state funeral, with its royal presence, bowing politicians, militarist trappings and media deference, we not only have a right but a duty to speak out in marking the actual victims of Margaret Thatcher's cruel policies.

Yet, in doing so, how might we offer something which transcends such brutality, that which supplants the US mob's shallow concept of victimisation, that which offers a real progressive alternative, something more worthy, more compassionate, more humanitarian?

When Elvis Costello sang Tramp the Dirt Down, he was, like many long-sickened others, expressing due contempt for Thatcher and her ideological vandalism. But that sentiment doesn't in itself simply translate as a vengeful urge. Rather, it admirably lyricises the systematic abuse of people and a yearning for it to end.

So, the problem is certainly not the demonstrations against Thatcherism. It's not even the understandable antagonism we might have towards Thatcher herself as a person. It's the more corrosive and debilitating feelings of hatred, anger and retribution that often drive that opposition.

While many at the Thatcher street parties seem genuinely motivated by a legitimate desire to mark the iniquities of Thatcherism, open jubilation over the actual death and/or suffering of another, any other, should cause us to think about the psychology behind those emotions.

Many - notably those not born when Thatcher was in power - see such actions as a continuous statement of opposition to the current Tory ensemble, the new wave of cuts, TINA-type austerity and ongoing neoliberal disorder.

Yet, need this laudable exercise involve "rejoice, rejoice", champagne-popping and other hell-wish sentiment?

Indeed, do such personalised messages and retributive impulses suggest some replication of the  strident language and callous actions already projected by Thatcher and people like her?

As Martin McGuinness has said, in urging an end to celebrating Thatcher's death: "She was not a peacemaker, but it is a mistake to allow her death to poison our minds."

One also thinks here, as in the US example, of Hillary Clinton cackling about the death of Gaddafi: "We came, we saw, he died."

Is this what leftist responses to the death of even such a proclaimed enemy should look and sound like?

Some of this mirrors a more dubious 'left vanguardism' which, in its 'moral confidence', feels a need to demonstrate its 'full radical credentials'.

For others, it's a fair and necessary occasion, as in places like Glasgow, to recall evils like the poll tax and to counter the much more indecent Thatcher hagiography being propagated by the media.

For others still, Thatcher's passing will likely provoke a more resigned set of feelings, a deep lamenting of the Thatcherite 'project' with the realisation that her departure still takes us nowhere useful: the key ingredients of that ugly assignment - greed, individualism and selfishness still prevail.

In an exemplary piece of humanitarian reflection, Russell Brand notes the perplexed emotions of a leftist friend who thought he'd be elated rather than have to confess the empty melancholy he actually felt on hearing the news:


"This demonstrates, I suppose, that if you opposed Thatcher's ideas it was likely because of their lack of compassion, which is really just a word for love. If love is something you cherish, it is hard to glean much joy from death, even in one's enemies."

And what, after all, is 'the enemy' here?  Is it a person or a thing: Thatcher or Thatcherism? How easily do we project hatred towards leaders rather than try to comprehend and oppose the systems they serve?


"For me, hatred of individual leaders is an example of a kind of propaganda weathering and erosion - constant exposure to the corporate fringeswamp encourages us to focus towards leaders and away from systemic trends and underlying causes. If Thatcher was The Evil, then how do we explain Reagan, political 'convergence'  (Bush/Blair/Cleggeron, etc), US-UK foreign policy over centuries, the psychopathic corporate system, etc?

Thatcher was much more of a symptom than a cause. But our egos feel so good hating a symptom, especially as part of a mob brandishing our fiery torches. Working to address the more impersonal causes is much less exciting, especially as the ultimate causes are also very much in ourselves - our minds and particularly our thought-identified egos." (ML message board, 9 April 2013.)

An illuminating answer from Buddhist scholar John Makransky in his article Aren't We Right to be Angry (also posted by Media Lens) offers further clarity:


"Many activists see anger as a necessary and motivating force. Is there anything positive about anger? Most who attend my social justice retreats are social justice activists, including teachers, social workers, and health-care givers who see a need for systemic change. Many say, “My anger at injustice is what motivates me to work for change. So it doesn’t make sense to me to reject my anger.” Actually, given what we’ve discussed so far, I think there is truth in that. They are saying that anger is not just deluded, that they sense some wisdom in it, and I think that is true. For example, in trying to make oneself feel safe, anger knows that a ground of safety must be findable somehow. That’s true—there is a ground of safety here within the depth of our being, the deep nature of our minds, which we should try to find. Anger also knows there is something terribly wrong that must be destroyed to make things safe. It’s just wrong about all the details. Anger thinks that what’s wrong is another person or group that must be defeated or destroyed to establish dependable safety. That’s a big mistake. What’s wrong is how out of touch we all are with our fuller humanity and underlying potential of goodness. To correct that wrong, something does need to be destroyed, but it’s not other people; it’s the self-centered fixation that has everyone in its grip, which generates individual and social reactions that make things unsafe for all. So I think some social justice activists want to defend their anger because it indeed contains some wisdom, but it is a distorted form of wisdom. If the wisdom in anger could be liberated from its distorted projections, its intense energy could clarify into wrathful compassion."

What the powerful fear most is not these expressions of hate or even violence. Indeed, in many situations, like Israel's suppression of the Palestinians, they positively welcome, and will often promote or effect, incendiary feelings and actions that can, in calculating turn, be even more fiercely suppressed.

What power fears most is passive resistance and the much more 'dangerous' idea of compassionate activism.


"When Martin Luther King demonstrated against social institutions of racism and economic inequality, his opponents used attack dogs and whips on him and his followers. Yet King repeatedly taught that unconditional love is the key to foundational social change. He taught that we must confront social structures of racism on behalf of everyone, including those supporting such structures. It was never only for the oppressed people. It was also on behalf of the racists, and he made that clear."

If there's such a possible humanitarian lesson to be noted here in the week we recall Thatcher's brutal policies, it's to think about how we might best focus our constructive attentions on systems of power rather than just hateful denigration of those who serve and manage them.

This most certainly shouldn't, and won't, preclude criticism of leaders like Thatcher - even on her  funeral day - and, as with shameless denouncers like Tony Blair, resilient efforts to bring still-living offenders to proper justice.

Rather, it asks us to reflect on what motivates those more aggressive feelings and how they might be more compassionately and radically directed.
Posted by John Hilley at 09:27