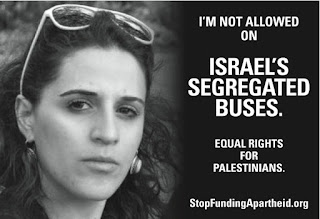 The formal introduction of segregated buses in Israel brings increasing world attention to the daily reality of the state's apartheid practises.

This comes on top of other daily intimidations faced by Palestinians travelling on public transport, with buses routinely stopped and Palestinians forced to endure long delays while humiliating ID inspections are carried out.

Of course, settler-only roads are already the norm across the West Bank.

Yet, as this fine account from Israeli writer Mya Guarnieri shows, buses on routes between Jerusalem and the West Bank are already, effectively, segregated.

In contrast to clean, efficient bus stations and services to and from the settlements, Palestinians have to deal with basic, cramped and delayed ones to anywhere else in the West Bank, the dual system all ridden with pernicious ways of keeping people apart.

Guarnieri recounts one such journey returning from the West Bank:


Coming back in, segregation hits home again. As settlers and Egged buses fly through the checkpoint, an Israeli child-soldier uses his gun to wave the Palestinian bus over to the side. The passengers, myself included, get down and file into a cage reminiscent of something sheep would be herded into as they were lined up for slaughter. Israeli border police check the empty bus, and then check IDs of the tax-paying East Jerusalemites as they board.

I remembered that segregation is the norm recently when, as I flashed my teudat zehut, a soldier-girl realized that I was a Jewish Israeli. “What are you doing here?” she whispered to me, in Hebrew. I guessed that she worried that the Palestinians might hurt me if they knew my status.

I shrugged, “I work in Area B.” She hesitated, staring at my ID. She couldn’t seem to wrap her head around the idea that there would be a Jewish Israeli on the Palestinian bus. “I teach at the university,” I continued. “I go through this checkpoint every day.” She glanced at the girls in hijab behind me and leaned close to me. “Take care of yourself,” she whispered.

The imagery of separated commuting is deeply reminiscent of apartheid South Africa and the 1960s bus segregations in America's Deep South.

It's yet another display of settler superiority and overtly racist discrimination against Palestinians, all overseen by the state and enforced by the Israeli police. 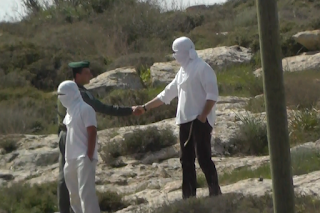 The same message is captured in this menacing picture of colluding IDF Border Police following vigilante settler attacks on Palestinian shepherds herding cattle on their own land.

From the protection of settler colonists to the prioritised busing of settler passengers, every aspect of daily life for Palestinians is conditioned by state-assisted violence and discrimination.

Besides the prison camp that is Gaza, this debased existence for Palestinians in the West Bank, East Jerusalem and inside Israel is now drawing a more globalised gaze and prompting significant criticisms even from noted Israelis, as in this warning from former Israeli ambassador to South Africa Alon Liel:


“In the situation that exists today, until a Palestinian state is created, we are actually one state. This joint state — in the hope that the status quo is temporary — is an apartheid state ...”

Liel has also cautioned Obama not to visit the region unless he comes with some constructive intention of facing down Israel's apartheid system:


“If you, President Obama, intend to come here for a courtesy visit — don’t come. Don’t come! We don’t need you here for a courtesy visit,” Liel said. “You cannot come to an area that exhibits signs of apartheid and ignore them. That would simply be an unethical visit. You yourself know full well that Israel is standing at the apartheid cliff. If you don’t deal with this topic during your visit, the responsibility will at the end of the process also lie with you.”

As in the once darkest Deep Souths, of America and Africa, there will, one hopes, come a day when people across the world will look back in bewilderment that such blatant segregationist, racist and apartheid policies could ever have been enacted or allowed to persist.
Posted by John Hilley at 14:37