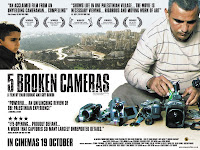 The enduring value of the Oscar-nominated docu-film 5 Broken Cameras lies not only in exposing the stark imagery of Israel's relentless crimes but in reinforcing the fact that we, the viewer, have now 'witnessed' some of them.

Despite the pain and brutality on show, there's something deeply reassuring about the product of these cameras, captured by Emad Burnat the Palestinian villager and co-director Guy Davidi, for all the world to see.

And the film's deeply human appeal is reinforced by Emad's video-charting of the struggle alongside the personal pain and development of his own family, particularly in watching newborn son Gibreel grow up.

Bearing witness to the daily occupation in Bil'in village and the relentless spirit of Palestinian resistance, we observe the illegal 'security barrier', its massive military protection, the searing tear gas and lethal rubber bullets, the piercing sound grenades, the beatings and wilful killing of a non-armed civilian during one of the Friday demonstrations.

Back around the village, we see the house invasions, the intimidated families, the arresting of fathers and sons and the frightening assaults by hilltop settlers as the army stand culpably by.

We also witness the small ingenuities of peaceful opposition, the moving comradeship of Emad's associates, the fraternity of international supporters and many other heart-rending insights of a community united in adversity - scenes, feelings and a spirit of remarkable fortitude which friends and I have personally witnessed while protesting at Bil'in.

Amid one chaotic attack on demonstrators in nearby Nil'in village, we also, through the film, 'become witnesses' to an Israeli soldier, himself witnessed by other soldiers, shooting a passively-bound, arrested man in the legs.

The wanton cruelty of the act seems to typify not just the Israeli state's illegal land grab, but the ruthless way in which it dispenses summary punishment, even knowing that others may be filming or otherwise witnessing such wicked acts.

Repeatedly, we see the cameras being deliberately shot up and smashed. Uneasy soldiers also warn Emad not to film them.

Yet, they must also comprehend that the footage which is being recorded still captures them in all their merciless aggression.

Which begs the more disturbing question: is there some other underlying desire here that such violence, and the gratuitous ability to inflict it on defenceless others, actually be witnessed?

It's perhaps the darkest paradox of Israel's cultivated image: reiterating constant propaganda that it acts as 'the world's most moral army' while displaying naked pride in its capacity for calculated violence.

Beyond the expected human-rights condemnations, state leaders and those executing such violence derive not just personal satisfaction from it but the perverse knowledge that the very witnessing of it bestows upon them a sense of untouchable power, domination and superiority.

So it has been with the merciless attacks on Gaza and murdering of convoy peace activists.

Anyone, whether politician, general or ordinary soldier, who initiates, orders or carries out such atrocities are straightforwardly responsible for or party to such crimes. But others informed through this and other such films also bear vital witness to them.

In another paradoxical twist, Israel has falsely proclaimed the Oscar-nominated film an 'Israeli product' (due to Israeli-born Davidi's involvement and some Israeli film group funding) while obviously aware of its damaging content. Again, we can but speculate that this allows Israel to proclaim its 'free-speech' credentials, while, despite the film's damning imagery, imparting the desired message of Israel's violent superiority.

All of which makes it especially important for an Israeli audience. In recording the immense dignity, resilience and despair of the Palestinian people, 5 Broken Cameras is a film asking for particular due witness from Israel and its people.


This documentary should make every decent Israeli ashamed of being an Israeli. It should be shown in civics classes and heritage classes. The Israelis should know, at long last, what is being done in their name every day and every night in this ostensible time of no terror. Even in a West Bank village like Bil’in, which has made nonviolence its motto.

Implicitly, the film is also marking the truth that those crimes have all by now been well witnessed by Western supporters of Israel's oppressor state and by complicit media, like the BBC, which have lamentably failed to do with their powerful cameras what this honourable man with some humble technology has managed to do with his.

In bringing this fine film to the world, Emad and his associates are effectively saying to all those parties:

It's all here to see, as experienced, witnessed, filmed and archived, so you can never, ever pretend that this shameful abuse and suffering isn't happening or, looking back, that it never happened.
Posted by John Hilley at 15:27