Gaza: the horror goes on 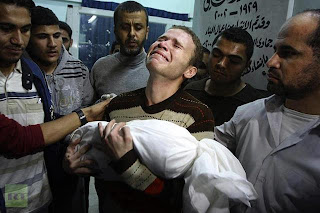 The death toll is in Gaza is mounting, as Israel bombs another home, killing 11 civilians.

As of Sunday 18 November, 65 Palestinians have been killed, 19 today alone, including 9 children.

Among the victims lie the babies, murdered not with indiscriminate disregard, but with conscious intent to inflict the greatest terror and the most painful possible suffering.

Little Omar died when a shell hit the family home.  Omar's father, Jihad Misharawi (shown here holding his son) is an Arabic picture editor for the BBC. His sister-in-law was also killed in the attack and his brother badly injured.

Another of the victims, so far, includes Marwan al-Qumsan, a teacher at a UN school in Jabalia.

Key evidence now reveals that Israel deliberately lured Hamas figure Ahmed al-Jabari  into the open in order to kill him, his murder and violation of the truce intended to escalate the crisis:


"Gershon Baskin, founder of the Israel/Palestine Center for Research and Information, told Channel 4 News that negotiations were in progress and Ahmed al-Jaabari might have been persuaded to suspend rocket attacks on the Jewish state had he not been targeted for assassination."

Baskin also insists that Hamas have consistently asked for intemediary help in getting ceasefires put in place:


"He told Channel 4 News: "I know that Jaabari was interested in a ceasefire. He has enforced ceasefires in the past months and he was prepared, we hoped, to engage in activities that would prevent attacks against Israel, thereby preventing a pre-emptive Israeli strike that kills people and causes people on the Gaza side of the border to throw rockets at Israel. "Every time there was a round of rocket fire I would get phone calls from Hamas: 'Please tell the Israelis we don't want to escalate. We want a ceasefire.' As it would escalate, I would get more and more phone calls with greater intensity.""

Today, as Netanyahu again promises to "widen" the offensive, Alex Thomson of Channel 4 News reports from Gaza on Israel's attack on a building housing journalists:


"Israel admits it knew journalists were in the two buildings they hit. A cameraman Khader al Zahhar lost his leg."

Thomson describes more of the fear and pain on the ground:


""Drones overhead. Kids playing street football outside TV building that got hit," Channel 4's Alex Thomson tweeted. He was visiting the main hospital in Gaza City on Sunday where he said relatives were trying to collect the bodies of family members including a 13-year-old girl."

As in 2008/9, it appears that Israel's defining motive is to terrorise and kill any civilian.

Meanwhile, as the slaughter continues, so too does the relentless BBC bias, as collated here by Amena Saleem.

For another fine piece denoting stark BBC distortion and the "sequence of recent events, so lacking in 'mainstream' reports, that led to Israel's massive attacks on Gaza", see the latest Media Lens alert, Gaza Blitz - Turmoil And Tragicomedy At The BBC.