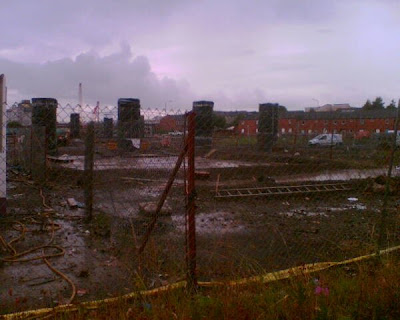 It's coming. Soon. Like some all-consuming demon devouring every physical and rational obstacle before it.

The M74 link extension, a five-mile piece of motorway due for completion in 2011, will cut a merciless swath through Glasgow. The road will slice the city's populous south-side, bringing urban disconnection, chronic pollution and human displacement. Those hoping for extended urban regeneration promised by the nearby New Gorbals will now have to contend with a motorway in the middle of their neighbourhood. It's Glasgow's very own Age of Stupid.

From a new M8 exit at the Kingston Bridge to the Eglinton Street crossing - or Port Eglinton Viaduct as they've grandly designated it - multiple sets of looming columns, black-clad for temporary protection, stand like occupying giants ready to take the mass weight of road sections. Soaring above the main rail line and local businesses, the planners are hailing it as a triumphant structure. None, I'm sure, will have to live under its grim shadow.

Unlike the 'architectural' salariat who revel in such vandalism, residents of the small red-brick terraced houses on adjoining Devon Street can only gaze out in dreaded anticipation of the mass lines of traffic about to sweep across their window view. This was never pretty landscape. But it's about to become an even uglier dystopian nightmare.

The word "viaduct" is suggestive of heroic Roman edifice; progressive engineering bringing forth water, linking canals, spanning impossible gorges. This is a corruption of those noble feats and ideals.

Travel in places like Holland and you'll see motorway embankments and risings that have, at least, been made to look 'neutral,' even, dare one say it, artistically pleasing. There's nothing of that wasteful aesthetic here. This is big muscle concrete. Get used to it.

What might lie in the time capsule deep beneath this latest monument to car culture? Pictures of a pre-disturbed landscape? Sundry items depicting Glasgow circa 2011?

Maybe someone will think to include the Hickman Report (July 2004), commissioned by the Scottish Government and ignored, when published, due to its damning recommendations against the project. It probably won't get a place in the nostalgic casket, but it's been well and truly buried by a political-planner-business coterie determined to assure us 'unenlightened' citizens of the project's commercial, economic and environmental 'benefits'.

Uncomfortably for the high approvers, Hickman couldn't have been more specific in his considered disapproval. This road, he concluded, will have severe environmental consequences, including "community severance" problems, increased noise pollution and visual intrusions at multiple "sensitive locations". It won't reduce surface traffic significantly on Glasgow's streets, merely displacing it elsewhere, including approaches to new motorway junctions, while adding significantly to CO2 emissions. It will result in a higher volume of pollutants and potential health problems, as noted in witness evidence, for local people. The "regeneration" effect, notes Hickman, should also be treated as "cautionary", with the jobs created not necessarily all linked to the project involved.

In short, the detrimental warnings were all dutifully issued by Hickman:

"Drawing these numerous elements together, the evidence has shown that the proposal would be likely to:

* seriously hinder the achievement of important Scottish Executive commitments and objectives for traffic reduction, public transport improvements, and CO2 emissions;
* have very serious adverse impacts on the environment of communities along the route, both during construction and in operation;
* be at variance with policies to promote social inclusion and environmental justice;
* temporarily ease traffic congestion, to the benefit of car commuters and road freight transport, but that these benefits would be progressively lost due to continuing traffic increases, in the absence of measures to restrain and reduce traffic; and
* make a positive contribution to the local economy in Glasgow, South and North Lanarkshire, Renfrewshire, and East Renfrewshire, at the expense of the Forth valley, the Stirling area, Ayrshire, Inverclyde, and West Dunbartonshire.

"11.97 Drawing these various strands together, and looking at all the policy, transport, environmental, business, and community disadvantages of the proposal as a whole, it must be concluded that the proposal would be very likely to have very serious undesirable results; and that (in the context of the advice in the SACTRA report, the transfer of jobs from other parts of Scotland, and the potential harm to existing businesses along the route) the economic and traffic benefits of the project would be much more limited, more uncertain, and (in the case of the congestion benefits) probably ephemeral."

The six lane highway through the city will now cost in excess of £692 million, making it Britain's most expensive stretch of road, to date. Alongside the latest price hike, the contract award is also wrapped in controversy over a sole consortium tender. It's a colossal sum of public money that would have been better spent on sustainable transport infrastructure.

Part of the cost includes sealing contaminated land along the route to the connecting east-end Fullarton Junction, much of it polluted by chromium and other heavy metals. A construction worker at the Farmeloan Bridge section told me how those on site had been warned to "report any green substances" coming up through the ground. That must be a comforting thought for the people of Toryglen, Rutherglen and Farme Cross living alongside, also waking-up to the increased prospect of congestion-fuelled respiratory diseases. The violation of natural landscape at Auchenshuggle Woods seems, likewise, of little concern to the zealots of 'development'. As ever, human health and aesthetic rights come a long way behind corporate-defined 'progress'.

It's a staggering project to match the staggering indifference, incompetence and stupidity of its sponsors. Transport Scotland, Glasgow City Council and the corporate cabal they jointly serve have little regard for the eco implications here: private sector imperatives simply come first.

In recognition of widespread calls, and in anticipation of the crucial Copenhagen climate change summit in December, the Scottish Parliament has just approved a 42 percent cut in carbon emissions for 2020 - ahead of the UK's 34 percent target for 2020.

While still allowing for technical opt-outs, the vote has been cautiously welcomed by Stop Climate Chaos Scotland chairman, Mike Robinson:

"It means Scotland's climate change bill has the toughest target of any industrialised nation in the world and will be held up as an example, ahead of the climate talks in Copenhagen in December, of what can and should be done". This is a moral commitment and we hope other developed nations will hear this call for action and follow Scotland's lead."

That 'model lead', alas, remains severely compromised by the Holyrood government's business-driven positions on aviation and road expansion. And this latest carbon-spewing roadway is a shameful testimony to their contradictory environmental claims.

Meanwhile, some worthy chroniclers at the urbanglasgow website are helping to record the ongoing construction/destruction for posterity, with pictures, articles and comment.

We can but wonder how this grotesque structure, and the case for it, will be judged in, hopefully, more eco-enlightened years to come.