GPHRC at the Scottish Parliament 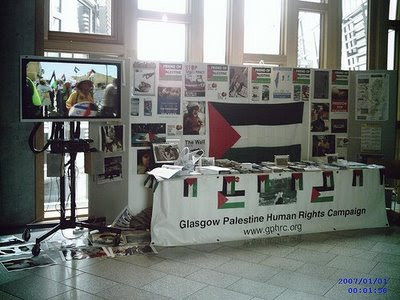 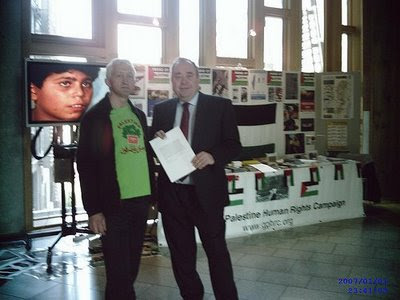 Glasgow Palestine Human Rights Campaign have just spent a very productive week at the Scottish Parliament holding an exhibition and lobbying for increased action on behalf of the Palestinian people.

We were most pleased to have a wide range of MSPs, parliamentary staff (of all levels) and members of the public (many on tours) stop to express their approval and support.

S3M-3760 Sandra White: Israeli War Crimes Confirmed—That the Parliament condemns in the strongest possible terms what has come to light from the admission by Israeli troops in testimonies made to Danny Zamir, head of the Rabin pre-military academy, that civilians were deliberately targeted during Israel’s recent offensive in Gaza, including accounts of an unarmed old woman being shot, a woman and her two children being killed after Israeli soldiers ordered them from their house and into the line of fire of a sniper and soldiers clearing houses by shooting anyone whom they came across; expresses serious concern that many soldiers believed that they were fighting a religious war given the fact that booklets distributed by military rabbis had given the clear message that "we are the Jewish people, we have come to the land by miraculous means, and now we have to fight to remove the Gentiles who are getting in our way and preventing us from occupying the Holy Land"; believes that this amounts to the admission that the Israeli state is operating a programme of ethnic cleansing, and calls on the international community to initiate proceedings to bring those responsible for these atrocities to justice and for international sanctions to be placed on Israel.

It was also very heartening to have First Minister Alex Salmond come over and express his outright support for the Palestinian cause and be pictured holding a copy of the motion.

Our hope is for a development of proactive support for the Palestinian case. Much of this is already explicit in the work of the parliamentary Cross Party Group on Palestine - as illustrated by the recent visit of cross-party members to Gaza. We urged in our discussions with various members of all parties the need to keep a committed and united front in finding ways of pressurising Israel over its continued occupation, aggression and apartheid policies.

Although subject to reserved Westminster powers, we suggested that part of this strategy might include more critical examination of Israel's trading practices within Scotland, in the context of Israel's favoured EU trade arrangements. While the parliament has no (for the present) authoritative powers or inclination to back the boycott, divestment sanctions (BDS) agenda, we'd like to see the authenticity of that gathering international strategy promoted by individual members and their parties.

We also talked of ways in which Scotland could forge closer political and cultural ties with Palestine as a way of expressing our particular support as a country. The analogy of Scottish solidarity during the dark days of apartheid South Africa comes to mind.

Awareness over the six decades occupation, Israel's ethnic cleansing and the resilient suffering of the Palestinian people is gathering impressive momentum. As a campaign, GPHRC are very aware of the emerging sympathy on the streets for the Palestinian people. Raising the issue of their plight, and Britain's own dirty arms-producing and political role in it, can, and should, be something that's within the scope of a 'parliament of the people'.

Thanks Joe. I'm usually more involved with action outside the parliamentary corridors, but it's good to see elected figures at Holyrood, including Salmond, take an openly supportive position on Palestine. Consider, in contrast, the Zionist apologetics of Brown, Miliband and other Labour Friends of Israel around the Westminster village.

It's another clear reason, in my view, for independence. If this parliament had actual powers over foreign policy, we'd be in a potentially new ball game in bringing state pressure to bear on Israel.

Thanks for that John.

The Scottish Parliament is a haven of sanity, given what the poor Palestinian folk have been getting put through only just recently, never mind the on-going permanent state of war crimes atrocities levelled at them.

pps
I'm sorry about my previous comments to your site John - things mis-fired and I didn't do your blog the justice it truly deserves - it was my fault for things that were amiss.

Thanks Joe - and no worries about previous contributions. All part of the cut and thrust of debate over key issues that we all feel passionate about.