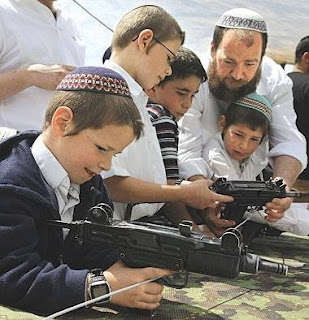 A picture, as they say, is worth a thousand words. And, in this case, quite a number of critical questions.

This disturbing image raises an immediate one about the inculcation of hatred and violence into young minds: just what kind of psychological damage is being inflicted on such children?

Nurturing a fascination with guns is deplorable in itself. Combining it with parental messages that Palestinians are the dark reason for holding those arms is a more alarming abrogation.

Which begs this related question: what state 'educational' purpose is being served here?

Ehud Olmert and other Israeli high officials seem ready to condemn settler attacks on Palestinian villages. Yet, the legitimation of such violence is rooted in the Zionist pedagogy that nothing will stand in Israel's way. And that requires successive generations, settlers and non-settlers, being taught and raised to believe in the 'god-given' right to use guns against Palestinians. From school defence drills to conscription, this, after all, is a society weaned on militarism and irrational fear.

Few images of this incriminating sort ever make it to the mainstream news screen. Yet, it takes little imagination to see how such a picture would be disseminated if it was Arab/Muslim children handling guns.

The media is awash with condemnations of Palestinian youngsters in martyrdom pose. "They raise their children as terrorists", so the chorus goes. It's a facile distortion, ignoring not only the pain and loss felt by Palestinian parents intent on living in peace with their families, but the enduring question of why there's this recourse to armed resistance in the first place.

Thus, the core problem still returns us to the violence of Zionism, the raison d'être of the Israeli state. Not even a two-state solution will address that fundamental issue. Nor will it check the siege mentality and military psychosis being fostered in the minds of Israeli children.

Even beyond proto-concessions and altered lines on maps, any encouragement to real long-term peace and justice will have to negotiate these more psychologically-rooted questions.