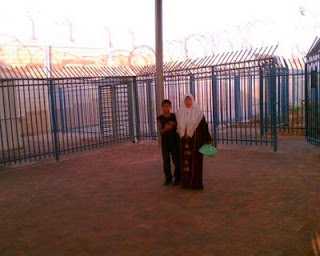 Qalandia checkpoint, oppressive gateway to and from Ramallah. The usual humiliations. Metal turnstiles, green and red flashing lights, baggage and fingerprint scanners, and, on cue, a female IDF officer barking her shrill orders through a blaring tannoy.

The recipients of her abrasive pitch are young Palestinian mothers with babes over their shoulders, rushing back and forth between the scanners and thick glass of the reinforced bunkers. Inside, the officer, quite oblivious to their stress, inspects their permits, still addressing them as some kind of subhuman species. There's a distinct air of excited superiority in her voice. A pleasure in the power. Just another cruel, demoralising scene, played-out every day at this and other clinical checkpoints across the West Bank.

On the other side of the high metal fence, Palestinians are returning back into the West Bank, their permits inspected, with just one remaining turnstile to exit. It's six-ish, Friday night, and people are rushing to get home in time to break Ramadan fast. We notice a particularly large swell of people at the exit gate which, for no apparent reason, remains locked. Ever-used to such indignities, they wait.

The time goes on, with no sign of the green light coming on. We go over, asking, through the iron railing, what the hold up is for. No one knows. Some ask if we can help. We approach an army booth on our side of the fence, gesturing to another female officer inside: "Why the hold-up? Why is the gate closed?" She shrugs dismissively, waving us away. We persist, drawing her attention again to the, by now, growing and irritated crowd. Again, she waves a contemptuous hand and resumes eating crisps from a bag. We insist some more, and, finally, after making a call, leaves the box, followed by three heavily-armed soldiers, making their way towards the locked-in Palestinians. We move back to the fence as one of the radio-speaking soldiers winds his way to the front of the crowd, the others behind. And then we see the object of their advances: a lad of no more than ten or twelve standing with an old lady, probably his grandmother.

Seeing them approach, the child begins crying and shaking in terror. We manage to put our hands through the fence, holding the boy's shoulders, trying to reassure him while asking the soldiers why they want him. By now, he's gripping on to the old lady, terrified and wailing. But the soldiers manage to prise him off. Our presence and protests elicit a certain 'cautious' handling. But it can't offset the fear in his eyes. Both are led away towards another open compound, the line of soldiers ignoring our repeated requests for an explanation as they pass us on the other side of the fence.

The boy and old lady stand uneasily, as we call through to them while phoning to report the situation. As the large crowd, many angry, are eventually allowed to exit, they are both led away through another set of locked gates, forlorn and fragile figures dwarfed by the steel fences and uncaring power of this brutal system. A man on the other side waits and thanks us for our attentions, his eyes registering the usual knowing resignation.

The service bus at the other side now gone, we're processed through our side of the facility, the shrieking officer still in full flow. Presenting my passport, I ask her (déjà vu) why she can't, at least, speak to people in a civilised manner. The response is sharp and indignant: "Why would you want to be involved?" "We're all involved", I remind her, "in our responsibility for others." She wants to know if I'm a journalist or some kind of observer. I tell her I'm a tourist, careful to retrieve my passport her colleague has been examining, though, in walking away, let her know that "I'm more involved than you think". "You, you come back here", she screams through the blaring loudspeaker, angry at being rebuked by this 'meddlesome outsider'. I ignore her hollering and walk on through the gate.

Back on the bus, we reflect on the little boy's terrified face. There's something particularly disturbing about children being led away and traumatised in such ways. Even if, as is the case, many get 'used' to such treatment, what kind of long-term psychological damage does it suggest?

Another day, another long, slow line-up of Palestinians at Huwarra checkpoint, outside Nablus. The broken approach track, with its sharp, jagged stones, make it difficult for people to walk. No pavement. No consideration. Just one more inconvenience for people deemed unworthy of the basic rights and conditions most Israelis take for granted. 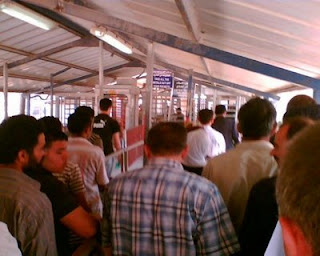 "Listen to the soldier's orders", read the signs in English and Arabic. Not, "Please have your documents ready" or other such courteous instruction. It's all part of the daily humiliation, the language of occupation designed to make a people feel inferior and beaten.

Today, the sweltering detention pen is occupied by a young Palestinian lad of about fifteen. We go around the side metal fence, calling over to ask him why he's been detained. Because "I smiled at the soldier", he tells us, gesturing the sign on his face. Asking the soldiers on the other side why he's been held, we're met with a series of excuses ranging from the lame to the fantastic. His papers are being checked over, says one. So, why has he been there an hour already, we ask? Such people have to be investigated by the Israeli secret intelligence, another informs us. We marvel at his ability to straight-face this incredulous lie.

The more plausible reason can be seen in the zealous behaviour of the officer who has likely locked him up. Nor can he contain his open hatred of us for questioning his actions. "You step over that blue line once more", he fumes, "and I swear to God...."

The painted blue line is where human rights observers sometimes stand watching for abuses. It's a token concession allowing a veneer of 'accountability'. Some observers see the pretence of it all, and the way in which they're despised as 'self-hating Jews' by the soldiers. Others, alas, seem naively taken-in by the facile 'liaison' with the officers, believing the soldiers are "just doing their job".

With no one else to observe that day, we wait to secure the boy's release. Meanwhile, I chat to a young Palestinian ambulance medic who relates the difficulty people have in coming through even the so-called "humanitarian queue" for women, kids, the elderly and foreigners. The other two are the men's queues, from which young Palestinians wait longest and are routinely subject to detention in the pens. The man also recounts a disturbing exchange with a soldier, who told him that he would refuse his offer of medical attention even if he was dying.

The medic was, of course, also aware of the actual life-threatening problems posed for Palestinians by the checkpoint system. Among many such tragedies, a Palestinian woman's baby had to be delivered stillborn at Huwarra after the soldier refused her permission to reach a hospital in Nablus. How, one struggles to wonder, do quiet, innocent people manage to live with the experience of such brutality?

It's worth stopping just to think about this for a moment: an internal checkpoint. The restriction of people inside their 'own' territory, a territory not only occupied but sealed-off by a fortified, electrified wall. It's a remarkable evil. Bad enough that one's country is controlled at land borders by a foreign military force. Much worse that Palestinians in the West Bank can't even move from occupied town to occupied town within those stolen borders.

The Palestinian boy is eventually released, smiling as he joins his awaiting friends. He's not, we must assume, a scheming terrorist, after all. Just an 'impudent' Palestinian who has been punished for his grin. His place is soon taken-up by two other Palestinian youths, the soldier taking away their papers for 'closer inspection'.

Some days later we're walking through an affluent tree-lined street in West Jerusalem, where Israeli parents stroll on pristine pavements while their healthy, happy kids pedal along on smart bikes. I think of the broken 'pavements' at Huwarra and the Palestinians queuing in the searing heat, contained, corralled and degraded by hostile soldiers. And I think of the people locked like cattle inside the Qalandia security pen. And of the facial terror of the small Palestinian boy and his old gran, marched-off like criminals through this Nazi-style facility.

On the West Jerusalem street, it seems inconceivable that an Israeli child would ever suffer such an experience. And herein lies the deep and shameful truth of Israel's view of Palestinians. The checkpoints are just part of what Jeff Halper calls Israel's "Warehousing", a system of control which far surpasses even the standard apartheid divisions in South Africa.

The Palestinians are being treated, notes Halper, as a "surplus people", a mass of humanity to be herded, held and hidden. They are seen not as a community or real proto-state to be consulted or negotiated with, but a 'problem' people over which Israel is pursuing its 'final solution' of permanent subjugation.

The daily misery and tragedy of checkpoint life serves a vital purpose in reminding Palestinians of their expected acceptance of such containment.