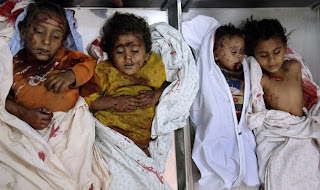 Saleh Ahmad Eid Abu Me’tiq (5 year)
And may the media apologists open their shameful eyes and atone for their own criminal complicity.

Although this is quite a horrible crime, it is also a very rare occurance (thankfully) and the public have laws in place, and the resources to police them, to deal with such crimes. There is nothing more really that can be humanly done to prevent such random crimes taking place.

Unlike Gaza, where British taxpayers are actively involved in subsidising and supporting the carnage. The abuse of children in Gaza we can do something about - stop participating in it (as the great Prof Chomsky would say).

Austrian Children vs Gaza Children
Here is one of those comparative experiments where similar cases and their treatment by the western corporate news media can be compared and contrasted, one with the other
ie East Timor vs Cambodia.