Singin' and dancin' in the rain: GPHRC at Faslane 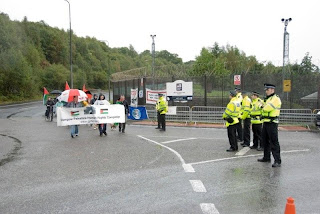 Sunday morning at the Peace Camp, the waft of burning wood from a kindling fire welcoming us as the rain batters down on the makeshift canvas above. That useful Scottish word “dreich” about sums it up.

But, hey, what's a little precipitation when we're all so full of good feeling and a desire to register our objection to these obscene weapons and the economy of death that's keeping it all going.
And what more can we say about the all-weather commitment and 'operational ingenuity' of those living here at the camp? The effort and determination of all the organisers and bloc protesters this past year has been truly inspiring [1].

We set off from the camp in resilient mood along with our fellow contingent of teachers, the ugly base and razor-wire fence soon appearing like a demonic presence among these magnificent lochs and hills. Though few in numbers, there's no shortage of songs, chants and happy banter to keep us all motivated. From somewhere behind the GPHRC [2] banner, our 'dear leaderene' Margaret's resounding tones seem to rise, as usual, several octaves above the rest. What a lady!

On arrival at the gate, the chief of police operations is courteous and welcoming. We, quite naturally, reciprocate. He seems interested in the work of GPHRC and listens thoughtfully to an account of our recent visit to Palestine. The procedural matters of the day are, likewise, explained by him to us. He is, of course, doing his job.

But, it's worth remembering, too, that this pleasant man is still helping to protect and uphold a 'system of deterrence' predicated on mass murder. Indeed, as the recent letter from the lawyers' bloc to the base commander [3] reminds us, Britain's nuclear capability and declared replacement of Trident violates international humanitarian law and the Nuclear Non-Proliferation Treaty. The UK, in short, is acting illegally.

The case for nuclear disarmament is also underwritten by a range of legal and political opinion at Holyrood now opposing WMD in Scotland [4]. The new Scottish Government's declared opposition to Trident raises the stakes considerably. But, even with a substantial majority of MSPs now against its replacement, there's the need for increased pressure on Holyrood to, in turn, up-the-ante at Westminster. However small, GPHRC's lively presence here is part of that gathering effort.

The gazebos erected, falafel, zatar bread and other Palestinian staples happily devoured, it's dabke time, that wonderfully rhythmic, expressive and perfectly choreographed Palestinian dance form. Or, at least, that's how it's supposed to look. Lined up along the pavement, our bemused constabulary keeping a wary eye, it's more dabke meets ad hoc Glasgow line dancing to the laughing assembly. Fortunately, we have among us a fine young Palestinian and exponent of the art. And with his leading instruction, we're soon all tapping and turning, some even in step, to the dulcet dabke beats. 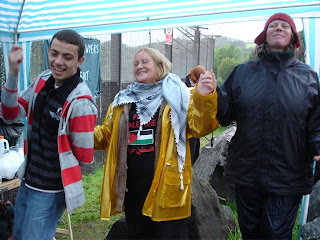 Oddly, the police in the vans and at the gates seem rather less amused as our happy keffiyeh-waving troupe dance off the pavement and onto the roundabout, ringing around it, hand-in-hand, to the turned-up music. A few rush over to call a halt to the reverie, giving stern warnings about our 'dangerous obstruction' of the road. Ah well, happiness is a form of dissent. Some of the teachers carry on the mood of musical resistance with some great old guitar-led protest songs, our collective group all joining in.

Thereafter, a number of us head around to the Coulport base for an additional spot of protest. Again, looking down over Faslane and reaching Coulport, one is reminded of the crass violation of this rolling landscape. 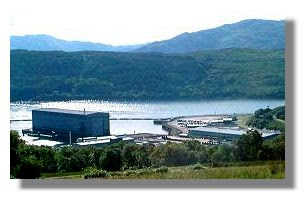 On arrival, our entourage is 'encouraged' back from the main gate by the waiting police. A little jollity and chiding ensues. But, again, we use the opportunity to speak candidly with them about the politics of Trident, pointing out that around two thirds of people in Scotland don't want it or its replacement [5], a view which the UK government is continuing to ignore. So much for the notion of political accountability some of the officers seem to believe prevails in this country.

GHPRC is also concerned to highlight the political alliances and mercenary profiteers behind the same UK/US arms industry that's supplying Israel with the mass weaponry to murder Palestinians in Gaza and the West Bank [6]. From Trident and its offspring to parts for Apache killer helicopters and F-16s, it's all part of the same corporate-driven arms market.

As with our recent efforts to explain the illegality and immorality of Israel's occupation to soldiers at West Bank checkpoints, it's important for those guarding this arsenal of annihilation to be reminded of such basic truths.

It's been another good day of 365 protest; a day of dancing, singing dissent. Despite gesturing hostility from some coming in and out of Faslane base, there's the reminder that we speak for the majority who want this affront to humanity removed.

The sun is finally shining as we depart, stopping back at the camp to thank our kindly hosts for all their assistance. Some of the young Belgian activists are 'preparing' for their upcoming blockade, and we all enjoy a last bit of comradely chit-chat. There's something morally uplifting being among such people.

Now for the Big Blockade on 1st October.